on April 17, 2015
Recently I wrote about the need to expand on my storage space on the PlayStation 4. This was hardly an issue exclusive to the Sony platform, as the Microsoft Xbox One also only shipped with a 500 gigabyte hard drive. The end result? More games than I had space for within the first year. While the process of getting a PlayStation 4 upgraded was a bit more work, the solution for the Xbox One is simple and elegant. With the PlayStation 4, I was required to actually open the hardware up and replace the internal hard drive. I found a solution for roughly one hundred bucks that jumped my total storage from 500GB to 1.75TB. The replacement of the drive was relatively easy, but it certainly took some time. There was the backing up of data and re-downloading of games that took a few days to complete. This is due to the fact that the PlayStation 4 does not support external solutions without using a third party accessory.

Microsoft encourages the use of an external drive, and the entire process is better for it. After reading a bunch of reviews for it, I opted for the Toshiba 2TB Canvio Basics USB 3.0 Portable Hard Drive. Because we are adding onto the current machine, there is no need to back up the data or to go out and reacquire your prior titles. The time saved here alone was awesome, and it was nice not to have to open up the console (something that would void your warranty for the Xbox One anyways).

I first hooked the Toshiba up while the Xbox One was powered down. I then fired up the system and waited to see if it would recognize the drive. It did not. Even when scrolling to the settings and storage options, all I saw was my internal drive. I had to unplug and plug the drive back in (using the slot to the left on the side of the Xbox One console). Doing this prompted the system to then ask me to format the drive and to use it as the default going forward. Selecting yes to those questions initiates a quick format process (less than two minutes) and then the secondary drive shows up in the storage management. 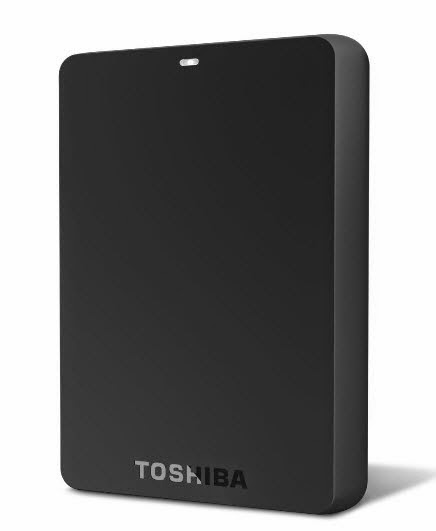 When viewing your games and apps, the storage is treated as a whole. I went from ninety percent used to around seventeen. All in all, it is a pretty painless process that added a little less than two terabytes to my storage space.

The device itself is a nice one. There is no external power needed because it is a portable, so once you hook it up to the Xbox One, it shows a little blue indicator showing that it has power as well. With only one cable (included) and its small size (the drive fits nicely into the palm of my admittedly large hand), it is easy to just tuck back to the side of the console. It does not get hot and the casing promotes itself as shock absorbent (I did not toss it around the room to test that theory. I am all for being thorough, but not at the potential expense of a hundred bucks).

Because the drive actually spins faster than the Xbox One internal and has a 3.0 USB connection, applications loaded just as fast (if not faster) than they did on the default drive. A nice little perk with all of that extra storage space. The regular price on this guy is about $140, though I was able to snag it for about ninety. Definitely worth it at that price.