on April 15, 2015
Hex was an interesting title that came out of Kickstarter last year well above their gathering goals and the new video and information is a good way to hype the title up. 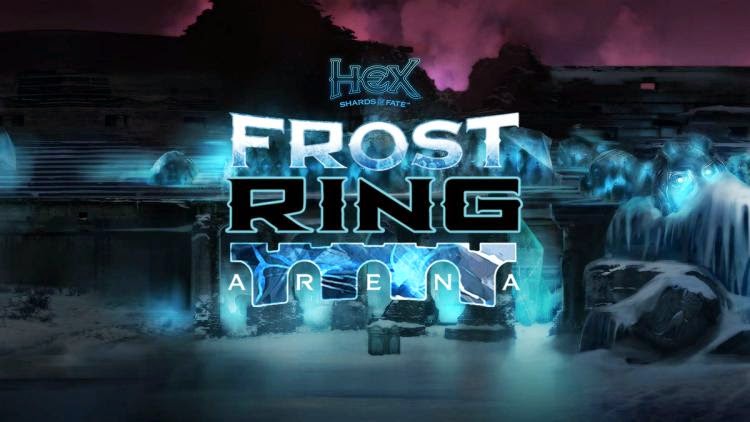 HEX Entertainment and Gameforge recently updated with the first single-player PvE content for HEX: Shards of Fate, the world’s first digital trading card/ Massively Multiplayer Online game. This new content, called the “Frost Ring Arena” offers players the chance to duel against AI opponents, as well as bringing new PvE cards and equipment that broaden the possible number of playable troops, spells and effects. At the same time, Gameforge has announced a global online tournament coming later in 2015 with at least $100,000 up for grabs.

“We are incredible happy to present the first taste of the innovation we promised in our very successful Kickstarter campaign,” said Cory Jones, CEO of HEX Entertainment. “HEX is a huge leap forward in what digital card gaming can be, with the addition of MMO elements and brand new ways to play a TCG, HEX is unlike anything you have played before.” With the Frost Ring Arena, HEX puts a stronger focus on the story line of the world of Entrath, which was hit by the meteor HEX in ancient past. The icy showdown takes place in the high north of this world, the Hyperborean Mountains, where hardly any life can grow. Lost for generations, the Arena was discovered by Hogarth, a fallen mage, who now reigns there and challenges heroes from all over the world to test their skills against him and his legion.

The new Arena splits into four Tiers; in each tier, the players challenges four regular champions and one boss. To guarantee high replay value, the opponents are randomly generated from a pool of 20 normal champions and 6 bosses. The battles against the AI differ from normal PvP fights in that each champion and boss has their own unique play style. Some enemies specialize in a single shard or play style, while others will have specific personalities that define their strategies. As players progress through the Arena, the champions and bosses become harder as enemies begin carrying equipment of their own. Losing three rounds ends a campaign, but players get to keep all their loot even if they don’t succeed in defeating the entire Arena.

The M.C. challenge is a randomly occurring event within the Frost Ring Arena. Hogarth, the master of the Frost Ring, enters the duels and challenges players with certain tests, such as winning a fight by only using a certain type of card or taking less than 6 damage in the match. If the player manages to successfully complete this challenge, they will be awarded a bonus in the form of a buff for the next boss fight.

The new PvE cards are for use in the AI-duels only, while all existing PvP cards can be used in PvE as well. To optimize card and deck management, the update also includes an upgrade to the deck building interface, which now allows players to differentiate between their PvE and PvP decks. Additionally, the update will usher in new card interface and deck management systems, as well as a new chat, making it easier for players to stay in contact.

For those Hex players looking for more head-to-head competition, Gameforge and Hex Ent. will be running a global tournament in 2015, promising a prize pool of more than $100,000. Players registered for HEX: Shards of Fate on North American and European servers will have the ability to earn qualification points through daily tournament play for the HEX Invitational event. Earning ten points will afford automatic eligibility to participate in the Invitational Qualifiers. The invites for the HEX Invitational event will be decided during twelve online qualifier tournaments, which will be free for all qualified players. Those 12 winners will be invited by Gameforge and Hex Ent. to the Studios in Lake Forest, California to determine the HEX Invitational champion.

“HEX combines the world of traditional trading card games with digital features that have never been seen before, resulting in thrilling and challenging duels,” said Carsten van Husen, CEO at Gameforge. “This tournament is our way of both highlighting the growing competitive nature of the game and saying thank you to the community.”

HEX: Shards of Fate had a wildly successful KickStarter campaign, earning over $2.2 million in backing over 30 days. HEX: Shards of Fate was also one of the first Kickstarter projects to deliver playable code to backers and launched Alpha testing for its community of backers in October 2013. HEX is currently in beta testing and expanded its community to more than just Kickstarter backers.