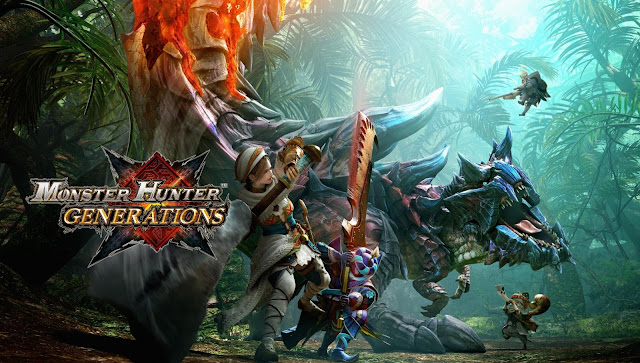 It's that time again! Sorry for the slight delay. Things get complicated around holidays but happy 1st and 4th of July to those in North America for both Canada and Independance Days!

This is a bit of a slower month comapred to the last few but there are still a few heavy titles coming out. Nick's already gotten the chance to sit down to the newest version of Fairy Fencer F and Richard is dying to get his hands on the newest Monster Hunter. Me? Let's say that a new version of Phantom Brave alone has me happy alongside 7th Dragon and I Am Setsuna.

This amazing game of giant car scoccer has done so well for itself that it is now available in physical format! Haven't had a chance to get it yet? What are you waiting for!?!

I've only ever heard of prior versions of Carmaeddon. I'll let the trailer speak for itself but I seriously hope you know a good mechanic.

Romance of the Three Kingdoms like Nobunaga's Ambition is an older series seeing the newest generation of hardware for the first time. Need to satisfy that tactical domination itch? Then attempt the unification of China without setting onto the battlefield yourself and hoping that all your planing does indeed go according to plan.

While perhaps not being as fast paced as Ratchet and Clank, Resistance, or Spiro, Insomniac have created a beautiful looking game about a woman looking for her father in the depths of the ocean.

On the back of an HD version of Resident Evil 4, Resident Evil 5 is back in HD for some of the fastest "zombie" action that the series has seen.

7th Dragon III Code: VFD is the first of the series to see a localization outside of Japan. Been needing an RPG after Bravely Second? It's almost here!

Who you going to call? The internet company for more bandwidth as the ghosts are taking up all the space!

With the new movie coming out there's a new game. Four player coop? Even better.

Killing time if not his thesis, Richard is just waiting for this to release. I mean seriously waiting for this one to release as he's just been itching to get a new dose of one of his favorite series. Only ten days left to go before hunting these gigantic beats and making your own sweet armor sets starts again!

Just a little bit late behind the PS4 version which releases back in October, MX vs ATV Supercross Encore is releasing for the Xbox One this month.

Even if it is only releasing digitally, I think a lot of people have been waiting for the release of this one. It gets two trailers. The official trailer from its website and the E3 trailer from earlier this year.

Phantom Brave has seen multiple releases over the years from its original PS2 release over to the Wii and the PSP finally coming over to the realm of PC. This is pretty much one of the best damned games that NIS/NISA have ever released beside Makai Kingdom and Disgaea 4. There, I've now said it!

Phantom Brave was one of the first NIS titles that didn't use a square grid like the other games before it and set about a whole new tactical based experience with characters that could only exist for so many turns before retuning to their ghostly forms. What of the story you ask? That's for you to find out!

Um... other than making me think of a few crazies from Bioshock, I'll let the trailer do the talking.

Need some fast paced racing this month? With 291 Riders, 47 Tracks, and 15 Game Modes I think Valentino Rossi will have you covered.

Fairy Fencer F originally released on the PS3 and has seen a PC port. Simply put this game took part of the Neptunia formula and made something new, different, and unique which has been a lot of fun. Having both enjoyed the PS3 and PC versions, I'm looking forward to the extra content that Advent Dark Force is set to unleash upon us. Want to know how the newest version that contains an expansion plus the original handles? Check out Nick's Review!


Shiren the Wanderer: The Tower of Fortune and the Dice of Fate - PSV

I've personally love this roguelike series as it doesn't hold its punches. Having originally released years ago on the DS in Japan, the Vita version which launched last year is finally making its way to the rest of us for some serious dungeon crawling.

The 2D sidescrolling skateboarder is back. Even bigger than before it's even seeing a physical release.


Article by Pierre-Yves
Information by Jim