on March 18, 2015
AeternoBlade is a Metroidvania following the story of a warrior named Freyja on her quest for vengeance for the destruction of her village at the hands of an Demonic Overlord. Originally released on the Nintendo 3DS this time last year it is seeing a re-release on the Sony PlayStation Vita / TV platforms. 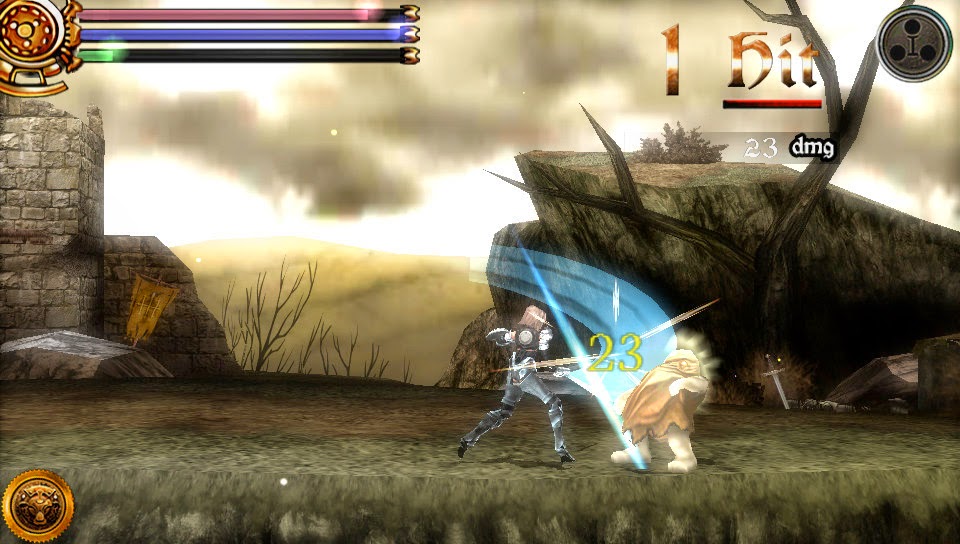 Starting off, players will find themselves wondering about the mechanics. Graphically reminiscent of the PS2 era (which is a personal favorite and I found Freyja to look like a medieval version of the original Kos-Mos) movement and attacks could feel a bit stiff. This made learning the timing of some of the larger or more powerful enemies quite necessary. By the end of the first stage I had found the groove for enemies big and small and I was overall less worried about my health and seeing the Game Over screen than I had been prior. The Game Over screen itself offers two options. The first was to restart from that current portion of the level while the second was to restart from the previous checkpoint. Whether the first or second was chosen the load time was quick and painless sometimes making a trip to this screen the faster of the options if a mistake had been made in the platforming. All of this being said, it is the icing on the cake.

After the first stage is complete, Freyja obtains access to upgrade both her stats and her weapon skills. Freyja’s stats start off with simple upgrades to Health, Attack, and Magic but as time not only are new powers available but existing upgrades can be made even better. Each upgrade requires yellow orbs that can be acquired by defeating the multiple enemies that can be found throughout each stage. Like any form of system using RPG like elements, each upgrade is decision that much be taken according to what is deemed to be the most necessary or useful to the player at that point in time.

Alongside the stats and the skills, Freya also obtains the use of relics that enhance different abilities or stats. Relics, like Freyja’s stats can be upgraded but in their own manner. Starting off with access to simple modifications to either add more attack power or HP, Relics can be boosted by acquiring Relic Power Up items scattered throughout the stages. These items unlike the skills and stat purchases with yellow orbs can be added or removed as the player sees fit depending upon what they need. Following the same premiss however, Relic like Stats and Skills have the ability to upgraded even further as time goes on. Eventually relics can be found to increase health drops from enemies, or add power in direct proportion to the the combo count. 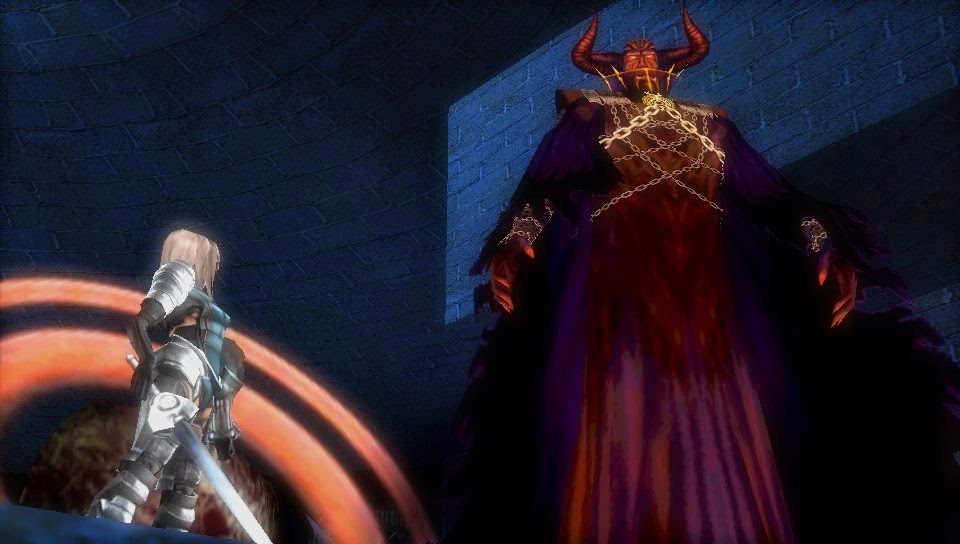 Once skills start to be learned and upgraded, AeternoBlade goes from feeling somewhat stiff to rather smooth with new flowing abilities from horizontal to vertical circular spinning attacks that allow quick movements across the screen. Following along with these possible upgrades are the upgrades that happen in tune with the story in which the titular AeternoBlade itself receives upgrades that allow for the manipulation of time.

Time can be manipulated in different manners that are all in their own rights useful and sometimes requires you to solve various puzzles or even difficult combat situations. The first of these allows Freyja to rewind time not unlike the Prince with the Dagger of Time in the Prince of Persia. Rewinding time can only really be used to prevent an untimely death. While that can seem a bit restrictive, it is in the second ability that players will find themselves using the most to help guide Freyja to her goal.

The AeternBlade while being able to prevent an untimely death also has the ability to rewind time for everyone else while allowing Freyja to continue on in real time. This can be used for puzzles that require multiple devices being used at once but would be impossible to do so if time was being access in a linear fashion. What it also does is allow for players to continuously assault enemies as they are stuck rewinding in time but can still receive damage giving an edge that would not otherwise be possible. The last of the sword upgrades is a simple yet truly marvelous and effective ability allowing Freyja to instantly teleport back to the point of origin. While not really seeming like much compared to the other two, this will show itself to be just as useful when the time is right. 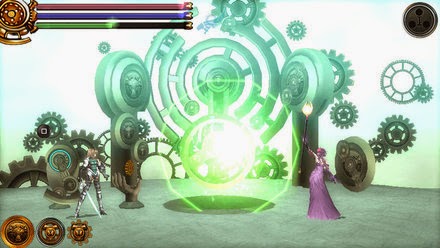 Enemies come in several flavors but regardless of the size if you’re not paying attention there could be a spike pit awaiting as they knock you down or off of a platform. There is a bit of enemy recycling with colour pallet swaps but as things continue there is a switch up of the style of enemies that require different approaches either because of their flying abilities or because they are much closer to the ground or even jumping out from underneath it. Mid bosses can be found in most levels upping the challenge rating in several cases as these fearsome beasts come with several different attacks instead of one single one. They are however always worth the yellow upgrade orbs to seek them out again after the initial encounters.

As smooth as AeternoBlade becomes, there were still a few tiny issues that could make going through certain portions of the game more of a chore than anything else. There are certain zones that go into lock down the moment that you step into them. The first few times was fine, but having to come back and explore these zones only to have to fight your way out again and again could get very old very fast especially when looking for that one particular passageway that you are not quite sure as to where you saw it. While that may not seem like much, this was every time that you crossed into these zones instead of them simply being unlocked after the first time through which would have been much better.

AeternoBlade while starting off a bit slow, gradually picks up its pace until things reach a point where players will be reacting more than thinking in several situations. Combining a very well designed evolving combat system and Metroidvania exploration worked out very well especially when trying to figure out how to take out certain enemies. I’m looking at you pyramid boss.