on March 19, 2015
Warmachine has been around since 2003, living in the shadow of other tabletop wargames such as Warhammer Fantasy and Warhammer 40k, though their unique take on a very steampunk-style sets them well apart from some of the juggernauts.  With a lot of traditional tabletop wargames the focus tends to be on setting up a solid defense then turtling your way towards your enemy and in a gamble to be different than its larger brethren, Warmachine's rules are far more rewarding to the aggressive player. The concept of hunkering down and forcing your opponent into your elaborate defense is nothing new, but Privateer Press wanted something a little different. "Audentes Fortuna Adiuvat," or rather "Fortune Favors the Bold" seems to be a driving force behind Privateer Press's ruleset, but the question is, does fortune really favor the bold in Warmachine?

One of my biggest pet-peeves in wargaming or miniature models is sloppy model designs and barring that, poor instructions/guides in building the actual models. Upon the first run, the largest time investment will be spent snipping the unit from the sprue, then gluing them together, then priming, then painting. All in all it can be a massive investment up front and when the manufacturer does not provide adequate guides or instructions for models that, in some cases, can be upwards of 30 parts (looking at you, Robotech Tactics RPG), things tend to be more frustrating than not. While I am not a fan of kits that have the models already removed from the sprue, I have to hand it to Privateer Press since they remove the units but place them into separate bags for easy organization and even easier building.

Since the starter box is actually quite thin, only about an inch or so thick, maximizing the space in as small of a package as possible is crucial and rather than just piling all of the pieces together, as found in the starter boxes for Relic Knights (read my review at: http://www.chalgyr.com/2015/02/relic-knights-shattered-sword-black.html), they organized everything and made it as simple as possible for any new or veteran wargamer to be able to open up, quickly build the models and get on their way. Add to the wonderful packaging skills, Warmachine has a couple of quick guides in the box that have instructions for the more intricate units, such as the Protectorate of Menoth Crusader Warjack or the Khador Juggernaut Warjack, which are two of the 17 or so pieces that come in the Warmachine Two-player Battle Box that we have on hand. The smaller units, such as the Man-O-War Shocktrooper (Khador) or the Exemplar Cinerators (Protectorate) are very easy to build; first that each unit has only about 4 or 5 pieces to them so you will not be spending much time gluing them together.

Given that the models were not on the sprue there were a number of posts that needed to be trimmed and filed down, but for the most part the individual units went together quickly and efficiently. Painting, like any miniature wargame, is a rather time consuming process given that there is priming, undercoat, top-coat, detail coats and then highlighting and drybrushing; it can be tedious unless you look forward to it (which I do). 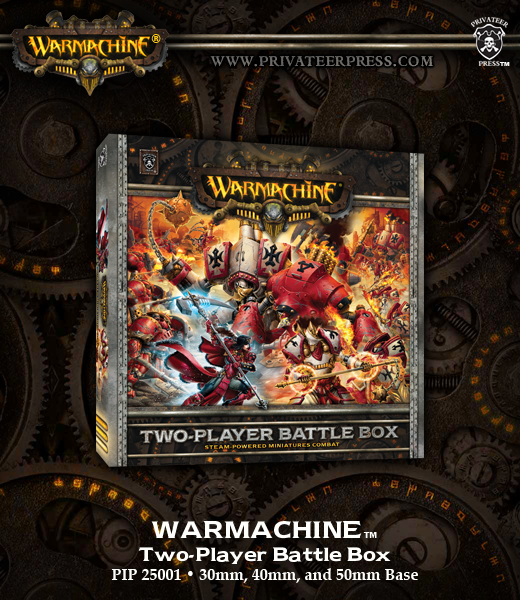 Once you get your models squared away it is simply a matter of deciding your skirmish size (based on points / army size) and any particular scenarios that you may have running, and then it is off to the races. One thing that I found far more interesting in Warmachine than I did in other tabletop wargames is that this one felt like it had the potential to be a mix between a standard D&D campaign and a brutal wargaming match. The way that Privateer Press has set up the rules is ingenious; it is designed to work perfectly well with a grand and sweeping storyline or for the more brutal adrenaline junkies out there, just put together two or more giant armies and slug it out. Either way it works, and it works well. The concept is not new, as Warhammer / Warhammer 40k and newer games like Robotech RPG Tactics do this as well, but Privateer Press has managed to put together a whole world that is quite complete, quite rich, and downright fun. Something that has taken upwards of two to three decades for other franchises. Well done indeed.

Once you choose your battle size it is on to placing your units; given the scalability of forces you can actually play on something as small as a 3.5 foot circular coffee table (as I did on one occasion) or you can break out a solid 4x6 foot table (as I did on a few occasions) and still have just as much fun. After the first game or two we found ourselves spending far more time putting together the actual table terrain than we did really setting up our army, since the way that you will literally crash through everything on the table is an absolute blast. After placing your terrain you will place your units, roll to see who goes first then it is off to the war. I had mentioned that "Fortune Favors the Bold" as a potential driving force for Warmachine and that concept is truly proven with the first turn. Each model, whether they are the colossal warjacks, the various squads/units, or the ever important warcasters, has attributes, special abilities or skills that allow it to wreak havoc amongst its enemies.

Warcasters can cast supporting spells to buff units turning them into veritable killing machines or they can focus their energies on destructive spells designed to capture enemy models / warjacks and turn them to your tide. While the warcasters seem all powerful, that power comes with a price and successfully planning how you are going to spend your Focus ('mana' if you will). There were more than a few times where I or my friend would mismanage our focus and it would spell doom for the game. While each game generally ended within an hour with the battle box, larger games could potentially last far longer, especially if all seven factions are represented (Khador, Cygnar, Protectorate of Menoth, Mercenaries, Retribution of Scyrh, Convergence of Cyriss and Cryx). Given the fun I had with The Protectorate of Menoth, a faction that seems inspired by The Knights Templar, I am itching to get my hands on the Convergence of Cyriss with their angelic appearance (not to mention the Servitors kind of look like Guilty Spark from Halo).

Anyhow; once we got past the first few turns, navigating the 80+ mini rulebook, we truly did find that matches quickly evolve from a chess-like back and forth match into wave upon wave of warjack-lead spearhead attacks design to hit as hard as possible. One thing I would caution though is that the intensity of each fight can, and will, get loud. Very loud. Try to keep it down, else the neighbors may get a bit upset.

Even though I have been playing wargames on and off for years and Privateer Press's Warmachine line is one I have had my eyes on for the last ten years, I had no idea what to expect once I got in game. I can say that I am quite upset with myself for not having gotten into the series earlier, since it is some of the most intensely strategic and absolutely chaotic wargaming I have ever experienced. Privateer Press set out to make a name for themselves and it is easy to see now, why they have stuck around for so long while so many others have fizzled out and died. Wargamers should rejoice Warmachine's steam-filled cyperpunk-style world is here to stay and that is a great thing.