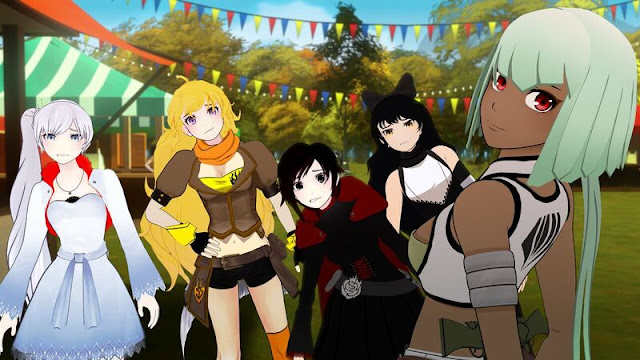 Rooster Teeth; vaunted creators of the longest running web series in history, Red vs. Blue. In 2013 they debuted RWBY, the animated series created and produced but the late, beloved, and sorely missed Monty Oum. Released originally as a series of short webisodes on their website (and later to other streaming services like YouTube, Crunchyroll, and Netflix). RWBY's first "season" was released on Blu Ray as Volume 1, which combined the first 12 or so episodes into something of a feature-length film. Near the end of 2014, Rooster Teeth released Volume 2, the combination of "season 2" and after a year of frothing at the mouth, Volume 3 was released on May 3rd, 2016. I was fortunate enough to grab a copy of the latest Blu Ray release and true to form, am thoroughly impressed with Rooster Teeth Production's latest RWBY release, the first after the passing of Monty Oum.

Prior to digging into the latest release I want to throw out there a bit of a synopsis for both Volume 1 and Volume 2. Minor spoilers may occur from this point down (though I will avoid them if I can), so consider yourself warned.

Volume 1 synopsis: Volume 1, as a continuous "feature length" film feels a bit disjointed at times, as it is difficult to combine multiple arcs into a single, unbroken 2 hour long film. The first third of the film, or "arc," introduces the primary characters for the series: Ruby Rose, Weiss Schnee, Blake Belladonna and Yang Xiao Long (Team RWBY, pronounced "ruby"). Character development is solid, though the second "arc" (or middle third of the video) focuses on the secondary characters, Jaune Arc, Nora Valkyrie, Pyrrha Nikos, and Lie Ren (team JNPR, pronounced "juniper"). The third and final arc introduces a series of sub-plots and a general overall "arc" that the series would presumably work towards resolving.

Volume 2 synopsis: Starting off directly after the end of the first Volume, Volume 2 introduces more villains, amongst whom is Cinder, voiced by the incredibly popular cosplayer Jessica Nigri. Over the course of nearly 2 ½ hours, team RWBY is given significant character development, especially Blake. The pacing for Volume 2 is far better than the slightly disjointed Volume 1 and ended in a more satisfyingly manner.

On to the meat of today's review … Volume 3 on Blu Ray comes neatly packaged in the traditional Blu Ray case and contains a pair of monochromatically adorned discs. Like most Blu Ray movies, you receive an actual Blu Ray as well as a standard DVD, and when viewing in their respective players on appropriate displays, both are stunning. This is likely lent to the CG-style animation that is used throughout the series, but the DVD version looks sharp and crisp on my old 1200x800, 2010 MacBook Pro, though the colors are significantly more vibrant, lines are sharper, and the overall look of the Blu Ray disc played in my PlayStation 4 on my 1080p television still puts the original DVD to shame. 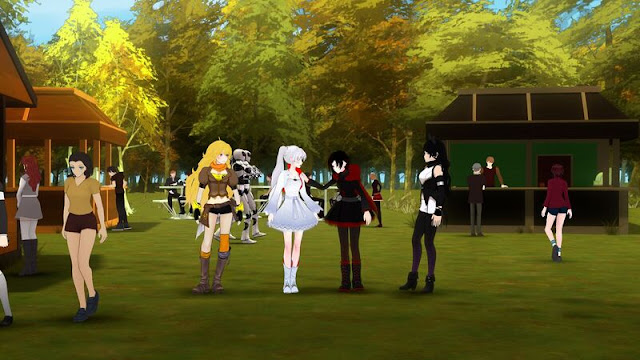 On the subject of animation quality, you can certainly tell that even between Volumes 1 and 2, Rooster Teeth animators and artists significantly improved. Backgrounds are especially noticeable when comparing the first season to the third, but that is not all. In Volumes 1 and 2 the action sequences are to die for, but the times between action scenes feel a bit wooden at times; forgivable in my opinion, because the action is simply THAT GOOD. Volume 3 steps it up a notch and truly looks like a tradition CG+painted anime, which gorgeous models, wonderful lip syncing, and utterly stunning backgrounds.

Running along the same vein is the voice acting; RWBY started strong with voice acting, but the series has only gotten better (Weiss especially; I am utterly smitten with Kara Eberle  and am fairly certain I would be reduced to a gibbering idiot were I to ever meet her). The actors' growing experience is definitely showing, as there is far more feeling in each character. In terms of audio the series is excellent, and Volume 3 is the crowning example of quality American voice-acting, however … The music, which was stunning in Volume 1, seems to have taken a back seat in Volumes 2 and 3, foregoing the voiced punk/rock motif of the first Volume, and moving towards a more instrumental aspect in the later Volumes. Not terrible, but a step backwards, and while not distracting, the music does not have quite the punch that it did in the first volume (though the songs with lyrics do appear occasionally in Volume 2, they do not appear as often as Volume 1).

Given how Volume 2 ended, I was unsure how Volume 3 would start; while the overall arc has yet to be satisfied, Volume 2 ended at a fairly solid arc ending. Volume 3 opens with an anime classic … a tournament (that is briefly mentioned in passing in Volume 2) and while the action is superb and art stellar, what I was completely not expecting was how freaking funny the first half hour of the show is. I am fairly certain that the single best line in the series is "Silence you boob!" Said by the ultra stern big sister of Weiss; the way she says it is just … hilarious (helps that it is accompanied by a hearty open-handed slap). Setting the relatively light tone at the start keeps on throughout the Volume while balancing some relatively heavy actions and an arc that is by far the best in the series to date. Frankly put, I can only imagine Monty Oum would be proud and honored.

In addition to the feature length "film," there are a handful of trailers and extras on the Blu Ray disc. I strongly recommend spending the hour or so it takes to poke through the trailers, the audio commentary (which is great) and the Behind the Scenes featurette.

RWBY Volume 3 on Blu Ray is absolutely a must have and shows the growth and evolution of Rooster Teeth Productions, as it contains the best of all of the aspects that made Rooster Teeth who they are today. Swing by the Rooster Teeth store to buy the collection now: http://store.roosterteeth.com/collections/rwby 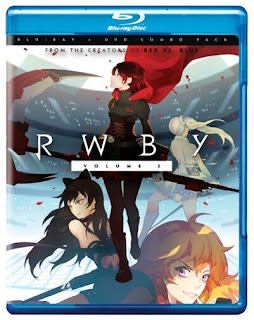 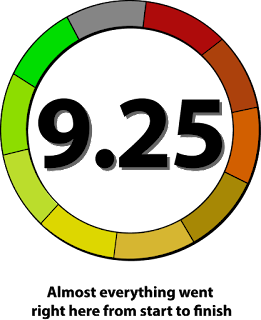