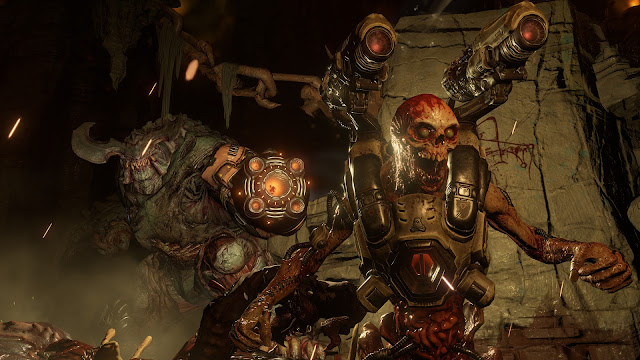 When you think Doom, you think fast-paced, difficult combat, with enemies in every direction and a hellish landscape around you. Luckily for us, this is what we get in the remake for this series, something that meets every expectation. The campaign offers what you’d generally expect from Doom, you start off almost immediately fighting, with little in the way of tutorials at first.

If you choose a higher difficulty, the game can be challenging, and very much reminiscent of the original. The game is generally played through in separate ‘arenas’, fighting swarms of enemies to unlock the next area. You get more weapons as you progress, starting with a laser pistol, and soon after getting a combat shotgun, and going on from there. You can get a chainsaw, swapped into, with low amounts of fuel available, that will insta-kill a monster, with varying uses of fuel depending on the strength of the monster.

This is a good segue to talk about the mechanics of the game. On the surface, it looks like a general shooter, and aside from controls, seems to play as such. But this is a lot different to play compared to modern day shooters, such as CoD, Battlefield, Destiny, etc. and it ends up feeling much more akin to that of Quake or Counter Strike. Moreso the former though, with quick movement and insane shooting throughout the entirety. It, well, feels like Doom through and through. Mind you, I haven’t much played the earlier games, but I know well enough about them to make the comparison, it’s very similar. 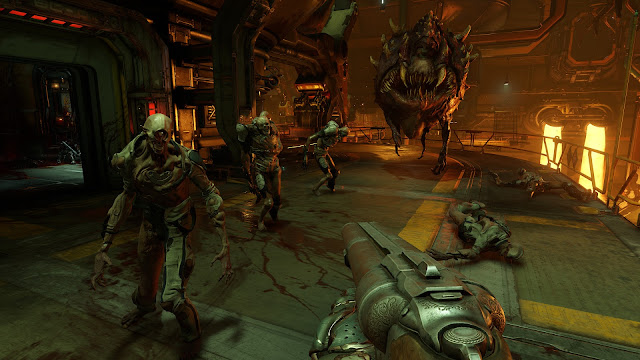 The campaign isn’t all we have, however. There are two other modes in the game, and the next one of note would be multiplayer. Given a variety of different modes to choose from, there’s actually a bit of interesting stuff you can do. My favorite mode is ‘warpath’, akin to CoD’s hardpoint mode, but instead, this is a constantly moving zone that you must stick to. The guns in the multiplayer are all very varied, and have their uses. I largely enjoy using the Super Shotgun with the Rocket Launcher, because of the raw damage output you can put out if you get in range. And speaking of such, in place of a multitude of grenades, you can take a personal teleporter, the most interesting and, in my opinion, useful of the equipment choices. It’s a small device that, when thrown, can be reactivated to teleport to wherever it is, either midair or at its landing point.

On top of these, there are powerups that you can pickup midgame, differing in strength either depending on playstyle or weaponry. The powerups consist of 4 different types, with haste, invisibility, quad damage, and regeneration. They all work really well, but for different play styles. Invisibility is great for both assassin types, or for people rushing objectives, but also works well for snipers, keeping their position difficult to pinpoint. Unlike most games, invisibility is powerful here, and nothing directly lessens the effect, whether it be moving or firing. However, your shots are still visible, and slightly light up your silhouette, so it’s still possible to find you if you’re not careful. Quad damage does what it sounds like - quadruples your damage - and is very powerful for certain weapons. It’s obviously good for most anything, but really shines on snipers, shotguns, and rocket launchers. The super shotgun is especially amazing with it, insta-killing anyone in one shot, and shredding through demons. It can also be great on the Chain Gun, increasing your DPS insanely high, for quick time to kill on almost anything. Haste and regeneration are the least exciting, but still useful. Haste speeds you up, obviously, and makes it hard to hit you, while giving you an edge on the opponent, if you can control yourself with the speed. Regeneration adds to your health and armor, as they’ll restore themselves over time, and even overcharge you, if you’re in good enough health. 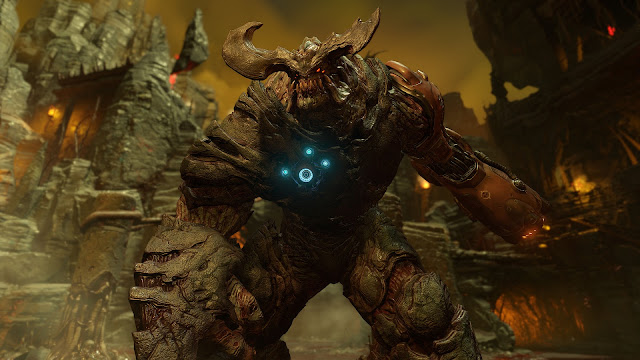 On top of the basic power ups, there are also special weapons and demon drops. The weapons are all extremely powerful, and work for different situations. You have the Gauss Cannon to start, which, while explosive, is still a precision weapon, but if you land a hit, you know they’re going down. No one will survive a hit from this weapon, and no one behind them will either. Or anyone behind them, and so on. It’ll cut through your foes like a hot knife in butter, and doesn’t stop for anything short of a wall. The next weapon is a chainsaw, something you need to close in on someone for, but will reward you greatly in doing so. It can shred through anyone with ease, and make quick work of any demon - just make sure they don’t get you first. The final weapon drop, something anyone will recognize, is the BFG 9000. Back in its full glory, this explosive weapon will destroy anyone in a fairly large area, with an impressive light show to boot. If you need to clear an objective, be it a flag in domination, or the entirety of the warpath zone, rest assured, this will be your friend.

Demons are a bit different in the drop system, but amazingly fun and powerful nonetheless. To become a demon, you have to find a ‘coin’, which will transform you into a certain type of demon, dependent on what you chose at the beginning of a given match. This coin will drop upon you dying, and is locked to the enemy team for a given amount of time, before it can be picked up by anyone. The amount of time you have to play as a demon is based on what coin you pick up. The very first one will be full time, whereas any subsequent coin picked up from a killed demon has time taken off of it, from whatever the prior demon had used up. There are 4 different types of demons - The Baron of Hell, Revenant, Prowler, and Mancubus. With their strengths and weaknesses, some demons excel more in certain situations compared to their brethren. The first of the demons, The Baron of Hell, is a big tough guy, excelling in brute force, with instant kills from melee attacks, and brutal executions. He also has a ground pound, which does a large area of damage, to keep people from kiting too much. However, he’s relatively slow, and has a few defined weak points on his body, on top of having no true ranged attack. 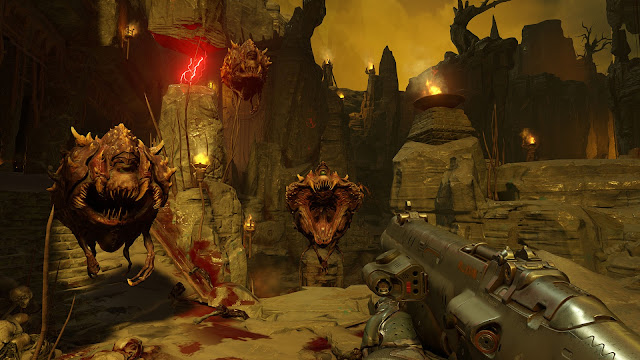 The Revenant is pretty awesome, and feels more akin to the player character than the rest of the demons. Wielding a jetpack and dual rocket launchers, the revenant excels in killing from a range, and with accuracy, whilst moving quickly to boot. Its biggest issue is that it’s a big target with a lower amount of health than most of the other demons. Rounding out at the lowest health would be the prowler, a quick moving demon that jumps from location to foe, and back again. It dies in almost no time, but it’s tiny, and quick, and it will kill you dead in a heartbeat. The final demon type, the Mancubus, feels akin to a mix of both the Revenant and The Baron of Hell. He’s tanky and huge, but he’s on the slow side, with rockets as his main weapon. They’re inaccurate but hurt, and can clear rooms out easily. Eventually, you need to vent your heat buildup, and anyone nearby will regret choosing to pick a close quarters fight with you when you do this, because it’ll kill any enemy within the vicinity.

The last mode to talk about is the snap map, something that seems similar to others, but in play is much different. It’s, at the core, a map creation tool, where you ‘snap’ together rooms to create a sort of dungeon, where you can create chaos to your heart’s content. It actually feels really great, too! Unlike most level editors, where it’s hard to capture true depth, these levels feel like they fit alongside the campaign levels, and you can still do some pretty creative stuff with them, if you don’t feel like making a gorefest. This isn’t a mode I’ve delved into much myself, preferring to stick to the campaign and multiplayer side of things. That being said, this is certainly an impressive tool, and you can create something amazing with this if you wanted to, so I’d say it warrants a try, if nothing else.

All in all, this game holds up to what people imagine DOOM to be, with a scary atmosphere, fast paced gameplay, and gut wrenching difficulty. It’s not for everyone, even those that like most shooters, because its gameplay is vastly different from the more commonplace FPSs around right now. If you like games such as Quake, or even Counter Strike, you’ll probably feel right at home in this. With a powerful multiplayer on top of a bone crushing story, you can have a ton of fun playing this game even without the added feature of Snapmap, letting you create your own DOOM scenarios with ease. Easily an amazing game, but not one that anyone can get into easily. 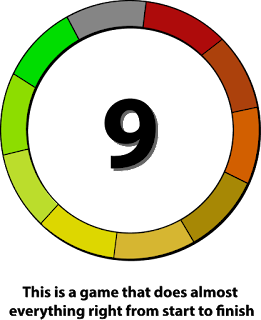