on August 28, 2015
When you have something that works, it can be a risky proposition changing things up. You risk alienating your core fan base. When you keep things the same, you also run the risk of boring gamers with each similar iteration. Credit goes to Spike Chunsoft for managing to find the delicate balance between the two extremes and find something that is still absolutely worth playing. 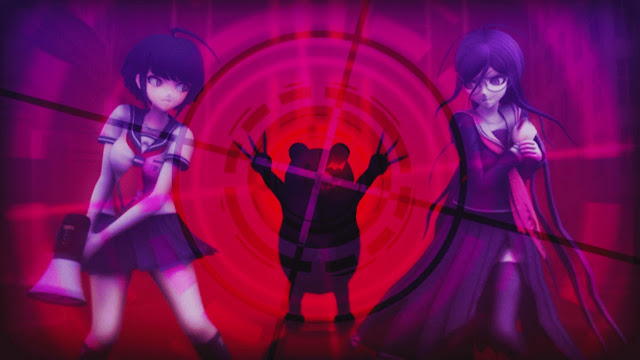 Danganronpa: Trigger Happy Havoc and is sequel Danganronpa: Goodbye Despair are two of my favorite PlayStation Vita games to date. The initial title caught me completely by surprise, striking a near-perfect blend of gameplay elements with the visual novel format. The characters were distinctive, the writing was sharp and the story was incredibly memorable as you tried to navigate Hope's Peak Academy. Goodbye Despair was more of the same - but that was a good thing. I was impressed with how the tone managed to persist despite a new cast and location. Equally impressive was how quickly that game got turned around and localized for North America.

Danganronpa Another Episode: Ultra Despair Girls is nestled between the two games in the timeline, and at first I was a little apprehensive. The first two Danganronpa titles were released quite close to one another, but they were very similar in structure, meaning that the team did not have to reinvent the wheel. Here Ultra Despair Girls is a completely different type of game - more of an action title as strange as that might sound to those who have played the other two titles. 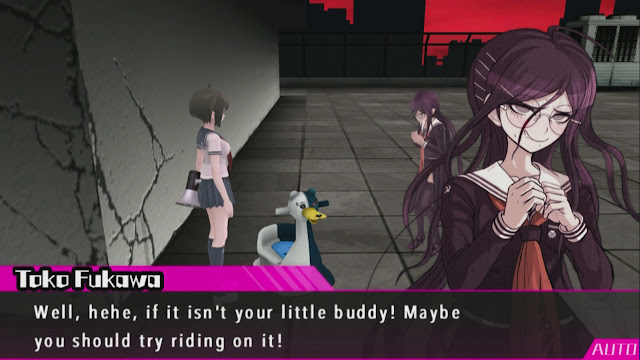 The story here features Komaru Naegi (if the name seems familiar, that is because she is the little sister of our protagonist in the first game) and Toko Fukawa (also a familiar face). These two characters are exceedingly different from one another, yet their circumstances force them together when they would likely otherwise want nothing to do with one another. While this is hardly the most original idea for a storyline, it works beautifully here as both characters actually grow and develop a great deal throughout the run of the story.

The fact that you control two different characters throughout the game is one of the three most notable changes in direction for this series. The second is that you see much more of the world and what it has been going through. No longer isolated just in Hope's Peak Academy or stuck on a remote island, our protagonists are wandering the streets. The other is in the actual gameplay, which is not the smoothest of shooting experiences. There is a puzzle-like feel to it all, because of the different types of ammo the girls can use and how they deal with the oncoming Monokumas (I love/hate those deranged things). So now instead of a visual novel where you move about the environment searching for clues in the style of old school adventure games, you have a fully realized 3D over-the-shoulder shooting experience. 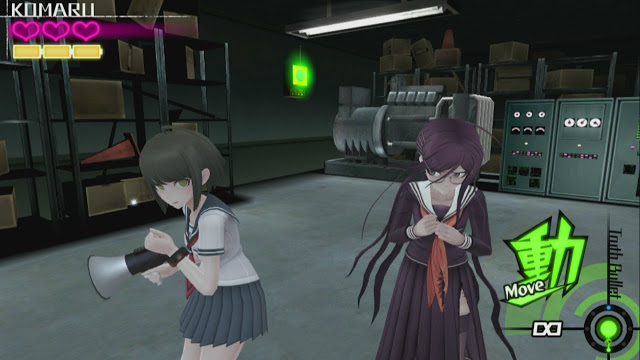 The controls are a bit clunky during combat, and the pacing is sometimes just a bit off. Thankfully the different kinds of ammo really help make the experience more fun than it would have been otherwise. Letting those psychotic robot bears get too close can lead to all sorts of trouble, since your characters are generally meant to deal with them at range. However, Toko's alter ego (if you do not know what I am referring to, hurry up and play the first game) helps to level the playing field in those situations and leads to some delightfully chaotic carnage.

Admittedly the new format took me some time to adjust to. In a game that takes about eighteen hours to beat, it is asking a fair amount of the player to spend an hour or two getting adjusted to the gameplay. The controls never really fully acquit themselves as well as they should have in a shooter, but the game was still a good deal of fun and I could appreciate the team doing something new outside of the prior visual novel format.

As a game with a ton of text, I can appreciate all of the work that goes into localizing not only the text, but the numerous voiced scenes as well. It was great hearing some of the returning voice actors reprising their roles and the voice acting, like the music, is outstanding. Both of the prior Danganronpa games had outstanding soundtracks, and this entry of the series fares just as well. As for that aforementioned text? Let's just say that Ultra Despair Girls did not completely ditch its visual novel roots. There is a lot to read here, and I am okay with that, because the writing is just as good as ever and it really adds life to the dark story.


As for the story, it is worth mentioning that the Danganronpa games are dark. They always have been and I certainly hope they always will be. They deal with themes such as despair, the value of life and examines relationships from several different angles. They make for outstanding if grim reading, and amazingly Ultra Despair Girls ramps these themes up even further than ever. Some of these topics, especially given the ages of the characters involved, are unsettling. They work because there is a great deal of depth to the story and it certainly helps to make the characters who they are, but the topics and tone will not be for everyone. All of that being said, perhaps most exciting for me personally is that there is very clearly the foundation for a Danganronpa 3 (if not more). The story told in Ultra Despair Girls feels complete and satisfying, but also as though it is part of a much larger narrative.

Danganronpa Another Episode: Ultra Despair Girls managed to surprise me yet again. While the second Danganronpa was more of the same excellence found in the first title, this episode does something quite different. While admittedly the action sequences are a bit stiff and not my favorite aspect of the game, it becomes more fun with time and does not take away from the experience. For those who might have been growing tired of the visual novel format, it is certainly a breath of fresh air. Everything else about Ultra Despair Girls exudes the same qualities that the rest of the series has to date and it leaves me hopeful for more to come.