Having originally been released back in 2014, Atlus and Arc System Works' Persona 4 Arena Ultimax has re-entered the ring. Featuring characters both new and old, new adventures and mysteries once again arise in the small town of Inaba over the course of Golden Week.

While Persona 4 is currently my favorite in the series, Persona 4 Arena Ultimax wasn't on my list as much as I love both Atlas and the work that Arc System Works does. While I enjoy a good 2D anime versus fighter, at the time that it was released it wasn't something that I was currently up for losing repeatedly which I see now was a giant mistake. Not only is the system actually friendly enough to come into, it's the sequel I never realized I could have already had.

Taking it from the top, Persona 4 Arena Ultimax is a direct sequel to Persona 4 / Persona 4 Golden taking place a few months after the end of the original events. Having formed an investigative team to solve murders involving a world that existed inside of televisions, the now named protagonist Yu Narukami, Yosuke Hanamura, Chie Satonaka, Yukiko Amagi, Kanji Tatsumi (my favorite P4 character), Teddie, Rise Kujikawa and Naoto Shirogane are back for another round of Midnight Channel Madness with something called the P1 Grand Prix being hosted by none other than the adorable Teddie!? 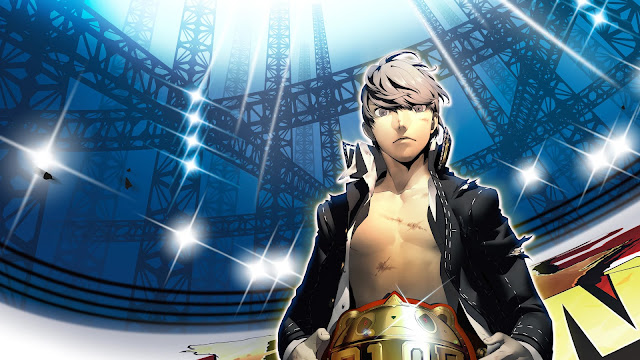 Having originally thought that this would be nothing more than a brilliant 2D anime versus fighter by Arc System Works with a skinning of Atlus’ Shin Megami Tensei Persona series, I had passed. It’s not “just” that instead hosting in its final version several different stories with different points of view from both the Persona 3 and Persona 4 casts as they get wrapped up in the latest of the world’s crazy events involving the realm of shadows and egos of the mind.

These stories are also not only very well presented, but you’ll be spending at least an hour to an hour and a half per character just to see a “To be continued…” notice throwing you into a cliffhanger as to what comes next. Having no other choice, you’ll have to pick another point of view and see how events play out from that perspective before it as well hits that dreaded cliffhanger. The approach works very well for the story being told as while it’s done away with large scaled dungeon crawling and JRPG grinding on time limits, it’s instead replaced with quick fighting matches before moving on to the next part of the story.

Having started the various Persona 4 related stories with the protagonist however I think may have been the biggest treat to the experience. Persona 3 (Org / FES / Portable), Persona 4 (Org / Golden) and the latest Persona 5 (Org / Royal) have all had silent protagonists who other than maybe saying “Persona” only “say something” through your dialog choices. Persona 4 Arena Ultimax however has given the Persona 4 protagonist a whole personality, voice acting and, also applying to every point of view, an internal monologue. It felt weird at first but it was so nice to see them have life other than one or two options on a menu. 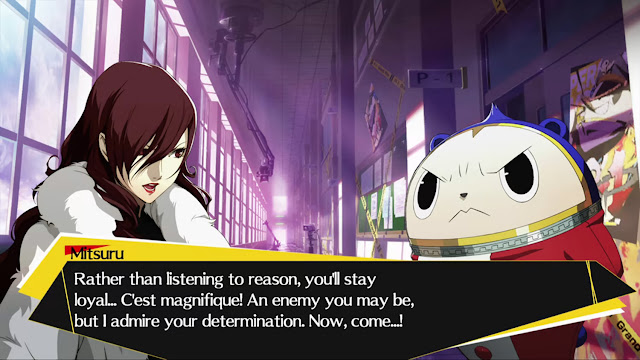 The addition of internal monologues to every character only enriched the stories being told as you were really seeing events from their point of view externally and internally. While some characters may not have been at the top of my go to list in the original titles of both Persona 3 and Persona 4, this approach made me care a bit more for them. Seeing a character from the point of view of a protagonist on an 80 hour adventure is one thing, but seeing a character’s inner thoughts? That’s something else and oftentimes felt like they were pouring their hearts out both in the story and in the ring of battle.

The ring of battle is exactly what I would have expected from Arc System Works. Quick paced and tight controls in a 2D fighting style. What did surprise me a bit is how newcomer friendly it felt as unlike Guilty Gear and BlazBlue I wasn’t eliminated in seconds before I could figure out the controls! Instead, every character has two buttons dedicated to their own fighting styles before having another two dedicated to using their Personas in creative manners. Add in the ability to dash, grab, go into a burst mode and while there is plenty to learn in order to wrap all of these elements in together, going through the story is a good place to slowly learn each character’s fighting style before moving over into the pure fighting modes.

To the side of all of the longer, more intricate stories being told between both the Persona 3 and Persona 4 cast, there are the side modes of Arcade, ScoreAttack, GoldenArena and Versus before taking your skills to fight against others online. Arcade mode takes the story events and trims them down into super bite sized before and after banter while actually making you need to win the best of three rounds before moving on with a character of your choice. ScoreAttack is more of a traditional fighting versus mode where you face off against a series of opponents while trying to get high scores. 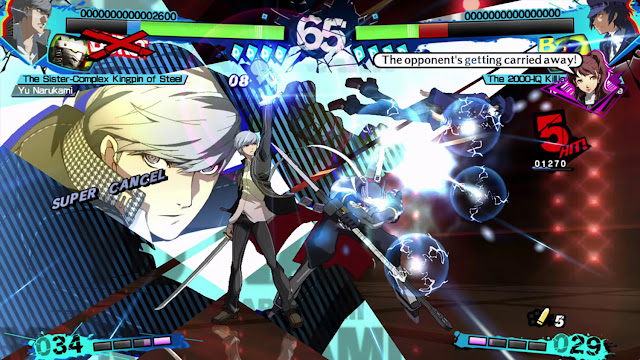 Finally, GoldenArena is a more RPG based arcade mode where you’ll be able to level your chosen character up as you fight through “dungeons”. These won’t be your traditional Persona based dungeons but more a series of fights where you can allocate stats and gain new abilities like you would in a more tradisional Persona based experience. Each of these modes are nice to have if you need a break from the story or really came for the Arc System Works’ combat under a different banner than their flagship series.

If you’re a fan of the Persona series and have played both Persona 3 and Persona 4, then I can’t recommend Persona 4 Arena Ultimax enough. This visual novel-like sequel to both Persona titles was well worth sitting down to see where each cast has gone to after their respective events years and months later. While there is combat in a 2D anime versus arcade fighting style between these story segments, it’s smooth enough to both learn and get into without being defeated repeatedly on the first stage.