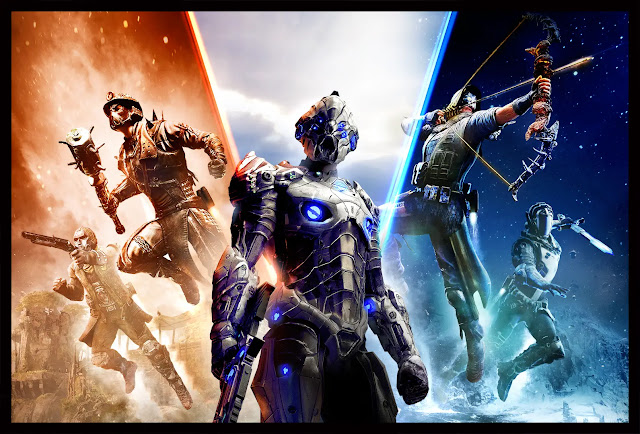 ELEX II by developer Piranha Bytes and publisher THQ Nordic—Sony PlayStation 5 review written by Pierre-Yves with a copy provided by the publisher.

Having been released back in 2017, I had high hopes for Piranha Bytes' post-apocalyptic open world known as ELEX (PS4 Review). Having been hit with a catastrophic meteor decimating their world of Magalan, the survivors would branch off into factions fighting for survival and ideals all while hating one another in the process. Belonging to one of the most powerful factions known as the Alb, our protagonist Jax would soon find himself betrayed and left for dead. Following the outcome of Jax's original journey, he's back again several years later to once again rise up and save the world.

Unfortunately at the time, there were just too many aspects of the original that didn’t come together as well as I had hoped so when I saw that the team were back again with a direct sequel, my hopes were brought back up and you know what? ELEX II, while not perfect, was an enjoyable experience compared to the first which I recently also reloaded just to see how far the sequel would have come. While there are plenty of elements that I think could be improved on, it was worth spending a few more dozen hours on Magalan.

Perhaps one of the larger issues with a direct sequel to an open world experience is how do you go from where you left things off? Your world is built, your story was told in accordance to the choices that you made, but how do you follow that up? ELEX II isn’t the only one in this boat as the same can be said for the recently released Horizon Forbidden West from Guerilla Games. Where things are a bit more complicated here is that Jax was allowed to make choices in who he joined and what he did from that point forward. Well, in a way, the team managed to clean Jax’s slate including alllllllllllllllllll the fun stuff he picked up along the way and the relationships that he left once the credits rolled. 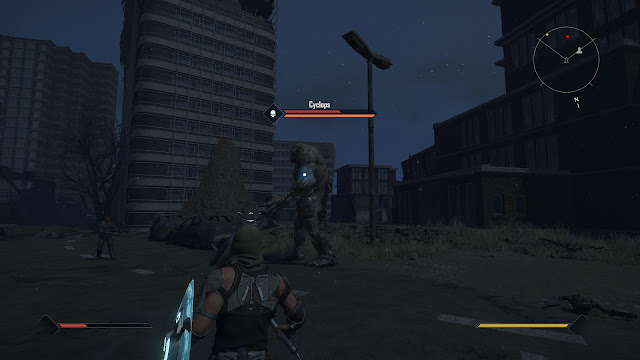 Starting around five years after the events of the first, Jax is living in a run down house out in the middle of nowhere. Returning from a hunt for food, it doesn’t take long for things to literally explode as a new foe descends from the skies and crashes right into Jax’s house blowing it up and leaving nothing much behind other than several scary looking hounds and an iron pipe in his hands. You run, you run fast, but it’s not enough and one of these hounds sinks its teeth into your arm setting your course for ELEX II, trying to save both the world from this new foe as well as yourself from the infection that is now spreading within you.

It’s not a bad premise nor was it a bad way to start off a new story as Jax left it all behind. The fame, the infamy, the weapons, the gear, and over time, the abilities that have been forgotten from not using them. As an aside, as you’ll soon come to see, your past relationships and the decisions the team decided that were made cannon also come back to kind of haunt you in a way. It turns out while you romanced some, the romance didn’t last and it doesn’t look like shared custody of your child is going well either. It’s an interesting twist but it made Jax seem more human this time around. You not only get to see the mistakes he’s made but all depending on how you move forward, you may have the chance to fix some of the wrongs of the past all while under the impending doom from the latest threat.

This is perhaps where I felt a bit of disconnect with ELEX II in the beginning as while the impending doom was right in your face you are soon tasked with gathering allies and rejoining one of the available factions in its current state. The technologically advanced and cold hearted Alb that you originally came from, the Berserkers with their magic, the Clerics with their machines, the Morkons with their odd obsession of death or the Outlaws and their craziness, the threads are all there and you just need to follow them and follow them I did. All of them. I went through most of the quest lines in order to be able to join the Albs, the Berserkers, the Morkons, the Outlaws and the Clerics. I did them all and it kind of muted the sense of impending doom that I thought would potentially carry through like that of the original Dragon Age. 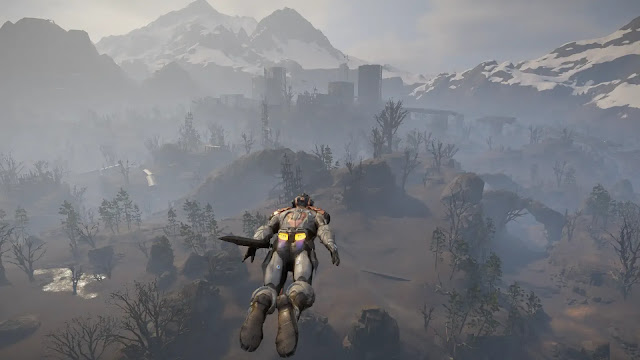 Clocking around a good sixteen hours to finally move out of the first chapter, the Albs chosen, Jax leveled probably far beyond where he should be, Butterknife in hand (worth every minute of its questline), the importance of the main quest came rushing back in as the new threat hit my base, it hit my quest lines and I was no longer as able to ignore it as I had been which finally felt like it kicked the story into gear. Was this ELEX II’s fault? No, but it’s a bit of the risk when there’s a direct storyline and you put it into an open world setting where one main quest leads into fifty side quests and you uncover more and more by following different threads and forgetting what you were up to in the first place.

Moving around this world is as easy as it was in the original ELEX. Wide open areas, roads that lead to locations big and small, the direction that you chose to move in is yours. To help you out, moving between these locations is fairly easy as there are plenty of teleport pads that act as fast travel points which are yours to use freely. The only thing that I wished ELEX II would have had in regards to these points is that they could popup on your compass if you were close enough as there are many times that I ran within ten feet of one on my travels but because of the direction that I was looking I missed it.

While moving between locations or simply exploring while looking for resources, there was a bit more accessibility from the beginning of Jax’s new journey. While enemies could still hit hard enough, this time around you weren’t outright dying from the beginning. In these cases the combat system received a bit of an upgrade with dodging feeling more natural and it didn’t take as long to get your hands on some decent gear in order to survive. Wearing the gear was perhaps a bit of a different story as it required Jax to get a few levels under his belt to raise his stats, but overall it was easy enough to come by these items and weapons would often be dropped by enemies once you’ve finished taking them out. 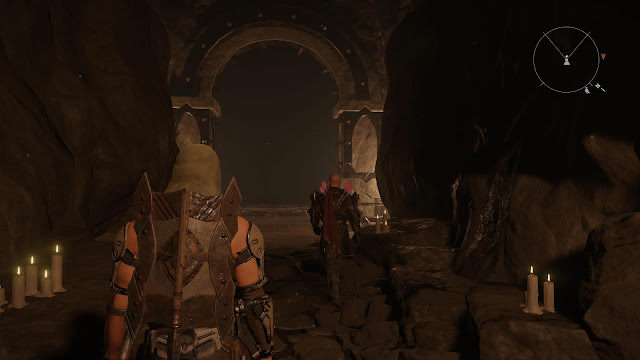 Leveling up in order to equip gear is still perhaps a point of contention that I have with ELEX II from the original ELEX. From the very beginning, you aren’t going to be able to use very much, making you a squishy target that doesn’t actually carry much of a sting. Thankfully though, from nearly the beginning of the journey you’ll be getting access to allies that can help you out and in certain cases basically do all of the work while you gather the experience needed to level up, allocate stat points, and be able to use even some basic swords, axes, clubs, or fancier gear like shotguns and rocket launchers. Once the ball gets rolling though, the adventure is on.

There’s no denying that I enjoyed my time with ELEX II but I also kept thinking that it felt like a title from yesterday. Graphically, on the PS5 the environment looked great and after the initial cutscenes I was left saying wow. Getting a look at Jax, getting a look at the new enemies' four legged variants had me saying alright, alright, RUN! But then as things settled down and you really started to take a look, most character models use about the same frame for more masculine and feminine variations and a lot of the facial features made me think back to the PS3. It’s not bad, but at the same time I felt that the characters and the movement of some of the enemies didn’t match the environment that they were being found in.

In regards to combat, as it will take a long time in order to start learning more special abilities from one of the factions that you’ve joined, you’ll either be swinging single or double handed weapons in combat alongside either hiding behind a shield or dodging like your life depends on it. Because it does. It’s alright, but it’s nothing special or really engaging and often more a means to an end because you need to kill something for a quest, you’re being attacked on the way to a quest, or being attacked because of a quest. You’ll often just be happy to have a single ally as the enemies often tend to come in groups and no one should have to fight that many opponents alone. 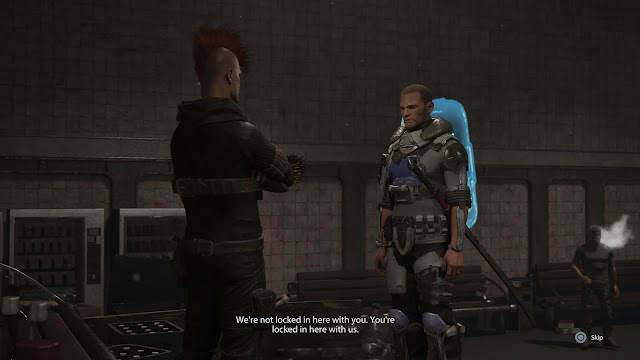 If there’s one element that I really would have liked to replace or at least changed from my journey with ELEX II it would be the very aggravating system that was put into place for dialog. In a way of emulating the real world of things where you can’t just walk up and interrupt someone, you often had to sit and wait for some sideline conversation between two NPCs to be over before you could begin the whole reason that you are there. In some of these cases it could be prevented while waiting a bit before moving onto your next quest objective, but when they are all involved in the quest objective, just let me talk to you and move things along PLEASE.

Overall ELEX II is a decent experience and it fixes some of the issues that I had with the original. While not perfect, the sequel does have an easier level of entry and the return to Magalan was an enjoyable one.