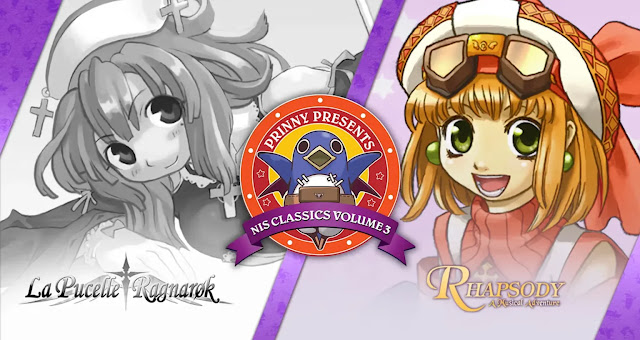 Following up on Nippon Ichi Software and NIS America Inc.'s Prinny Presents NIS Classics Vol 1 and Vol 2, Vol 3 is finally upon us! Taking two much older titles than the ones we’ve seen so far, Rhapsody: A Musical Adventure and La Pucelle: Ragnarok (PSP revamp of Tactics from the PS2), these two SRPGs were both a delight to revisit in a modern day environment.

Note: Please be aware that this review contains some spoilers either in the text or in the screenshots taken during gameplay.

Starting off with the PS1 classic Rhapsody: A Musical Adventure, while it did see a Nintendo DS port a decade later after its initial release, more than a decade after that Rhapsody is making another entrance from stage right but in its original 4:3 format. Starring a small town girl known as Cornet, this adventure is the story of love. Love for the prince that she dreams of one day being with, love of friends and frenemies, and finally? Love of family.

While the story of Rhapsody: A Musical Adventure is never very deep, each of these forms of love is what makes Rhapsody a heartwarming story. It's cute and it's entertaining which is a good thing as there are some of the gameplay mechanics that did not age as well over the decades. Having originally found an almost sweet spot in its playstyle, Rhapsody is an SRPG but with JRPG elements when it comes to exploring the world and finding out clues of where to go next. Town interfaces are small but have people to talk to and depending on actions completed they can potentially offer you new leads on what to do next. 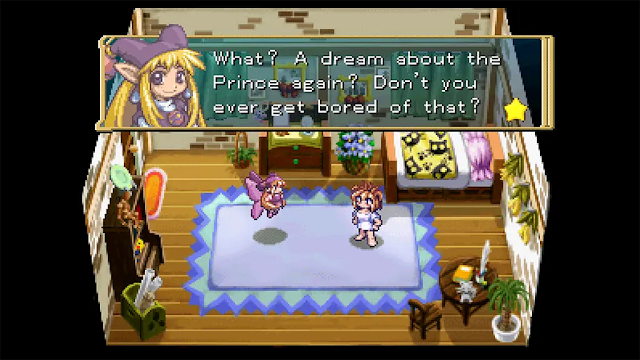 This part works great and it allows for a more natural flow and reason to revisit locations as you progress through the adventure. One of the parts of Rhapsody that hasn't aged as well however are the dungeons that you'll be exploring in order to process through this adventure. Forgetting just how complicated it could be at times unless you have a stellar memory, I quickly found myself with a pad and paper to start drawing my way through as without it? It could take you some time to figure it out. It could also easily break your gameplay experience by your party being severely over-leveled as you try to figure your way through these dungeons.

The dungeons themselves are built in bland small cube-like rooms with passages potentially opening up to the north, east, south or west sides. There's no mini map. There's no map in your menu. There's nothing but remembering what passageways you've taken and which floor you are currently exploring. Because of this, and the at times crazy amount of random encounters, it's really easy to lose your sense of direction as you could forget which way you were going. I highly recommend making sure you have a pad of paper, a pen and / or pencil nearby because for some of these dungeons? You'll be venturing in a few times over the course of the adventure and no one wants to get lost a second or third time.

So it's a good thing that the story is cute enough to want to know the end of and that the dialog is fairly entertaining especially in the banter with Cornet's enemies and frenemies. Another good point for older gamers is that some of the one liners from the original localization are totally from the 90s making for a double nostalgia trip! If that's not enough for you however then there's also a decent combat system to keep you going which meshes in a turned based JRPG with the grid like combat of an SRPG. 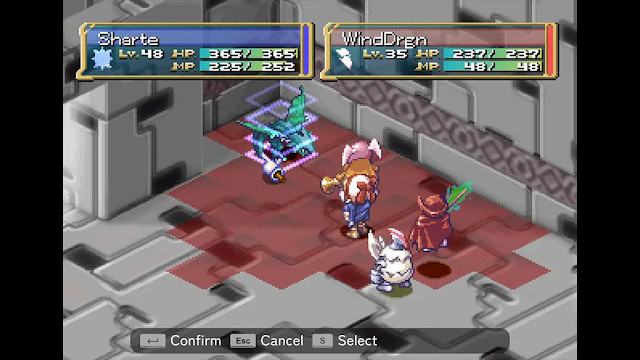 The combat overall is fun. Using unit speeds as a basis for turn order, battle will play out in turns with the fastest characters going first and the slowest going last. Each character on the field can either move, move and attack, attack and move (which is something new titles could remember to implement) or simply attack. Standard attacks tend to only target one square in front of the character but special attacks such as magical blasts can cover a wider range. They do less damage than their single target variants, but two of those, especially if you’ve overleveled, should be enough to clear the field and get your experience points for more levels! Again, overleveling could break the more strategic nature that you’re supposed to experience.

Aside from the normal and magical attacks, there’s another neat combat feature to Rhapsody: A Musical Adventure which ties into the musical adventure. Cornet uses a musical horn as her combat weapon but it’s also with this horn that she can command puppets to help her in battle. So it only makes sense that while going into battle with her puppets that she’s able to also use it to inspire them to do more damage which is always a welcome bonus. Not stopping there however, using Cornet’s horn will also fill up a musical gauge to perform large scale attacks such as dropping massive flans or pancakes on the enemies which can easily remove a boss’ minions!

Outside of battle the musical theme often continues with actual songs making you think you were playing a Disney Movie. Cornet sings, sometimes even in a duet and as une pièce de resistance, even Marjoly (main antagonist) gets their own musical number! These are all overall fun to watch and to listen to as they each have a good production value and fit the overall themes of love, friendship, and in the case of Marjoly? Lack of all the above as some people simply get no respect! It’s tough being the boss some days… 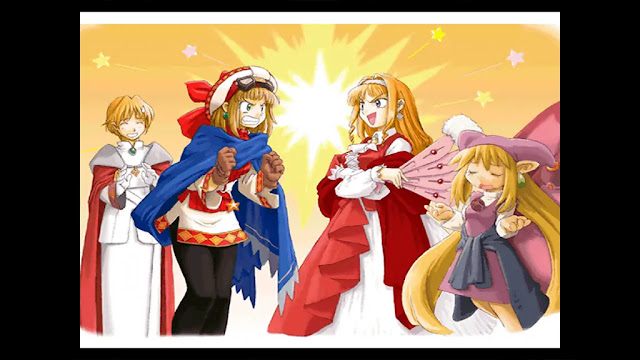 Otherwise, while it can feel a bit dated in a few areas, I’m really happy that Nippon Ichi Software and NISA brought Rhapsody: A Musical Adventure back. I was also happy that NIS and NISA decided to bring the PS1 version of the experience to the Prinny Presents NIS Classics Vol 3 as the DS version did away with the SRPG elements for a more traditional JRPG combat experience. Also? Trying to find a PS1 copy is damn near impossible unless you REALLY want to spend a small fortune and the Nintendo DS version just didn’t have the same magic to it.

So overall, Prinny Presents NIS Classics Vol 3: Rhapsody: A Musical Adventure, while perhaps a little dated from today’s standards, is worth picking up. If you’ve never had the chance to play it, with a charming story, decent combat system and some fun musical numbers, the adventure should net you a solid twelve to sixteen hours and should leave you with a smile on your face as the credits come to a close.