on August 04, 2022
XEL by developer Tiny Roar and publisher Assemble Entertainment—PC (Steam) review written by Richard with a copy provided by the publisher. 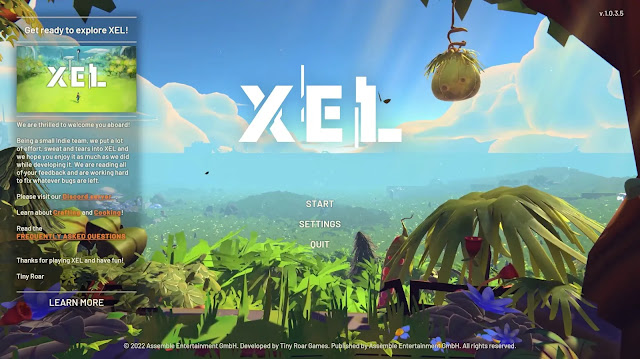 What would happen if you take Breath of the Wild and make it a little closer to the older Zelda titles? Well, you'd get something close to XEL. A more futuristic take on a Zelda with its own twists thrown in. XEL would be a rather nice title in the Zelda-like series if it weren't overshadowed by some rather heavy technical issues.

XEL tells the tale of a young girl who crashes her spaceship on a planet, giving herself amnesia. Pretty soon she discovers that angry robots have overrun the space vessel, not a planet, and she decides to help try and fix things, because why not? Along the way she discovers a lot of things that get little to no resolution or relevance, and promptly forgets about major plot points she just learned five minutes prior, so you don't need to worry too much about the storyline. Actually, I'm going to throw out an issue I had right away which involves the storyline, or lack thereof, I suppose.

Basically, I had very little knowledge of what was actually going on. I mean, I'm sure I was supposed to learn about it at some point, maybe? But like, there were a lot of times where I would return to town between main mission objectives and the characters would be like "remember this thing we told you about?" and I would be like "yeah, no, you didn't". Heck, the transition to the final cutscene before the point of no return for the final boss talked about some stuff I had no idea about, but apparently the characters did. Not to mention the main character, who gets named Reid by the way, completely forgets about an important piece of information she just found earlier which would help her out against the bad guy.

But nah, we don't need to worry about that. 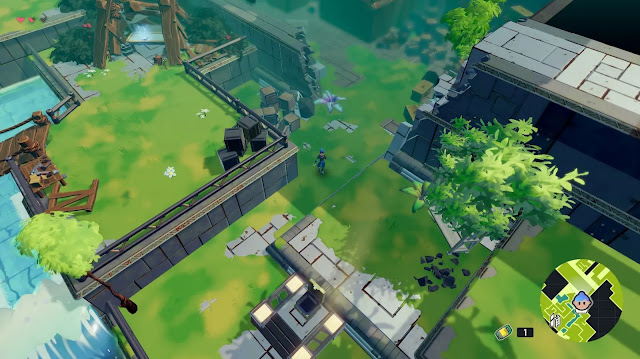 Gameplay for XEL has a pretty good basis. You have a 3D isometric world to explore where you can hack at enemies, use a shield to block, acquire new weapons and tools, such as a shock trap and "not-a-hookshot". There are plenty of chests to find and loot, and varied areas to explore with puzzles to solve to get at chests or items in the main areas for story progression. As per Breath of the Wild rules, you have a stamina wheel that depletes when you roll or when you get hit while blocking, and will regenerate slowly. You can also "craft" food at campfires, making stat boosting or life healing items you can use from the menu whenever needed.

Combat is, for the most part, surprisingly smooth. You attack and guard when you need to, making sure to keep an eye on your stamina. You can roll away from enemies, as well as do side and back steps if you're targeting an enemy. You can equip two tools as well, which can be either utility or potential damage dealing weapons. Combat with normal enemies, and even some of the larger miniboss type enemies, is generally pretty good. If you have a bunch of both melee and ranged units, it can be a little frustrating, but that's more due to number of enemies, rather than any inherent gameplay issues. Some of the bosses on the other hand, hoo boy. While I understand the devs are still putting patches out to resolve some of the issues, some are just sketchy gameplay design if I'm being honest. Let's just say it's really hard to get a swing off when icicles are raining down on you and you have no control over where they appear.

Let's move on to the audio and visual department. Visually, characters are pretty alright, and environments are pretty nice looking, provided you ignore the grass. Where XEL excels at however is in the audio department. First off, I'd like to note that there is a ton of voice acting that went into XEL, and all of it is at least decent, so props to the devs there. Secondly, the BGM is really nice, and while you may quickly stop noticing due to a number of reasons, the sound quality is actually quite good, for both music and sound effects. Dialogue would occasionally skip forward sometimes though, and there were a few jarring transitions between scenes, so that could probably be smoothed out somewhat. 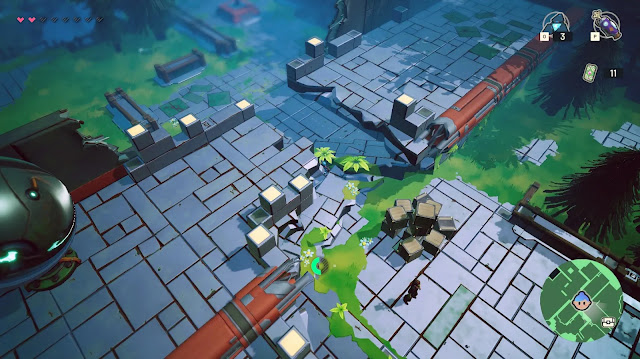 So, if what I just mentioned was all there was, I would say XEL is decent, but could do with some improvement here and there. Unfortunately, the game is, largely, incredibly bug ridden. I'll list off only what I've personally seen, and while patches are being released to address some of these issues, at least from what I've seen in patch notes, I still experienced these issues just before writing this review, so take that into consideration.

First up, NPCs roaming around tend to slide instead of walk. I know it's a minor issue in the grand scheme of things, but it is very clearly noticeable. Best part is that sliding isn't restricted just to NPCs. Occasionally I would find Reid also sliding around, much to my chagrin, especially if I opened the menu after or while running. Next thing I know I'm halfway across the map falling into a pit. Which also presents a similar problem, because I would walk at a ledge to jump off it, miss and fall, only to be respawned mid-walk right on the edge, causing me to immediately jump. This was most apparent in the final boss fight where you have to jump across some platforms at one point. It took me about 12 attempts to get off the final platform, because I would either slide off the platform without jumping, another chronic and serious issue, or I would respawn almost mid jump, which was exceedingly frustrating.

Don't go anywhere, because there's a lot more. During the game you will discover segments where you can travel into the past in localized areas, usually in order to get across dilapidated bridges, or to solve puzzles by changing something in the past to help in the future. Well, there is one of these puzzles fairly early on after you discover the ability, where you need to push a block onto a grate. Well, I accidentally pushed the block out of the "time zone", which meant I could no longer solve the puzzle. 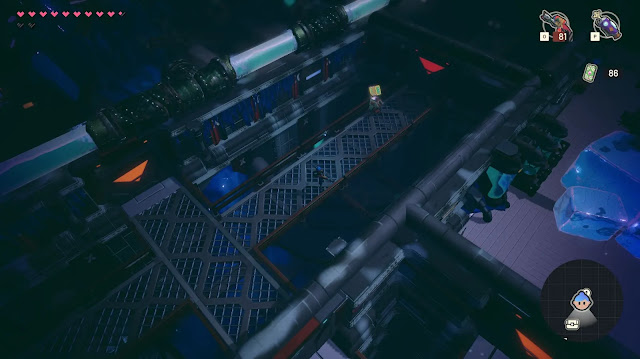 This is also where I first started really noticing that the game has some issues loading in assets. Occasionally textures and objects would take a long time to load in, sometimes not at all. I fell through the floor here because a segment of the floor just never loaded in. Something similar happened toward the end of the game for me as well, where I loaded my game, went to enter a door and ended up falling through the world and getting a game over for it. XEL may be pretty fun, but it is also one of the games I've played that I've managed to softlock the most. Jumping out of bounds, getting stuck in plants, losing blocks you need to push, glitching into areas you aren't supposed to be in yet, suddenly just being unable to move are all of the ways I managed to cause issues where I needed to reboot the game.

On a lighter note, map recognition is really wonky. What I mean is that you will occasionally get notices that you are entering different areas, despite not actually entering them. Additionally, there are a few areas where the minimap doesn't update properly, either showing a different area or not at all. Another comment on the map is that some chests are displayed, not all though, and sometimes they show an opened chest icon. Sometimes. This also appears to reset to a closed icon if you get too far away or restart the game.

Let's talk a bit about the subweapons/tools. Each is unique and has its own uses, but the amount of info you get about them are very little. As an example, the sonic weapon needs to be used at least a short, if not medium, distance away otherwise it doesn't really work. That one took me a while to figure out. Also, the targeting for the webshot is a little awkward and needs some finagling, but is mostly alright. What makes this a little more annoying is the camera orientation. It's sometimes a little too far away, and you can move around to have the camera show behind walls where nothing is there. The camera angle also means that more often than not you will target the nearest webshot location, often the one you just got to, and not the one you want to get to. 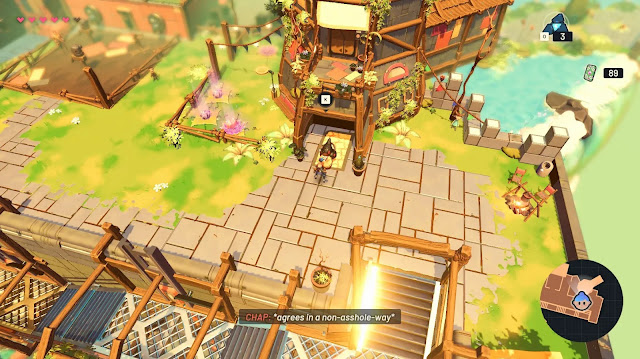 The last issue I have has to do with interacting with things, particularly chests. A lot of the times you'll walk up to a chest, try and interact with it, only to have to walk back and forth a few times before you can actually interact with the thing. Other than the glitches, I would have liked to see a run/sprint and for the fast travel function to be unlocked sooner.

All in all, I actually had a fair amount of fun. The crafting system isn't too complicated but is still a nice way to upgrade gear and make items for stat buffs and regaining health. The stages and puzzles are pretty interesting and they all have different themes to them. The voice acting and music is solid, and combat is surprisingly fluid for the most part.

Ultimately, XEL currently has way too many issues for me to seriously consider suggesting it, which is a shame considering the promise it shows. While updates are being made, at the moment it can be an absolute struggle to get through, and even when it isn't, the little things start wearing on you pretty fast. I highly suggest to wait at least a month for some fixes to the issues before you consider picking up XEL.

I really hope the issues get resolved and the developers continue making games, because I'd really like to see more refined titles from them.