on July 15, 2015
Dinosaurs. LEGOs. Those two things alone should spark the imagination of almost any kid - I certainly recall them coming together frequently in my childhood, and they seem like a perfect pairing for a video game as well. That the recent Jurassic World movie was such a huge success should only reinforce the likelihood that the game is well-received. The good news is, the video game holds up quite well as a creative, kid-friendly take on the movie. 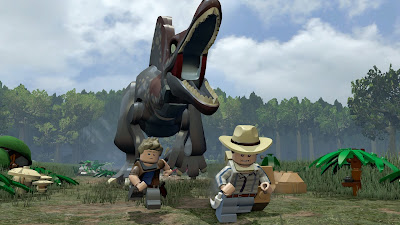 If there was a complaint from critics about the Jurassic World movie, it was some nitpicking over some of the finer points in the storyline. This did not seem to bother audience goers much as they flocked to see it in theaters and seemed to enjoy it. LEGO Jurassic World should appeal on a similar front. You do not get lost in any sort of story minutia here, but you do get to relive many of the bigger scenes from the movie, all against a background of bricks and amusing characters.

Like the LEGO Hobbit game, this one actually pulls from story lines found in Jurassic Park, The Lost World and Park III as well as Jurassic World. This gives gamers a plethora of content to work through, with lots of brick-based environments to sort through, plenty of characters to play and of course, lots of adorably cute dinosaurs that make up the high points in the game. 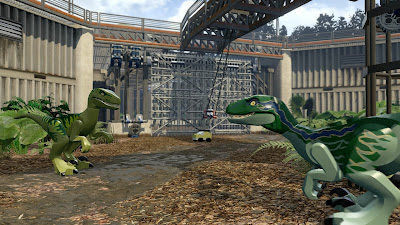 One of the best design choices in this game is the ability to let players take control of the dinosaurs and wreck havoc with them. The dinosaurs plod about in somewhat difficult-to-control fashion at times, but they are still a great deal of fun. This was a great decision because the human characters really lack for variation. This is not like a Hobbit game where you might have dwarves, archers and magic users that have different skills, or the Marvel game where the superheroes have lots of unique abilities. Certainly some humans in this can do specific things better than others, but it was a smart design choice to allow for non-human characters to control.

As always, there is a sort of LEGO brand of humor at play here that works so well with the bricks and the story content. I remember being impressed years ago when I first played the Star Wars titles in LEGO form - I came away thoroughly impressed with how expressive the silent characters could be, and how funny the end results were. Fast forward to where the LEGO games are at now, and the characters are far more expressive than ever and this allows that trademark humor to really shine. 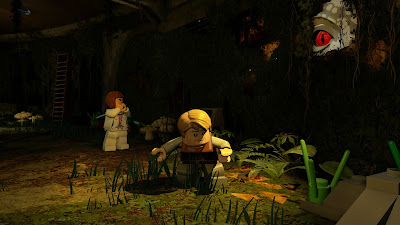 Of course there are a ton of unlockables as you play, which gives the game a good deal of replay value. This is not the longest of games - each of the four chapters takes a little less than two hours to complete, so you are only spending about seven or eight hours on the entirety of the campaign. The unclockable content gives you a great excuse to go back and try some of your favorite levels again. The desire to do so is helped by great level design, charming visuals and a sound track that really soars when it needs to. To me LEGO has always been synonymous with imagination, and this is a game where it is easy for the imagination to get swept away in the fun.

There are a few bugs here and there, and I do wish the dinosaurs controlled a bit better at times, but all in all LEGO Jurassic World is arguably the best installment in the LEGO series in the last couple of years. It will appeal to a large audience, it gives you a lot to do and... oh yeah, there are dinosaurs. My inner child absolutely approves of that.