on July 09, 2015
I really wanted to like Wander because there were some really cool ideas here that I wanted to get behind. However, the experience really does not evolve very much, feeling very much the same after ten hours as it did in the first hour, which was not terribly different from my first fifteen minutes. While I think Wander's heart is in the right place, its execution leaves a lot to be desired. 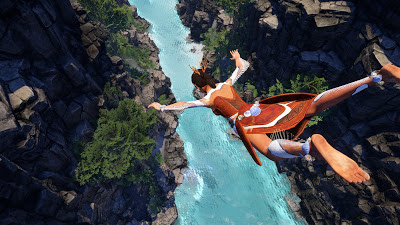 The idea behind Wander is simple, yet one that was obviously going to be challenging to implement properly. By definition, Wander is an MMO because you share a massive online world with other players who are experiencing it in much the same fashion as you do. There is no combat, no leveling system and the only real sense of progression comes through exploration and the unlocking of a new creature that you can wander about with.

When you begin the game, you are a large mobile tree (think treant from fantasy movies and novels) who has no memories to speak of. You move forward, seeing the world through the eyes of this tree, eventually hearing a beautiful melody that entices you to draw closer, unlocking a new form you may then undertake so you can continue your journey, which will lead you through the air, water and across a variety of terrains.

The interplay with other players is expressed through the visual language of Rozhda. There is no text, there is no option for using your microphone. You simply continue to travel the land, occasionally finding some markings that you then learn. These markings allow you to communicate through sign language. The idea behind this communication is neat, as you use the touchpad on the PlayStation 4 controller to 'draw' your signs out. Unfortunately the system is incredibly precise, and it seems like I fail far more often than not. Games do need some challenges or they seldom provide enough meat to keep people entertained, but a fickle interface is probably not the ideal place to create said challenge. 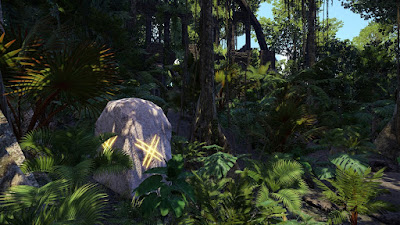 As a result of this lack of communication, you do see other people milling about, but there is almost no interaction. The opportunity is there, but with reliance on such a haphazard mechanic, other players really amount to little more than wandering, silent NPCs. You know there is someone driving them, but they provide little more interaction than mobiles from MUDs of years past. They feel lifeless and no one seemed willing to make an effort to really communicate with me during my time playing the game.

I am all for exploration as a primary goal. I used to spend ridiculous amounts of time exploring landscapes in World of Warcraft. I used to swim to the most remote locations (often circling large mountains while hoping to find a piece of land I could eventually clamber back onto), fly my griffons to the far corners of the map and try to scale surfaces I was likely not meant to scale. One of my favorite memories was wandering through Duskwood, making my way through the mountain range and discovering that slice of elvish land with the mysterious portal. I never knew what it was for, and I kept coming back time and again until I one day discovered a bunch of people finding a giant dragon. After that I continually revisited the location, even when I played again last year for the first time in years (sadly I did not realize that the dragons no longer appear until several dozen empty trips).

Why am I explaining all of this? Just to help explain where I am coming from with my next statement - and that is while Wander wants you to explore, it seldom gives you a compelling reason to do so. I understand that the game does not have combat, there are no enemies and there is something to be said for a tranquil gaming experience. However, the hooks are so minimal that there is almost no real reason to partake of this particular journey. There is really no compelling content to drive your wanderlust forward. 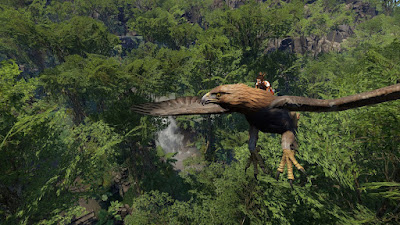 The graphics are built upon a solid engine, but much like the game's overall execution, the visuals do not hold up to the eyeball test after a while. You start to notice wonky shadowing, lighting effects that underwhelm, flat textures and frankly the environment itself can sometimes get wonky (I got hung up on things a handful of times). When you stand still and look around, the world of Wander has a nice enough aesthetic, almost like a painting. However when asked to animate and move about, some of the flaws begin to show through.

I feel graphics are an important part of video games, but they are seldom critical to the title's success if the other elements come together. The problem for Wander is that there is so little else to sink your teeth into. The narrative is subtle, and maybe to some degree it is simply lost on me or I did not appreciate it properly, but I just never really found it to be overly compelling. As a result, the visuals play a more important role in your exploration, and they simply do not hold up as well as I would have liked.


The soundtrack is a minimalist thing, with pleasant, soothing melodies that fit perfectly with want Wander is attempting to do. The ambient sound is also quite subtle, with the rustling of leaves like a chorus of whispers when the breeze drifts by. The sound of nearby sources of water, trickling softly help to prop the tranquil, outdoors vibe that Wander is attempting to sell. All in all the audio design does its job, but it feels like the lone component that actually fully succeeds in what it is trying to do.

There are a lot of 'walking' games out there. Most of them tell a very specific kind of narrative (often one steeped in horror, but not always). Wander is a much more open experience and I love seeing developers taking chances and attempting to do something unique. On that front Wander certainly seems to know what it wants to be. The problem at the end of the day is that Wander really is just not very compelling. Wander was always going to struggle to find a respectable market. This is a niche title that had limited appeal to begin with, but even that small percentage of gamers such as myself willing to give this a try will likely come away disappointed. The gameplay and narrative are incredibly thin, and technical problems break the immersion that a title like this absolutely has to nail in order to succeed. As a result Wander makes for a poor experience and an even worse game.