on February 19, 2015
The Red Dragon Inn games are all about what happens after the day's or week's adventures have played out. Many a good RPG starts in a tavern, but what about those stories that take place at the tavern when all of the adventuring is said and done? Here a group of friends get together to win one coin from each other while drinking one another under the table. Red Dragon Inn 4 is an expansion upon the earlier games, but it can stand alone or be played in concert with them (creating some very large gatherings of friends). The idea behind it is less about being in an actual inn, and in fact sailing and drinking with your crew. This is one of those games that plays better with a bigger group, with cards that can impact single players but there are also plenty of opportunities in the deck to impact the group as a whole.

The core mechanics revolve around three things. Each player starts with an equal share of coins. If their coins run out, so does the player's time at the table. Additionally, each player has a score chart with two values on it. One is fortitude, the other is drunkenness. Fortitude starts at the max value of twenty, inebriation starts at a zero and should those to values ever meet up - the player is passed out and done for for the evening. 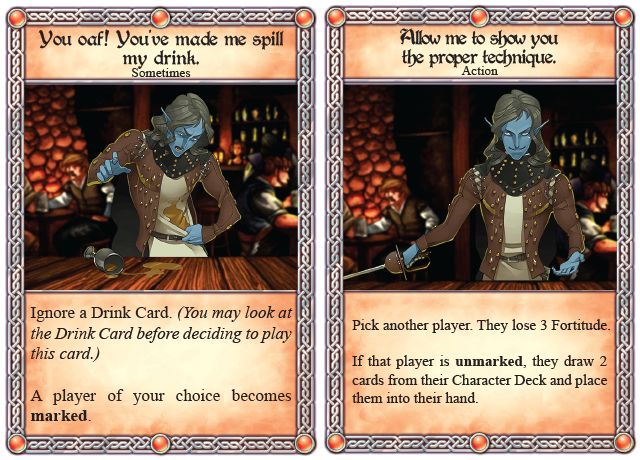 Each player chooses a character, ranging from Captain Whitehawk to First Mate Remy and more. Each character has their own deck, and while all of the decks have some similar cards running through them, there are themes permeating each of the decks as well. For example, Remy deals marks to other players. His base cards might not be as effective on their own, but used on a marked player they are now better than average. Bryn the Boatswain is a powerfully built female who tries to win by out drinking everyone else. She hits you through that fortitude while managing her own drunkenness with aplomb. Tara the Navigator or Captain Whitehawk have cards that hit your purse harder than your belly.

The other deck players use is a drink deck. This is more of a community deck that everyone draws from. Every round consists of restocking the player's hand, then playing an action card (usually it starts a round of gambling which can be used to earn money, or pinpoints another player to lose fortitude or increase inebriation). After that you draw a drinking card to put on another player's character mat, and then lastly you yourself drink by flipping over the card on your own mat.

The drinking cards can range from harmless (a cup of coffee) to potent (a strong liquor that raises your alcohol level by three) and everything in between. There are also drinking event cards or cards that have chasers (these require that you draw additional cards - which can lead to someone spiraling out of control very quickly). The game ends when one player is left standing. 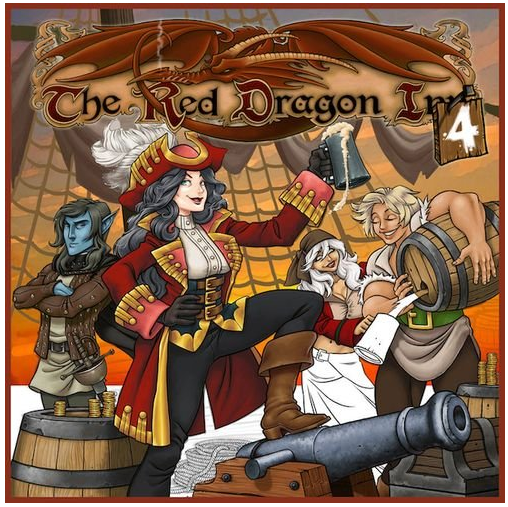 Red Dragon Inn 4 qualifies as one of the easiest games to pick up and play in some time. The rules are quite clear and simple game mechanics that are a nice mix of luck and strategy. There is also a variant of the game called Sea Events that can be played once you are familiar with the base game. This is a case where the inn's mechanics are taken to the high seas, and things can happen while you are out there. These events can add some nice surprises to the game that can twist up any strategy in a hurry.

Red Dragon Inn 4 plays at more of an intermediate speed. Most of the decision making revolves around what cards to play when trying to win a game of gambling, or which player to target or when to use a counter card. That means a good deal of reading. The cards certainly look nice, but they could stand to have slightly larger text - especially if the group is playing in a slightly darker room (or has perhaps had a few real life drinks to go with the theme of this game). Three player games ranged from twenty to forty minutes, while four player games sometimes pushed to just under an hour.

The idea that this expansion stands alone or can be played with the other sets is awesome, especially if you want to play with a large group of friends. Red Dragon Inn is a game that encourages lots of interaction between the players, making it a fairly rowdy time. The strategy elements are there, but more limited than other games, making it quick and easy to learn, but perhaps not as deep or tactical as some players might prefer. All in all, Red Dragon Inn 4 is a good time for large groups.