on February 17, 2015
Nintendo is getting known for their handheld hardware refreshes over the last several years. In fact, this latest iteration of the DS rather reminds me of the Game Boy Advance or Color. It is essentially the same system, it has some backwards compatibility, but it has promise for future expansion as well. Now that I have had several days to work with the system, I am ready to talk about my experiences a bit more. 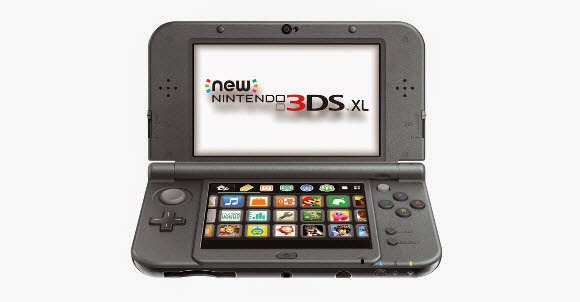 The most notable thing for me is the size difference bumping up from the regular 3DS to this New XL. My wife picked me up my prior 3DS for Christmas a few years ago, and it is substantially smaller than the XL, which suits me fine. I have large hands, and am looking forward to the inevitable Nerf armor that PDP makes, because it will make the handheld a bit bigger, and for me at least, a bit more comfortable to hold onto. That being said, I already like the profile of the New 3DS as well as the much improved upper screen. My son was a little worried that the new model would not fit in his jean pockets, but it does - if only barely. He has a tendency to tote his standard sized 3DS around in his pocket, so the portability of the new one was a momentary but unnecessary concern.

Of course the screen size is better - but it is also improved in general. The quality just seems better. It is certainly brighter than my prior 3DS. Also, better design means the screen is less likely to get scratched up. One thing my son and I both noticed with our prior 3DS models is that the lower screen could sometimes scratch the upper one when the unit was closed. There are tiny rubberized stoppers on the top half of the clam shell design to prevent that contact between the screens now. It is a small attention to detail, but an appreciated one all the same.

Probably the most notable design change comes in the form of the new interface options. Additional triggers along the back and a second stick in the form of a laptop-like nub on the upper right side of the bottom half of the unit give developers something more to work with. The triggers are not seeing much actual use yet - scrolling more quickly back and forth in the menu screen is about it, but the option is there going forward. Of far greater importance is the second control stick. Monster Hunter really makes great use of this, and for those who had not sprung for the additional circle bad attachment in the past, this is a great addition that feels like it should have been a part of the DS all along.

I spent some time with Monster Hunter and found that the game was playable without this stick to help swing the camera about, but the experience was simply not as good. It was harder to hit targets and it was far easier to get nailed by enemies. These deaths often felt cheap, because the workaround for playing the game without the second stick is functional, but hardly ideal. Camera manipulation these days all but relies on an input like this, and games on the New 3DS will be better for having it there.

There are some other design changes that are not any better or worse really, so much as different. The stylus, cartridge location and some of the buttons get new homes. Probably the most unusual change is getting access to the additional memory card. The New 3DS comes with a 4 GB card, but I immediately swapped it out for a new 32 GB one (I was running a 16 GB previously on my 3DS, so I already knew I would need the extra real estate). The switch to micro SD card was a somewhat peculiar one, and replacing the card is a bit more of a chore here than in the prior units. Perhaps they wanted to secure it better to keep people from accidentally ejecting the memory card? I am simply speculating there, since I have never heard of anyone experiencing that issue, but regardless now you have to turn the unit over and unscrew the bottom plate with a size 0 Phillips screwdriver.

Once that was all said and done, it was time to transfer data. This is a somewhat arduous process as there are two avenues available to you. One is to transfer the data via download/upload to a computer. This process is faster, but does rely on having the ability to read the two differently sized cards. There is also a wireless option, which was the route I went, simply because I heard it was slow and I wanted to test it and just see how slow it was. With about ten gigabytes of data, the overall process took me about four and a half hours to complete.

Essentially the unit first has to transfer your licenses and then has to transfer your save data. There is an option to only port over your data and not everything (including the games themselves). You can then go into the e-Shop and re-download your prior purchases. I just opted to get it all done in one fell swoop. From there everything including my folder layout and theme options was in place. A slow process, but a fairly easy one.

The processing power is improved, and it certainly seems to help titles move faster, and in general the games just look better. Some games seem to leverage this better than others. Going back to Monster Hunter 4 Ultimate, the second control stick was the biggest improvement, but visually the framerate and details just seemed better. Perhaps some of that is attributed to the bigger, brighter screen, but I suspect some of that is also due to the processor.

The last highly touted feature is the new face tracking. This gets demonstrated by the system when you first initialize everything, but it holds up pretty well while playing the games too. Extreme angles are a bit ridiculous of course, but I do enjoy the fact that I no longer have to stare straight at the screen at a specific distance. Most of my family does not like the 3D effect on these systems. My son however, has been making good use of it again on this system, due to the more forgiving visual parameters. Others like my wife and youngest daughter still prefer to play it with a flat screen (which was why we snagged a 2DS for my youngest daughter over the holidays). 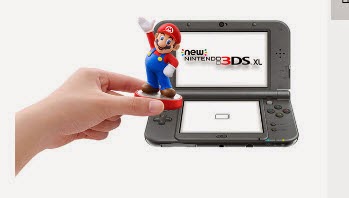 For those who have a 3DS (especially an XL), the question of whether or not to upgrade is a fair one. The only upcoming game that requires the new system will be Xenoblade Chronicles (at least over the next couple of months. I suspect that may change over the next year). Certainly the second stick is a big help, but most games currently released do not make any use out of it. The face tracking is only helpful for those who liked the 3D effect in the first place. The Amiibo support is certainly nice, but not everyone collects these.

There are a handful of other odd choices that come from this new release, beyond the difficult to access memory, slow transfers and the move to mini SD. Why Nintendo did not ship this with a charger is a bit of a mystery to me. I give credit to Gamestop, who was very quick to point this out to us when my son pre-ordered his Monster Hunter edition about a month ago (I settled for picking up a Black one on release day). Nintendo says they are saving the consumer money, but considering they sell these chargers for $5 refurbished or $10 new on their website, I doubt they would have raised the price to $205 or $210. $199 is a much more attractive price point psychologically so in the end they are really just saving themselves money. This is doubly annoying because you have to plan ahead for this issue. If you plan to use a 3rd party charger, you void the warranty. Stores like Gamestop and Best Buy don't sell the Nintendo brand chargers new - you have to order them from Nintendo's online store, which can take up to a week. Also launching it on the same day as two big titles (Zelda and Monster Hunter) makes sense, but launching it with no New 3DS only titles like Xenoblade means that people can wait before picking one up. It feels like an oddly timed launch that would have made just a bit more sense with another compelling title or two that needed the New 3DS to work.

The question of value is going to be different for everyone. As someone who found Monster Hunter 4 Ultimate a far better experience on the new system, as someone who is greatly anticipating Xenoblade Chronicles (having missed it on the Wii), as someone with several Amiibos, as someone who likes the 3D effect and as someone who had a smaller screen and likes the larger profile found here, the New Nintendo 3DS actually has a great deal of value. This is undoubtedly Nintendo's best version of the DS yet, but it might not be compelling enough for everyone to buy just yet.