on February 17, 2015
Ah... the Dungeon Master's screen. A DM's bastion of privacy when rolling the dice or referencing maps. I have seen and owned a lot of different ones over the years - including having fashioned several of my own as well. With the handful of new Dungeons & Dragons materials released over the last year, it was only a matter of time until we received a new DM screen as well.

The DM screen serves three basic functions. It needs to have relevant data on the Dungeon Master's side to serve as a quick reference, it needs to be tall and wide enough to obscure the eyes of overly curious players and lastly it has to look the part. Yes, that is a very cosmetic item and the least important of the three, but I pretty DM screen does in fact help to set the mood, even if just a little bit. I actually had several over the years and would often pick mine based on the campaign or type of adventure I had planned as much for what the players would be staring at as the statistics on my side of the veil.

This particular screen is very attractive, with lots and oranges as a mighty dragon adorns the front right side while various characters populate the left side. It is very much in-line with the artwork that has been featured on the covers of the recent books and starter sets. With a wider landscape design that folds in three different places, and not just two, this screen can wall off a fairly substantial bit of real estate at the end of the table. Additionally the build quality of the screen is solid and durable. There might be some concerns about the height, and that is a matter of preference I suppose. It is low enough that I can reach over it easily enough when I need to. I have had three panel screens before that were more of a portrait view and I had a tendency to reach around the sides of those as needed. Unless your players are practically in your lap, the roughly eleven inches of height should be enough to discourage roaming eyeballs while giving you plenty of space to operate.

The information on the back is probably the most divisive matter when a DM is choosing their screen. Almost every DM I know modifies the information available in some form or another to suit their needs. I prefer to keep my screens in nice condition, so I tend to have sticky notes draped from the top or a couple of index cards propped up on the inside in places to keep relevant information at my fingertips that the screen itself might not provide. 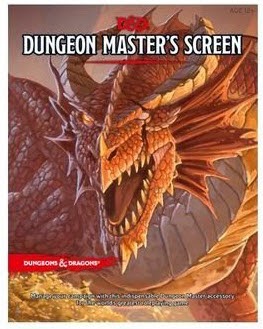 This particular screen seems more focused on the interactions aspect of the game. There are references to combat, skill checks and how to generate an NPC very quickly, but the combat definitely receives the short shrift here as those looking for classic armor class types of tables commonly found in older screens such as Second Edition will come away disappointed. Obviously never every stat is going to fit on the back and while some DMs prefer to have the combat heavy stats, I actually am quite good with the tables focused on character interactions. Perhaps that is due to my style of play where I tend to know combat rules very well by memory and find moments of creative inspiration more useful, but by and large I like the numbers presented.

Aside from the content, the data on the back should be easy to read. This is usually managed in two parts - first by the text size and font as well as how it is organized. This screen handles both aspects quite well. As with any new screen, there is a brief adjustment period as the DM familiarizes themselves with what is printed on the back, but I was quite comfortable with mine well before my first session with it drew to a close.

This latest DM screen is well constructed and very attractive. However, its actual form factor and content will be a matter of preference for DMs. This is not my absolute favorite ever, but I generally prefer a landscape to portrait style screen and get more out of tables that provide interactive inspiration than loads of easy-to-memorize combat tables. I found this particular Dungeon Master's Screen to be a very solid offering.