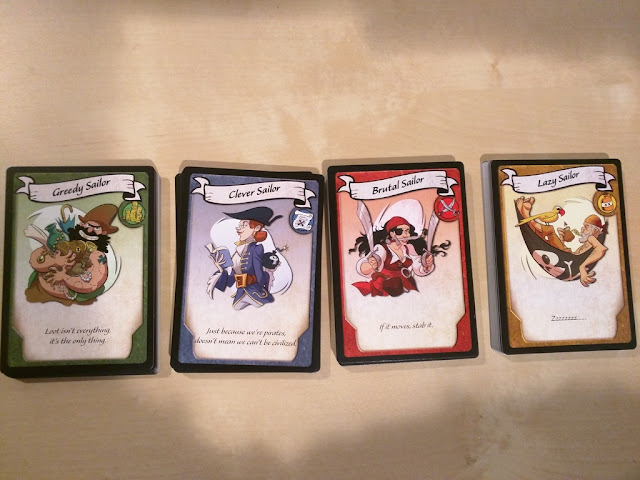 Pirate Loot might sound like a bit of a generic name, but it has a pretty solid pedigree behind it. Jason Bulmahn of Pathfinder fame works with Scott Kurtz and Dylan Maconis as they provide their art to this quick and easy to learn base for two to four players.

Pirate Loot deserves credit for being one of the more accessible games out there. The game itself is easy to learn, and play sessions are relatively short. This is what often gets referred to as a "take that" style of game where the objective is to gather the most loot through whatever means possible. 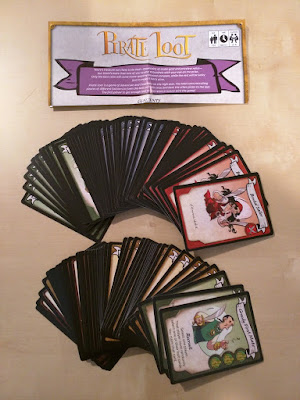 Aesthetically pleasing, the sturdy two-part box holds the cards neatly, and the cards themselves are of average stock and thickness. They should hold up just fine to lots of play sessions, with no visible wear on the edges during shuffling and dealing. The cards themselves have a pleasing art style that is right in line with the somewhat goofy theme of the game. The package comes with 108 cards, so that can help with the variety from one session to the next.

Pirates? Goofy? How so. Well, there are four factions to be had here. Brutal, clever and greedy certainly fit the bill. Lazy? Well, it's the fourth one, and it actually is well-balanced against the others, just more amusing in my opinion.

Every turn is built around having a pirate you can play, including leveraging the pirate's ability if applicable. Hands are called ships (which helps to keep everything within the theme). Scoring is built around loot and generally a single game only lasts a handful of rounds. Each round takes about ten to fifteen minutes when you are used to the game. There is a sort of open-ended chaos to the rounds that actually reminds me of a less-structured game of Munchkin - a frequent favorite around our tabletop. 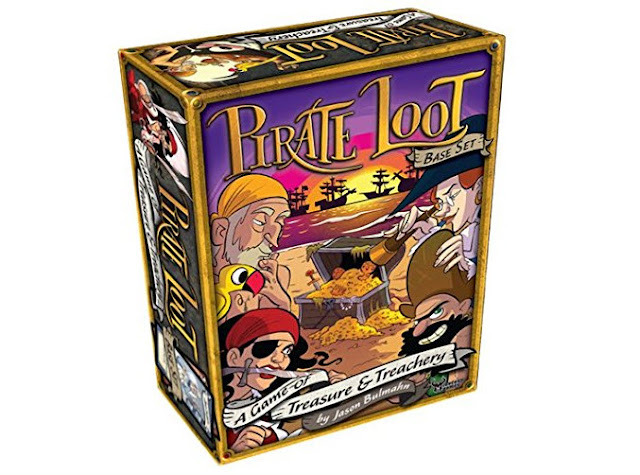 This is because there are cards that hamper your opponents. You want to try and plan for the next round, but even the best laid plans can go awry when you have your crew stolen or discarded. In some extreme situations, a round can last closer to thirty minutes, and the game certainly seems to go longer when you have three or four players as opposed to two.

All in all, Pirate Loot works because it is a quick and accessible game. It will not be for everyone however, as the strategy comes down to your ability to cause chaos and muck up the other player(s). If you enjoy games like Munchkin, Pirate Loot will likely appeal to you due to its funny, often ridiculous themes and fast style of play. Those looking for a more tactical card game however, might find the strategy elements in Pirate Loot a bit too shallow to fully enjoy.