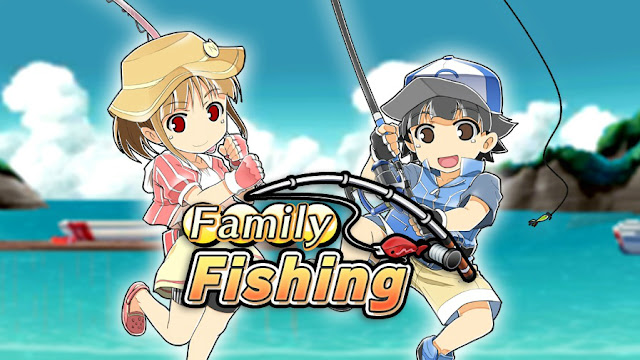 If you are looking for a game that is overflowing with adventure, story and dialog... you might want to cast your line somewhere else. Family Fishing is a competitive game with a faster pace and more challenges than one might expect, but it is still fishing from a shallow pool of water.

To start off, there is a Story Mode, though it is rather misleading. It is more of a career mode than a narrative heavy campaign. You pick your main character, and different fishing rods mean different stats that strike different balances between attack and defense. Each character also has their own unique special ability. Stay with me here, because yes - I am still talking about a fishing game and not a fighting one, though that is the genre Arc System Works is best known for.

If you are thinking "A fishing game? How exciting can that be?" While the title of this game clearly indicates a family-friendly market, there is actually a bit more action than you would expect. The controls are a bit complicated at first, creating a slight learning curve. The touch screen does not get leveraged at all (aside from shop navigation), but all of those different skills and stats I mentioned earlier factor into the fishing process. There is more to it than just simply timing a single button press like you might see in older, simpler fishing titles.

While it was great to have more to do than a typical fishing game, it is not exactly the easiest of titles to just pick up and play. I chose the campaign, which drops you directly into the action. By pressing 'start', you can learn the controls, but they lack the context to fully explain what it is you are doing. This requires a lot of trial and error (more of the latter initially) to figure out how the game's conceps work. 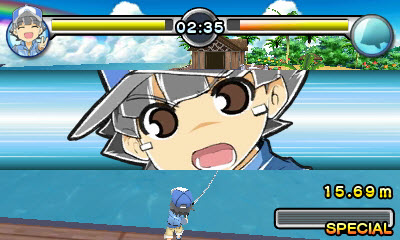 Visually Family Fishing is cute, with a fun and light-hearted appearance. Lots of bright colors and wide smiles make the carntoony, cutesy characters fun to watch. They make little happy noises when successful and the game compliments these visuals with appropriate sounds like splashing, though there is little to no music to speak of and nothing that was in any way memorable about it.

The biggest issue with the game is just how little there really is to do. You can fish but... that is about it. There is no real story to the campaign at all. You enter the game with a goal of getting more points than your competition. The game really does not explain why you are there or what the competition is all about. Each time you end a match, the points seem to reset. Outside of the different stages, there is no real sense of progression. Content is sparse, so while the core concept is fine, there is simply not enough of it there to justify playing it more than a handful of times.

Family Fishing has some interesting ideas, but they get lost under the weight of needlessly complicated controls that are poorly explained and wasted on a game with no real depth. The lack of content and background story make this a light game that fails to motivate you to come back for more once you have fiddled around with it for a short time.