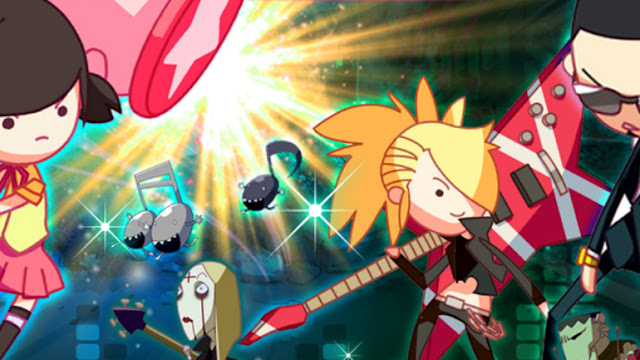 I always thought the idea of being a DJ was interesting. Loving music is only half the battle however as music contains a wide range of genres that will not appeal to everyone. Getting the chance to work for Radiohammer however wasn’t quite what I expected in a gig of this sort as much more time was spent laying the smackdown on weirdos and alien invaders than playing groovy and funky music on the air waves. For anyone just tuning in, this radio station prides itself on the protection of its people even if that means taking to the streets with a ridiculously huge hammer.

Radiohammer by Vinyl Lab and published by Aksys Games is a Rhythm styled Beat ‘Em Up. Starting off in the shoes of the newbie to the radio station, players will learn the ropes and rules of the trade with the selfie queen July Ann and her manager Miss Rabbit (I know what you’re thinking and she’s no Jessica). Hitting the streets in order to keep them safe from a pervert convention happening in the park, learning to swing this giant weapon of cute justice will only be the beginning as there are no shortages of perverts or of awesome tracks to swing to the beat of.

Split up in the style of stages, each DJ will take to the field with their partners in order to lay the smack down to anyone or anything running towards them. Execution of this type of plan isn’t hard per say and may actually be easier than setting up different playlists every night but when it comes to executing it right, well that is a whole different track list that can take some skill and training. Compared to a style like that of Frequency, Amplitude, or either of the guitar rocking games, Radiohammer has less “buttons” to hit but never is it less in regards to the timing required in order to execute a DJ’s moves which is where some of the best controls that I’ve seen in awhile come into play. 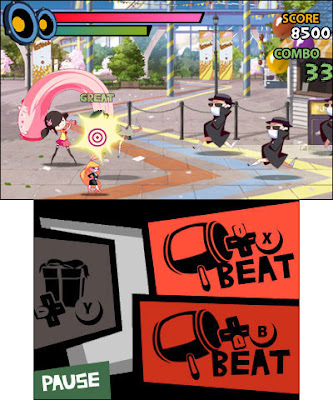 Enemies of the weapon swinging DJs will rush them either on a high or low note as they run from the right side of the screen. Once either pervert, zombie, or alien comes in close enough then it’s time to take a swing in order to prevent these misfits to either cause more damage or any more of a scene than they already have. Swinging high or low depending upon which line that the DJ is being approached is fundamental to not only stay in the game, but also vitally important for combo scores and level objectives. Swinging a weapon too early and the DJ could miss resulting in a combo breaker essentially both taking damage to their health and in certain cases prevention of acquiring a perfect stage score depending upon a stage’s objectives.

The reason for these being some of the best controls used in a long time is because of the ease in which a player can choose to have a DJ swing. Using either Up or Down is an option as well as X or B. Allowing for not only the choice but the ability to actually never have a finger leave the button dedicated to an action makes things more comfortable as anything done becomes an extension instead of a finger bubbling as to which key to hit if a strum is missed. This helps the DJ strike their targets perfectly which not only sounds great and blends into or enhances the song, but also helps bring the score meter higher which is extremely important on boss fights and the DJ’s own survival as things get harrier in the later stages.

Last on the list is the fever mode in which every hit becomes a perfect strike even allowing what could have been a miss to not be if the DJ is very lucky with their frantic quick second swing. The fever gauge is filled with every successful hit regardless of how well the DJ landed it. Bad hits won’t be doing very much while good, great, and perfect hits will show some visible advances of the meter. With one finger dedicated to the up swing and one to the down, all depending on what is currently rushing down the lane one of the two will need to be spared in order to grab presents. Using Left or Y will allow the DJ to accept a present being offered to them which greatly boosts the Fever gauge. Be warned though that just because something props up from off screen does not mean that it is a present. Traps are darker wrapped boxes that unlike Presents will bring the Fever gauge down preventing that awesome splendor of time in which the world essentially belongs to the DJ. 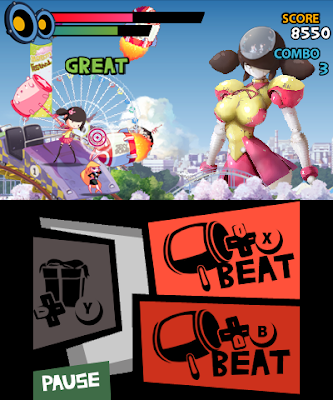 The story mode is a solidly built experience with several characters each with multiple stages of their own built either as a one, two, or three song length. Where things can fall a bit onto a flatter note is the story in which a lot could have been told with the funky situations that our DJs find themselves in. Pervert Convention, Alien Invasion, Rocker Zombies are all prime opportunities for some stellar dialog to have been present but unfortunately the most dialog that is really seen is at the start of a stage set in which only a few lines are said between the DJ and their partner or before a boss fight in which the time is taken for some pretty interesting situations. Even with characters having three episodes in which each have five stages can be a bit short, between the other mode that allows for a second playthrough there is a decent amount of gameplay present especially for completionists.

Radiohammer is both entertaining to play as well as it is to listen to. With many different tracks and stages to complete with their own objectives and increasing difficulty there is more than enough DJ swinging of justice for everyone that wants a piece of it. While the lack of story is a bit disappointing with how much fun it really could have been past the few lines of dialog that are present, the gameplay and the music make up for it in their own way as they create a constant enjoyment with their fast paced nature and enjoyable soundtracks made better only by the sound of a perfect swing.