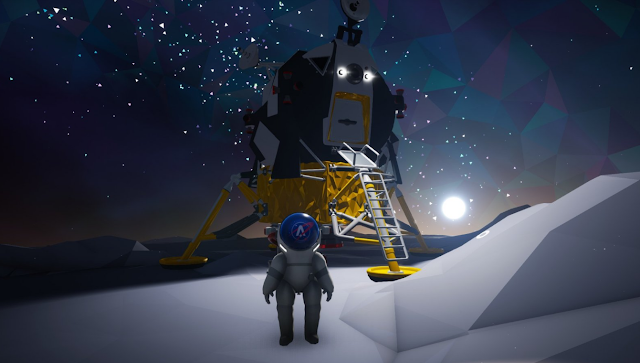 SEATTLE – July 18, 2019 – Astroneer, the accessible interplanetary survival sandbox played by more than 3 million space explorers to date, honors the Apollo 11 mission to the moon with the Lunar Update available now on PC and Xbox One.

For a limited time, the space explorers of Astroneer can encounter the Apollo Lunar Module lander spacecraft on Desolo, the moon of Astroneer’s cosmos. There, explorers have until Aug. 31 to unlock a vintage-themed spacesuit palette and visor, honoring the heroic crew of the Apollo 11 mission.

In remembrance of these inspirational pioneers, the Apollo Lunar Module will also take photos of players in the vintage style of the Apollo TV camera. This camera, mounted on the Eagle spacecraft, was the device that captured humanity’s first few steps on the moon. Trailblazing astronauts are invited to share their photography with #ApolloAstroneer.

Players who find the Lunar Module will hear over an hour of iconic audio, capturing the emotion and mystique of the Apollo 11 mission. Two distinct radio transmissions feature different content. Hear conversations from Mission Control during their life-changing journey on the ATG Channel or listen to astronaut Mike Collins talk to Mission Control from the Lunar Module on the Flight Loop Channel.

Astroneer celebrates the pioneering spirit of space travel by giving enterprising explorers a galaxy of diverse planets to discover and tools to chart, colonize, and traverse the final frontier. The Lunar Update brings the addition of new platforms and storage, equipping hopeful Astroneers for the next era of humanity.

“The wonder and optimism of space travel fuels the adventures of Astroneer, which our intrepid community has come to adore,” said Joe Tirado, Communications Director for System Era Softworks. “No event in history better captures this spirit than the Apollo 11 mission, the heroism and dedication of which inspire our development. We’re tremendously humbled by the mission’s legacy and excited to pay respect to them in our own way.”

Astroneer is available now on Xbox One and Steam for PC for $29.99. It will be on sale via Steam for 25% off beginning Friday, July 19 until Monday, July 22.

System Era Softworks is an independent game development studio based out of Seattle, Washington. Inspired by space-exploration and possessing an optimistic view of space-age futurism, the System Era Softworks team strives to build games that motivate future generations of spacefarers.