INDIE CULT HIT COMES TO THE WEST ON MAY 16


Tokyo, Japan, April 25, 2019 — Japanese publisher GameTomo is very proud to announce the release date for Project Nimbus: Complete Edition on the Nintendo Switch. The anime-inspired mech combat game is slated for a May 16th worldwide release on the Switch. This version of the game includes new content never-before-seen in the United States and Europe, sure to please Western fans of high-speed robot action.

Project Nimbus: Complete Edition is the latest version of the cult mecha game, originally designed and developed by GameCrafterTeam and GameTomo. This version features the original’s full story and combat alongside new modes that had previously not made it to American or European shelves.

The game is set in a far future Earth where three factions fight for the remains of the planet using powerful Battle Frames; classic mecha inspired by the creators’ love of Japanese anime. These Battle Frames take part in fast-paced combat across a variety of battlefields on the ground, high in the sky, and even in space.

Two new modes supplement the original’s content for this release: an improved Survival mode and WARFRONT. In Survival, players will fight against endless waves of foes to cement their standing as an Ace mecha pilot. In WARFRONT, objective-based missions up the ante by requiring the player to survive against infinite odds in a never-ending assault.

Thanks to the Switch versatility, players will be able to utilize their Joy-cons to experience the best of what Project Nimbus has to offer or stay mobile and take to the skies around the house or on the go. Project Nimbus is also Pro Controller compatible for an even richer flying experience.

The announcement trailer which can be viewed here showcases Project Nimbus’ high-tech style and the breakneck speed of its combat.

“We’re so excited to finally bring this remastered edition of Project Nimbus to our fans in the west. We’re proud to have such a supportive community and we can’t wait to reward their patience,” says Reece Scott, CEO of GameTomo. 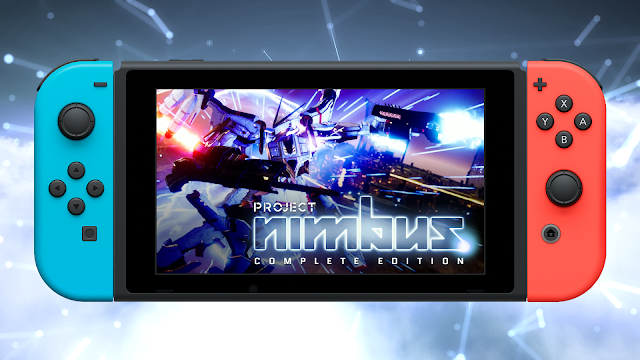 
GameTomo is a team of dedicated indie developers and publishers located in Tokyo, Japan. GameTomo curates best in breed indie titles and hand-picks consequential games appealing to both Western and Asian audiences. Visit them at www.gametomo.co.jp