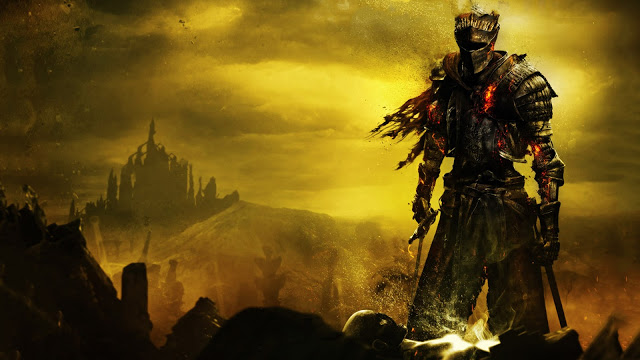 It is hard to believe we have done twenty five of these articles so far, but here we are. Given the recent release of the popular game Dark Souls III, I thought we would make this edition of Memorable Music in Gaming all about the Soulsborne (as Chris calls them) games. Let's go ahead and tackle these from newest to oldest.

Something about this song just grabbed onto me as soon as I heard it. The action is incredibly frantic in this fight as you have to manage attacks from multiple sides. The dark interior, littered with rubble and accented by the flickering orange candles in the background. The music itself, starting with slow tones and a ringing bell set the stage for a hauntingly beautiful song that stuck with me longer after the fight itself had concluded.

Bloodborne -Ebrietas, Daughter of The Cosmos

The Gothic horror vibe that Bloodborne gave off made it one of the most aesthetically pleasing games in the series from my standpoint. I loved the visuals, but the music was fantastic as well. While I was not a fan of this boss fight at all, I could not deny that the music was absolutely awesome, with vocalization that persists and builds over time and lends an epic feel to the entire battle.

Dark Souls II actually had my least-favorite overall soundtrack of the five games. A lot of the songs were 'good' - but did not strike me as terribly memorable. And then I encounter this song, with its strangely sad yet inspiring theme. While most of the Dark Souls II soundtrack failed to stick with me, this song was a clear exception.

Sadness. Despair. Remorse even. A strange set of emotions for an important moment that was punctuated by a nameless song. Appropriate for so many nameless would-be heroes in a nameless world. Arguably my favorite song in the entire series.

This was one of those boss battles that actually made me a little sad when the dust settles. It was of course, a very challenging fight (unless you used the thief ring). Now that being said, a close second for me is the Fool's Idol music, but I think that has more to do with the Tower of Latria, which may be my favorite overall Soulsborne level ever. It was incredibly atmospheric and creepy, with a sort of dark and dank horror feeling to it that was unmatched for me in most other games. But as a standalone song, the Old Hero's theme comes out just ahead.

If I was pushing this list even further (after all, I only do five songs for each one), I would have probably included a song from the spiritual predecessor to the Soulsborne games, King's Field. Alas...