Online gaming has long tried to push the notion that teamwork should be rewarded, but too often it is the solo standout who gets the recognition. This has been especially true of the FPS/third person shooting genre. MOBAs however, require teamwork to win far more often than not, and SMITE is an excellent example of a MOBA that has made the transition from PC to console quite effectively.

It really is all about teamwork. Try to strike out on your own and ignore the needs of your team, and odds are you will lose pretty handily to a better running squad that looks out for one another.Sure, the tutorial will teach you the basics (and kudos to the developers for coming up with a solid introductory experience that thrusts you into the action while still giving you room enough to learn), and early on you feel the power of the deity you represent and for a brief moment there is this sensation that nothing can stop you. Except - lots of things will. Towers, followers and of course opposing gods will kill you time and again as you participate in a quartet of different game modes. However, I never felt like SMITE rewarded Lone Wolf tendencies. Credit to the developers for designing a game that actually has a pretty low barrier of entry. I found SMITE easy to pick up and play, despite not spending a lot of time with the MOBA genre (unlike Chris, who spends a lot of time with these games and was incredibly fond of SMITE when it released on Xbox One).

Upon starting up the game you are stepped through a four part tutorial that I strongly recommend playing. It does a really nice job of teaching the basics of gameplay and the differences between character types and modes. There are some niceties when it comes to helping a new player learn the flow of the game, such as automatic item purchases. These can be somewhat confusing early on (especially since the game was clearly designed for PC initially, which means the text can be a little hard to read unless you have a huge television or are sitting within six or seven feet of the screen - which is not the case in my den) as you are trying to learn the rules of the game, figure out which items will help you most - all while trying to stay in the action. So I ran with the auto purchase for a while until I was comfortable with the flow of things, and then did the manual purchases afterwards. These all seem like small items, but they really do help to make SMITE more accessible to newcomers. 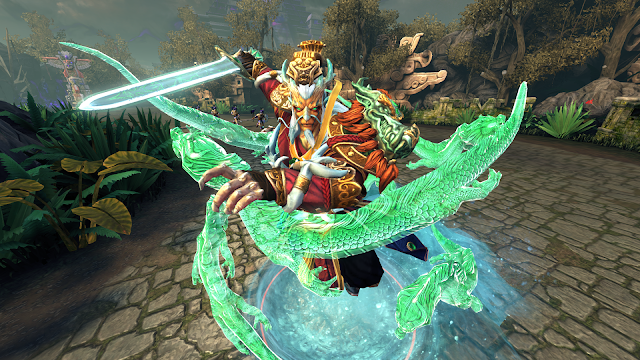 The number of available deities is impressive, and while many of them do have overlap in a skillset or two, there is enough variety to make learning the ropes with a new one an interesting process. Their styles may feel familiar as you have powerful and tanky warriors, stealthy and quick ninja-like assassins, powerful ranged mages and hunters and more, but the way they are so creatively built into the deity chosen to represent each of their skills is impressive and makes learning a new character a lot of fun. I also like that there are options to configure what order you earn your skills in as you level up. Ditto item loadouts you can purchase in the game. I would not recommend tweaking these without some game experience, but as I started to settle into my favorite characters and classes (hunter and mage here - apparently I like ranged attacking), the ability to tweak those items gives you some additional ownership over the characters.

Those modes are pretty standard MOBA fare in my experience, with different types of play. I spend a lot of time in the arena, because the sessions are quicker. Essentially teams duke it out in a pretty straightforward space while trying to kill opposing minions and escorting theirs to the portal on the other side to whittle away at the other team's tickets. In the end the loser is the team who reaches zero first. Other modes have a more epic feel to them, but can take longer to complete. Most of them involve lanes, towers and at the end, a titan to destroy. The key is in picking a lane for your minions and protecting them, killing the opposing ones and letting the minions/fodder take the brunt of the attack from towers/phoenixes/titans while you deal the damage to them. These basic modes come in a handful of different flavors such as more or less lanes, varying numbers of participants and even siege weapons.

Now, to those who are familiar with the name of this game, SMITE has actually been around for a couple of years now. it first came out on PC during the first quarter of 2014 and then hit the Xbox One late last summer. It is a little surprising then, that it took this long for it to arrive on the PlayStation 4. I remember when I first spied the game a couple of years ago, I was really impressed with the characters and the environments. They were detailed with lots of movement and vivid colors, but of course were also built to support a wide variety of machines and therefore never really pushed their systems all that hard. Coming into the game a couple of years later on the PlayStation 4, SMITE still looks pretty good, but it does show its age just a little bit visually. That is okay however, so long as the game runs smoothly, which it does more often than not. 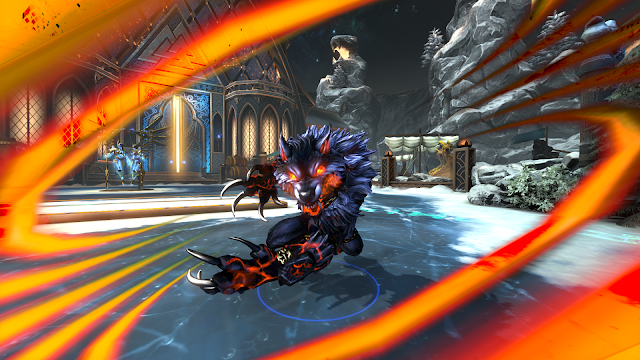 The other aspect of SMITE that I was really fond of was the way it changed your perspective while playing. Most of the MOBAs I have played to date have a slightly more tactical top-down view. Great for studying the map and trying to manage everything happening around you at once, but the behind-your-character perspective of SMITE forced me to keep my head on a swivel due to the limited range of view. It certainly allows stealthier classes to perform in a more realistic way, simply because your line of sight is restricted to the sides and behind your character.

This visual perspective actually lends itself exceedingly well to consoles, however. Instead of having a top-down view of a screen that requires constantly clicking the landscape to move around or interact with things, SMITE and its third person perspective is more action-oriented. This makes targeting a completely different kind of animal and one where the buttons map really well to a controller. I decided to play a few matches on PC just for comparison's sake, and feel confident in saying that little to nothing gets lost in the translation to console from a control standpoint.

That is not to say everything is perfect. Aside from the somewhat simple (at times - I actually found the style very attractive) visuals, the matchmaking proves to be a pretty uneven experience early on. It seemed like the more I played and the more experience I accrued, the better job the system did at lining up more even teams. Naturally as with any online game, your internet connection is key. I had a drop of internet that forced me into a 30 minute penalty right in the midst of my time playing the game. I understand why it is there, to discourage people quitting matches. As someone who lost multiple games on Sunday because I had teammates just sitting there AFK and not playing (seriously, I lost three straight arena matches by less than 15 tickets, and that was with one teammate - a different one each time - just sitting at the spawn point doing nothing visibly for over half the match). However, the thirty minute penalty for something I had no control over was frustrating as a first time offender. Also, the model behind this game is not uncommon for the MOBA genre, but worth explaining for those who are unfamiliar with it. 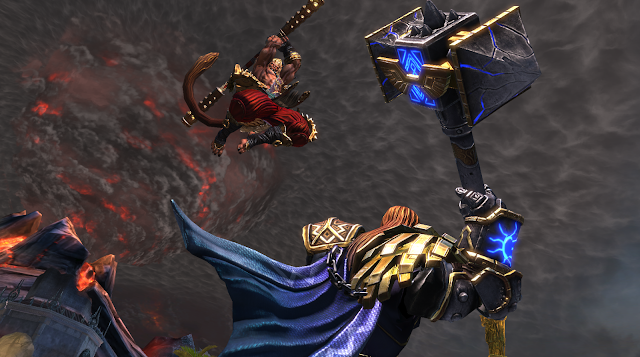 SMITE supports a free-to-play model that encourages you to spend money in unlocking different characters as the roster continues to shift which characters are available for free. If you are patient and continue to come back to the game week after week, you should find yourself having the opportunity to test drive just about all of the different gods eventually - and with nearly eighty characters on the roster which will likely continue to see updates - that is a lot of variety. Of course, should you want to spend some actual currency (you can buy some or earn some through gameplay) on characters, you do get to keep them for future use.

SMITE will not be for everyone obviously, with a pricing model that invites you to come in for free but to spend plenty of money to see everything the game has to offer - especially once you find a character or five that you are incredibly partial towards. However, SMITE has one of the lowest barriers of entry to the genre I have ever seen. The game has made an easy transition over to the console from a control standpoint, the variety of characters is truly awesome and I enjoyed the gameplay which felt unique and different to me when compared to similar titles in the genre. Given the fact that SMITE can be tried out for free, I would argue that if you have any interest in the MOBA genre, you owe it to yourself to give this game a try and see. I found the experience loop and the overall gameplay to be quite rewarding, luring me back in time and time again. 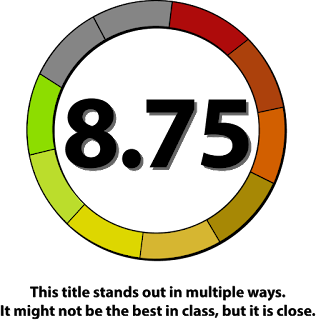