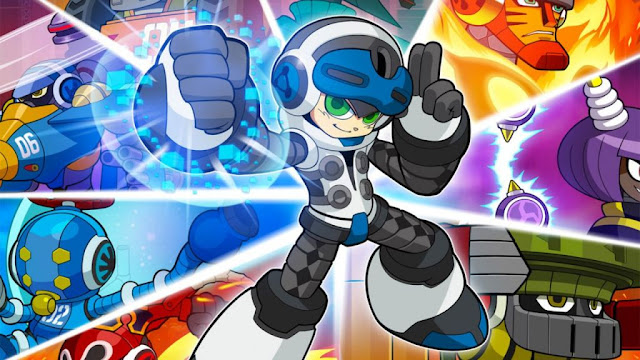 There is nothing inherently wrong with the game Mighty No. 9 as it attempts to recapture the love fans have for the Mega Man games. Having played a lot of Mega Man games over the years, I was pretty hyped to get my hands on this newest effort from Kenji Inafune. Unfortunately it fails to fully capture the charm of the Blue Bomber's prior outings and instead what we have is a perfectly average shooting and platforming experience.

It was always going to be tough to produce a game that delivered on the promise to resurrect the Mega Man series spiritually. Fans would no doubt find something wrong with the game. If we are being honest, even as a fan of Mega Man, those games are far from perfect but they carry with them a satisfying if challenging experience wrapped up in a charming package more often than not. Mighty No. 9 was hoping to set a new bar, greater than what Mega Man had delivered previously, but instead somehow wound up coming up short of equaling, let alone bettering the venerated series.

The classic gameplay is still here to be found at Mighty No. 9's core. You run, you jump, you learn robot patterns and you take advantage of them while avoiding death by both enemy and environment. To this end Mighty No. 9 works well enough. The controls are fairly responsive though at times oddly animated and during specific movements comes across as just a little stiff. Another good thing is that the different enemies come in enough varieties to keep you guessing as our hero Beck traverses uniquely themed landscapes in an effort to stop rogue robots from running amok. 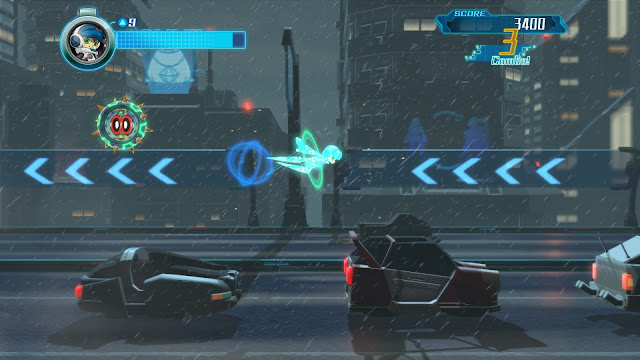 The gimmick to Mega Man over the years was in its non-linear gameplay. Each zone was represented by a similarly themed boss. Navigate the jumps and underlings of said zone, and you get to have a showdown with the boss where you learn how to avoid their different attack patterns while countering with your own assault. Prove victorious, and Mega Man absorbs the fallen enemy's power and can use it himself going forward. This also created a somewhat larger puzzle matrixed into the whole affair, because some abilities come in more useful in some zones and when used against certain bosses than others.

The formula simply worked. Here the formula is brought back to life in Mighty No. 9, but even though it looks and feels the part, something seems to be missing. Mega Man's skills had application outside of boss fights, but here I found myself using Beck's basic arm cannon way more than almost any of the earned weaponry. They often look cool, and certainly some boss fights are way easier based on the sometimes rock/paper/scissors nature of the different weapons you can use against them. Still, there is a lacking sense of progression when beating a new boss and taking their ability should be met with inquisitive joy. This is one of the biggest fundamental issues with the game. 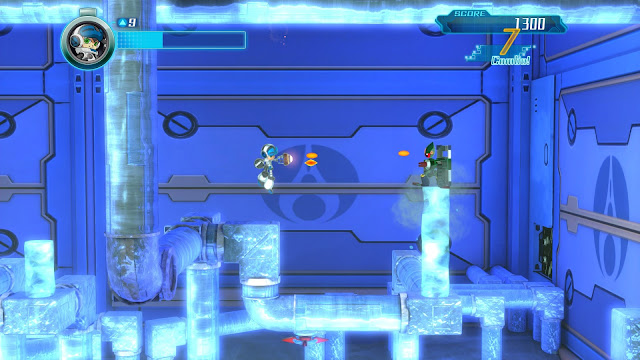 That being said, I was not looking for a straight-up Mega Man clone here, and the new dash attack is generally a good thing. I like how it gets implemented into platforming and boss battles, allowing you to make multiple dashes through the air or under a descending boss to quickly dart off to safety. However, the dash is used as an offensive move as well, and here the results were decidedly mixed for me. You can shoot enemies and weaken them up. Once they are weakened, you can dash into them and absorb some of their energy. It is a big part of the game's scoring and it is interesting in that it runs counter to everything action games have taught us over the years - ramming into your enemies is a good thing. This is especially true during boss battles where you soften them up and then dash into the boss. Of course you can just shoot like crazy too, but enemies will take a lot longer to beat that way. There is an additional feeling of risk versus reward here, and it generally works though there are definitely moments where this combination combined with your basic arm cannon feel more powerful than any of your newly earned weapons.

The style of the visuals is interesting with a 2.5D approach, but unfortunately the execution just is not there. Backgrounds are often drab and uninteresting to look at. Sometimes something from the background gets integrated into the action, such as a falling tower that makes its way to the forefront. The effect and idea seems neat enough, but with the background proving so uninteresting to look at, I found myself overlooking these death traps until too late. This brings up my biggest concern, which is that the game seems to rely on odd one-hit death traps way too often. That is not to say those do not exist in other Mega Man games - they do. Specific areas like the beams in the Quick Man do the same thing but traditionally these games go to that well sparingly. Mighty No. 9 is not as hard as a traditional Mega Man game in many ways, and there are moments where these deaths and a few oddly powerful boss attacks feel like a way to artificially ramp up the challenge. 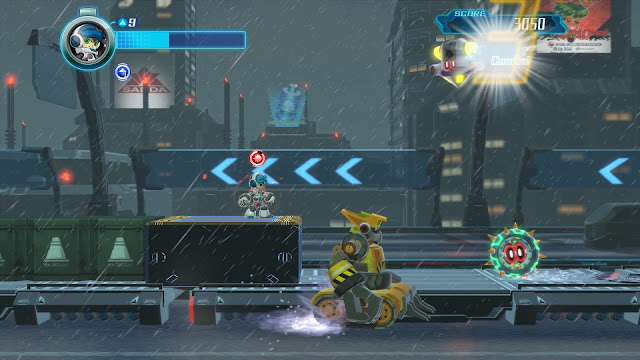 I could appreciate that the developers were trying to frame an actual story around the events of the game, but the characters are quite frankly flat. There is a sort of cheesy charm to how badly some of these lines are delivered, but at the end of the day these cutscenes were as forgettable as most of the stage backgrounds. Add to it that the Mega Man games are known for some of the best music in classic gaming history, and the soundtrack here while solid, also never really does anything to distinguish itself.

At the end of the day, Mighty No. 9 is simply an average game. That is not a terrible thing, it is not what I would call a bad game. Certainly the hype surrounding it helped to elevate expectations that it did not and probably could not have met, so tossing aside the Mega Man comparisons and taking Mighty No. 9 for what it is? You have a bland-looking game with some interesting mechanics that deliver some entertainment without doing anything to make itself a memorable experience. There are worse things than that, but there are also better. 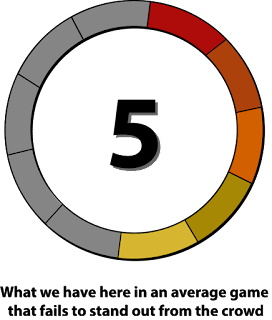