Yomawari: Lost in the Dark Review

Yomawari: Lost in the Dark by developer Nippon Ichi Software and publisher NIS America Inc.—Sony PlayStation 4 review written by Richard with a copy provided by the publisher. 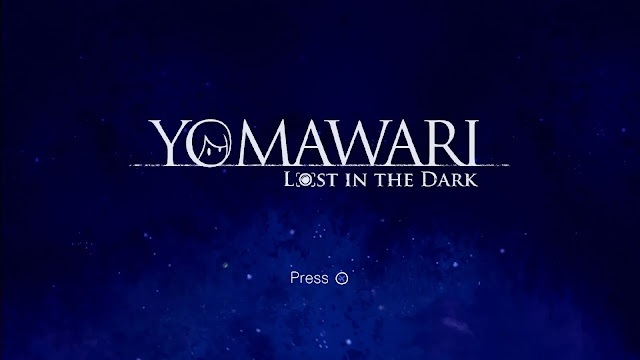 Yomawari: Lost in the Dark is the third installment in a series of isometric survival horror games. A grim and dark exploration of a town plagued by spirits. Armed with your wits and a flashlight, can you survive and break the curse before dawn arrives?

Yomawari: Lost in the Dark features a young girl, Yuzu, who finds herself in a mysterious forest. Yuzu learns that she is cursed, and to break the curse she needs to remember the past that she has forgotten. So it comes to pass that Yuzu must explore the streets of her town at night, searching for clues to regain her lost memories so that she can break her curse. Yuzu must evade the violent spirits haunting her town as well, or else her time will come to an end. 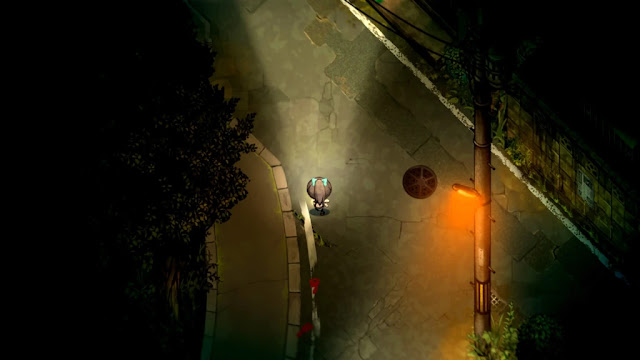 As Yuzu, who is a little girl, you have very little in the way of protection against the spirits. You have a flashlight, some rocks and paper planes you can throw, and you can close your eyes. Not much, but it's all you've got. The flashlight will be your number one tool for a variety of reasons. First of all, one key gameplay element of Yomawari is that there are TONS of things to pick up. Seriously, there's a lot. While a bunch of them are consumable items, you will also be picking up tons of other items. These can be anything from informative notes, key items needed to interact with something else, room decorations, appearance altering items, or just items to go in your "list of things I've found". These items, for the most part, can only be seen as a shining object if you are using the flashlight. No light? No item.

An interesting mechanic added to this Yomawari title is the ability to close your eyes. While your eyes are closed, a bunch of different spirit types will no longer be able to see you, as they rely on you acknowledging them in order to find you. While your eyes are closed you can slowly walk, avoiding the enemies that show up on a darkened screen as pulsing red heartbeats. Be careful though, as not all spirits will care that you aren't looking at them.

As you explore around town, you will also pick up consumable items, such as pebbles, paper planes, and coins. Pebbles and paper planes may be thrown to distract some spirits, with the planes being thrown farther. Coins can be thrown as well, but mostly you will likely be using them in order to save your game. You can save by offering a coin to one of the many Jizo statues around town, or back at your house for free. After a certain point you can also use the Jizo statues to fast travel around town. 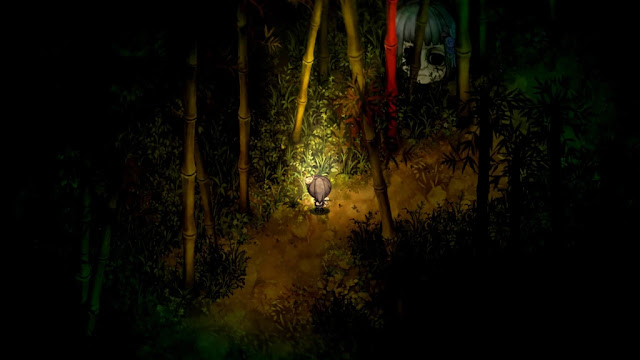 In order to help keep yourself safe, you have a heartbeat sensor that sort of doubles as a stamina bar. When not scared or in the presence of a spirit, Yuzu can run for quite a long time while slowly decreasing the stamina gauge. Get too close to a spirit and the heartbeat gauge increases? Your stamina depletes extremely fast. The heartbeat sensor is a good way of determining how close you are to a spirit, as it will start off with just a red pulse, then give a quiet heartbeat when you are usually within a range to see the spirit, followed by a heavy heartbeat that normally indicates a spirit is within range to see you.

Yomawari: Lost in the Dark is…largely survival horror. Well, it is in the first half, at least. While you are exploring the town, and the areas associated with your first few memories, I found it to be rather frightening at times. Spirits could pop out from anywhere. I was being chased around by saw wielding children, women would fall on me from the sky and crush me occasionally: all very frightening things. About halfway through however, you start to realize that spirits are always in the same locations, meaning once you figure out how to deal with them, they aren't all that frightening anymore. Don't get me wrong, I still get surprised by the occasional spirit, but the fear factor gets dialed back quite heavily.

Similarly, while the areas with your memories are rather unique locations with unique gimmicks or mechanics, only a few of them are particularly scary, and the rest are more of an exploration event. Couple this with the fact that dying doesn't really mean too much and the fear factor drops out of the game. Dying will basically just send you back to the last checkpoint or Jizo statue, which may be a little annoying to walk back from, but you also keep anything you've picked up. Consumable items will also respawn on the map for you to pick up, so that worry of not having enough coins to save with or pebbles to distract spirits kind of goes away. 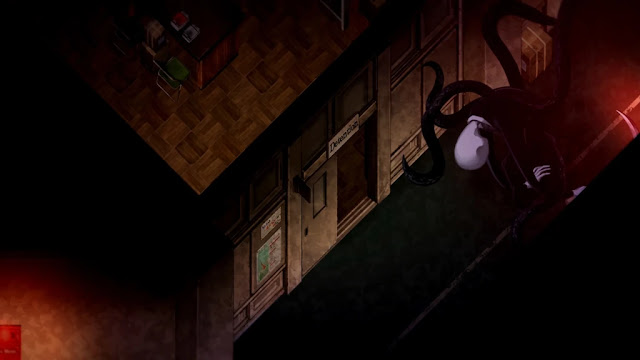 Don't get me wrong now, if you didn't keep anything you picked up when you die, I'd probably be flipping tables. As I mentioned earlier, there are a TON of collectibles, some of which are in really annoying places, so dying after performing an annoying side quest type mechanic and not keeping that rather cute bird plushie now in your room would be absolutely infuriating. Speaking of, a lot of the items you pick up will either be placed in your room or used as cosmetic accessories. For example, some of the screenshots here you might notice my character wearing a fox mask. This was an optional item I picked up that allowed me to wear it when I went to the closet in my house. Similarly, some items will populate your room as colourful knick-knacks.

Speaking of appearance, I have to say that Yomawari: Lost in the Dark strikes a very good mix between creepy and cute. The ghosts and spirits are generally creepy, or even frightening, the locales can also get really creepy, and more often than not you end up inching your way through so as to not alert the wandering spirits. Human, or human-ish characters, are rather the opposite, having this cute sort of Chibi stylized look to them. Your main character as well, Yuzu, can change her appearance from your closet, including hairstyle, bangs, accessories, and backpack type. It's really gratifying to see that item you suffered to acquire show up in either your room or as a cool new accessory to wear.

Like the visuals, the audio also strikes a good chord, or maybe an off-key chord would be better to say? The ambient music is often quite creepy, coupled with the loud thumping of the heartbeat when a spirit is nearby really does wonders to drive up your tension. Flashbacks in memories are also coupled with a fitting soundtrack piece. The only real complaint I have is the annoying bugs in the rice fields. GRUARGH they bother me. 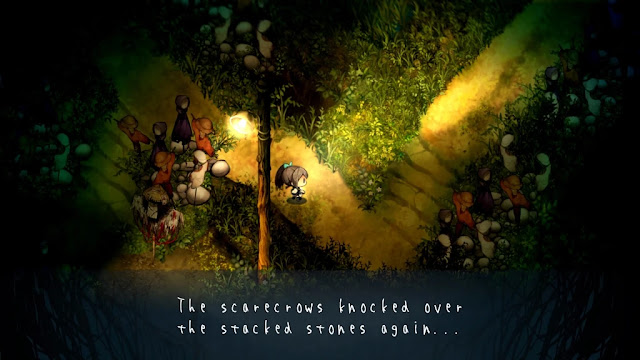 Yomawari: Lost in the Dark definitely isn't perfect, but it is a lot of fun. While the horror aspect drops off the more you play, it certainly still gave me a few good starts in the beginning. If you look only at the core plotline, Lost in the Dark isn't all that long, but going back and getting all the collectibles is what really fleshes the game out. You will learn more about the town you're in, as well as getting new cosmetic items while solving mini puzzles or tricks and seeing new spirits.

Overall, Yomawari: Lost in the Dark is a great title. While I haven't played the previous two titles, I certainly want to now. Setting a great creepy atmosphere with the soundtrack and visuals, as well as a large number of collectibles to implore you to explore and put yourself in danger makes for a good time had all around. If you're looking for something a little spooky yet cute, this might be the title for you.