Crypt of the NecroDancer - PS4 Review 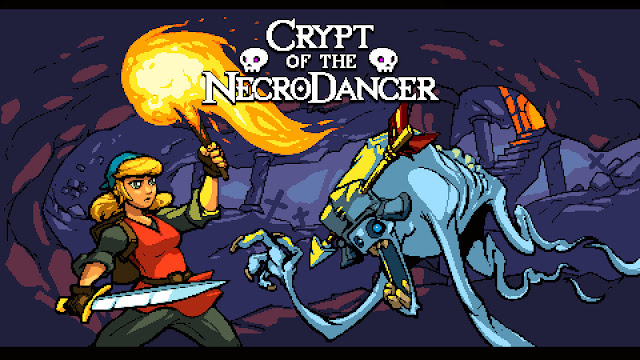 Before the actual review gets going, there are a few things I need to mention as a preface. First of all, this game came out on PC a while back, and while I was intending to pick it up, I never actually did so, so I have no idea about any possible changes between the PC and PS4 version, if any. Secondly, I suck at the game. Like, really badly. That being said, I absolutely loved it.

For those who haven’t played before, Crypt of the NecroDancer plays like an old-school rogue-like: randomly generated dungeons, kill mooks, find gear, fight bosses, pray you don’t die. There is one major difference to traditional rogue-likes, however. You’ve gotta move to the groove (yes, literally). The game is a weird mix of traditional dungeon crawler and rhythm bases, featuring a strange blend that sounds like it would be one of those mad science projects, but has turned into a wonderful work of art. As a general rule, I tend to stay a few paces back from rhythm games. Not because I don’t like the genre, but because I can never seem to stay on the suggested beat. Despite the fact I can play five instruments, I can only say this boils down to how most rhythm games function: a set beat with visual cues.

Unfortunately, these visual cues tend to be the basis of the genre, and I can’t follow the visual, but have to go to the audio beat instead. If there aren’t any calibration options, this usually involves me failing miserably. Much to my joy and surprise, Crypt of the NecroDancer seems to work in the exact opposite manner, where the movement is based on audio, and you can calibrate the visual at the start of the game. In order to adequately move, and fight, you need to time the directional input with the beat, something easier said than done, considering most of the enemies won’t give you enough time to learn their patterns on your first few encounters. 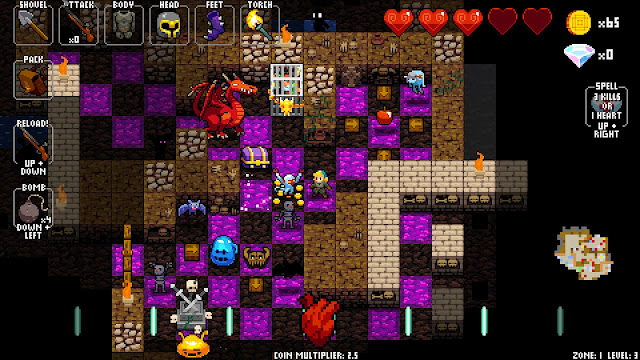 The game is by no means easy, but that just adds to the fun of the game. There are multiple characters, unlocked through story progression and certain conditions, some of which come with really handy effects, which are actually justified in-game, that can make clearing certain stages or certain mechanics a lot easier. Other characters are a piece of design sadism very rarely in games nowadays. Huzzah for the one hit-point wonders. In order to get the full experience, the game has you play as three characters sequentially, so you can get a feeling for a lot of the hidden nuances of the game. One less than ideal factor the developers added was that you automatically get dropped to the next floor every time the floor song ends. Now, while I do think this is a wonderfully unique and innovative idea, my compulsion to explore every nook and cranny of a floor in a dungeon was my downfall (literally) far too many times to count.

Controls are simple and intuitive, and the vast majority of the mechanics are easily figured out with either minor explanation or a little testing, making the game really easy to jump into. The game definitely frustrated me (I’m looking at you red dragons), but frustration isn’t necessarily a bad thing. The more I failed on the first two floors, the more indignant I got about the game. This frustration turned into half the fun of the game, for it wasn’t the game itself that was aggravating, it was my own lack of ability, just providing more reason for me to get better to show the game “Yes, I CAN beat you!” in a final act of defiance to my lack of skill.

Now, how can we discuss a rhythm game without commenting on the soundtrack? The soundtrack is glorious. Right out of the door you’re hit with a face-full of what can only be described by “MMMM”. The rest of the soundtrack doesn’t let down, either. The soundtrack encompasses a lot, including: rock, electronica, blues, metal and house. There’s a great variety in the songs offered, which can be seen beautifully in the third stage, which alternates between a hot and cold section. As you leave one side to head to the other, the hot and cold themes blend, and then one takes over when you step into the area you want to get to. The transition was beautifully well done. Then we have the shopkeeper. He sings. To the music of the floor. It even changes for the hot/cold floors. It’s one of the little things where you first hear it and think: I love the effort put into this. The first time I heard about this game wasn’t from a friend or from a steam sale, it was actually because I was listening to video game A capella, and a suggested video came up called “4-1 wight to remain with shopkeeper real voice”. Intrigued I gave it a listen, and I was not disappointed in the least. A game like this really relies on the soundtrack crafted for it, and I can honestly say it was masterfully well done. 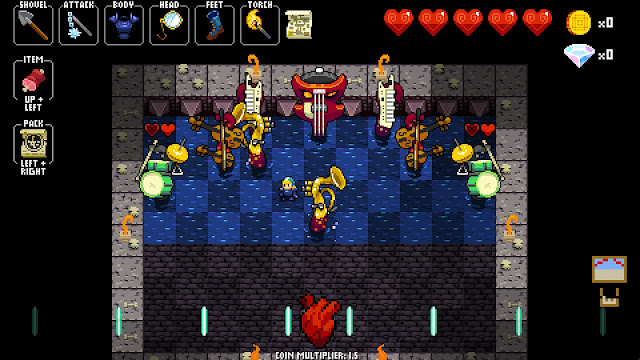 Going with the rogue-like style as its basis, Crypt of the NecroDancer uses what I would call “12-bit”, and yes I know that’s not a real thing. The game feels like it was created as a throwback to older games, and Brace Yourself Games did a wonderful job of recreating the feel without going overboard. A lot of the one-off indie “retro” styled games you can find nowadays aren’t really 8-bit, but closer to “minimalist” games, but that’s not the case here. Crypt of the NecroDancer is everything I used to love about ye olde dungeon crawler/rogue-like, neatly wrapped into an awesome sounding package.

The lack of exposition and back-story were a little aggravating at times, but if you do manage to clear the game with the three main characters, the entire plot is there for you. The story is revealed each time you clear an area (three floors and a boss), and comes in the form of a short scene where you learn a little about the current characters past. The story is a lot better crafted than I was honestly expecting, further prodding me into getting back in there to deal with those ridiculous dragons of death.

Overall, Crypt of the NecroDancer is a game that really shows what indie developers can be capable of, delivering a magnificent game that will grab you by your pants, shake you around a bit, and toss you out with the trash, yet you still have to come back for more, despite the possible beating in your near future. While the game isn’t strictly speaking lengthy, the dungeons are randomly generated, so it’s highly unlikely you’ll ever have the same adventure twice, not to mention a plethora of different characters and innate abilities to choose from and enhance your experience. The game is great, and I kept finding myself coming back saying “I want more of this”.