on March 23, 2012
I remember hearing a bit about Mass Effect prior to its release, but it was not a title I was terribly excited about.  My only real experience with Bioware at that time had come in the form of Neverwinter Nights, which I had thoroughly enjoyed - but it was quite clear that this science fiction title was going to be a completely different animal.

Finally for Easter after it released, I picked Mass Effect up used because of the overwhelmingly glowing reviews it had released to.  I gave it a shot, did not much care for the shooting mechanics and put the game away in favor of other titles I was working on at the time like Oblivion.

Some months later, I had beaten every game in my current library except one.  I decided to dust off Mass Effect and give it an earnest chance this time.  I made my way through the first few hours, fighting off the confusion over the strange blending of shooter and RPG as I became more comfortable with the mechanics and the game's universe.  Fast-forward about 50 hours and I had just beaten the game, and found myself wondering how things might have ended differently if I had made some different choices at key moments.  I then proceeded to find out as I immediately played through it again.  I would go on to beat the first Mass Effect two more times over the following few years as it became one of my favorite video game titles of all time. 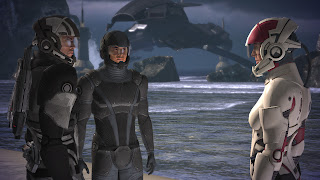 At the time this game was a lot more impressive.  I still appreciate the artistic direction that was taken in a lot of the worlds as your team explores them, but if I'm going to be completely honest, there were flaws in the engine.  Lighting effects could get weird, casting strange shadows over a character's face.  During some of the more hectic battles, serious slowdown could occur as well. 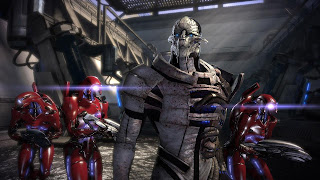 The voice work in here is excellent, and it really needs to be because there is a lot of dialog in this game and it is almost all spoken.  The sound effects are solid enough, though they do have the issue that many shooting style games suffer from where they can become a bit repetitive without offering the sort of surround sound immersion I notice in some titles like the Call of Duty series.  And then there is the music - which I absolutely love.  Seriously, one of my favorite gaming sound tracks to date, even if it is not quite as large and varied as some other RPG's out there. 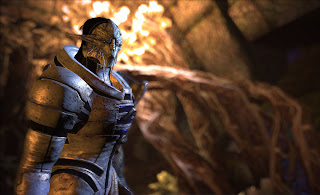 The shooting mechanics work, but they definitely take some getting used to.  At a glance Mass Effect looks like it wants to be Gears of War with its third person perspective, but it obviously is not.  The RPG elements are handled well, especially the conversation wheel that allows you to make choices for your character throughout the storyline.  Menus are not a complete chore to navigate, but there is a lot of inventory stuffed in here and it does sometimes seem to slow you down more than it should. 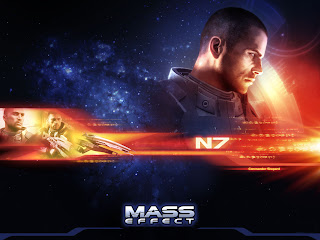 I don't know if you saw the part above - but I played through this game 4 times.  I expect I will play it again after beating Mass Effect 3 once.  There are a lot of ways in which you can impact the storyline, and you come to appreciate this even more when you load in a saved game from this title into Mass Effect 2.  Here choices made really do have consequences, which is an empowering feeling that makes this more of a 'roleplaying game' than many of the more linear titles of my youth.  I love a Final Fantasy game, but Mass Effect gives you a lot more freedom of choice. 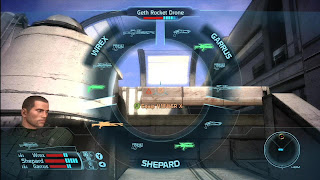 Mass Effect has aged pretty well over the last three years and change.  While not a perfect title, it kept me coming back for more. It also laid the groundwork for the excellent sequel I will be talking about next.  There are themes that are definitely adult-oriented and as such none of my kids have played it.  The game itself is not too hard to find used now, and at a low price.  If you can wrap your head around an RPG title with shooting mechanics, then I have to recommend this title to anyone that might be of interest to.