Bright Memory: Infinite by developer and publisher FYQD-Studio and publisher Playism—Sony PlayStation 5 review written by Pierre-Yves with a copy provided by the publisher.

Following up on their one person development team’s fast paced fan-freakin’-tastic Bright Memory, FYQD-Studio is back for more fast paced action with Bright Memory: Infinite. While technically a sequel and starring the same protagonist Shelia, Infinite takes a different direction than the first and again leaves us wanting more of it. A lot more of it. 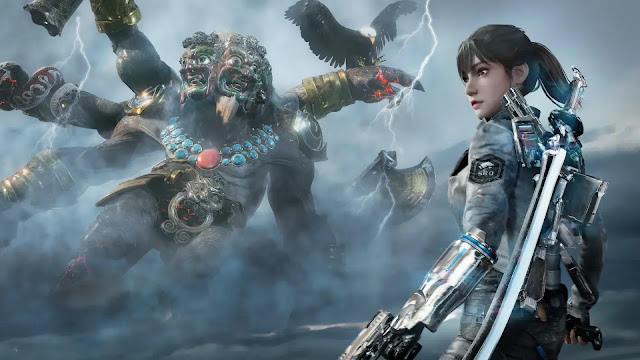 Quoting the FYQD-Studio off of their Steam page,

"Bright Memory: Infinite is the sequel to the popular Bright Memory. However, the sequel features an all-new world, along with newly created improved battle system and level design.

For Bright Memory: Infinite, I wanted to focus on adding content to give players a more satisfying experience. As a result, development took three times as long as Bright Memory. This process allowed me to learn how to create a strong game while dealing with time and financial constraints. I spent a lot of time thinking of ways to maximize whatever technology and resources available to me in order to deliver an unforgettable experience through the game. As such, Bright Memory: Infinite represents the culmination of FYQD Studio's growth."

So essentially starting off from scratch, this helped me place myself in this new experience without holding out for some of the elements from the first. Set in a first person shooter style, Bright Memory, and now Bright Memory: Infinite, are anything but slow. You're supposed to move around at fast speeds shooting anything that moves and slashing anything that gets close with your sword.

Now here is where I once again find myself torn. 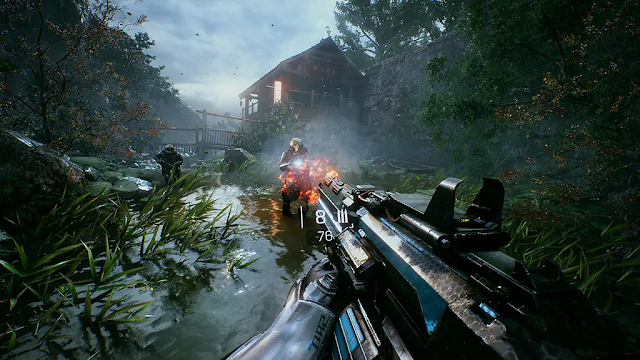 On one hand, you have this stellar high paced action hack & slash shooter which looks fantastic and is all done by a single person. On the other hand, the adventure when all is said and done is less than 2 hours. While 4 times longer than the original, Infinite feels like an introduction session to the main course making you want more even after obtaining the Platinum Trophy on your third playthrough at the highest difficulty.

Now while it would have made more sense to replay the original first, I didn't. Instead, I jumped back into the original after my first run of Infinite to compare and probably the biggest differences are the elements that didn't make it back for an encore. More mythical monsters such as undead warriors and chimera, a combo counter with a grading system and gaining experience like an RPG to level up your skills. Was this a bad thing? I don't think so, no, as Infinite has streamlined various elements making it almost even faster paced than the original.

Instead, you'll generally be facing off against more human-like enemies such as human soldiers and some rather imposing looking ancient warriors that can decently shrug off your standard bullets. So it's a good thing that in Infinite, Shelia is equipped with her sword that can be used all the time instead of having a cooldown. Swordplay has become almost integral to this adventure as not only will you hack & slash at your enemies, but you can also block bullets, send bullets flying back and parry blows from even the largest of foes! 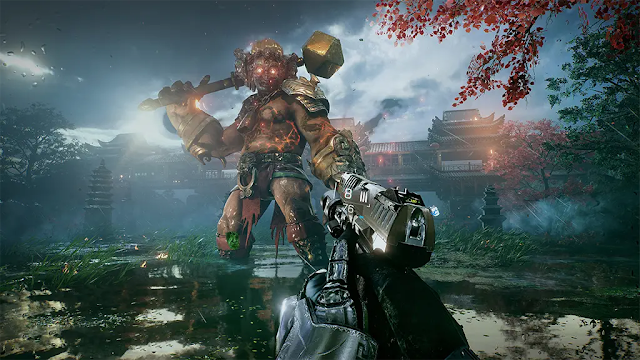 Having access to your sword like this also increases the pace of gameplay as it doesn't matter if you're using your guns or your sword, you don't need to stop. Both have their uses and that's before getting into special abilities that you can unlock such as a lightning punch that once fully upgraded, can launch a fireball once its fully charged burning everything in its path. Your sword also gets some new neat abilities like being able to launch itself forward and auto attack enemies while you worry about dodging out of the way of incoming fire or melee attacks. Finally, you can perform a ground and pound for anyone unlucky enough to stand beneath where you're coming down from a jump.

To not only offer "more" of the same even with the adjustments, there are completely new gameplay elements to Infinite in which one works really well, and the other I would like to see refined if it's to be used in the next iteration. Keeping spoilers out of it, there's now a stealth section that slows down this super fast pace to something more of a walk, not a crawl, as you'll still be moving around quickly enough. This also isn't a choice as if you've been spotted you're pretty much dead. It makes sense in context and also shows that FYQD-Studio are willing to do more than just "more of the same".

The other new gameplay element is a car chase making me think that Shelia could potentially star in her own James Bond movie if that's what her Q can dish out. Super slick to look at though, sadly this is the newer element that didn't work as well for me. While everything inside of the car looked great, it was the responsiveness of the car that didn't work for me. Essentially putting the pedal to the metal didn't feel like it did anything as going from 0-60, whether kilometers or miles an hour, felt like a slow advance when it should have felt like a thrill ride. It was a slow crawl forward and with everything else so fast paced? It didn't fit as well as it could have.

Because other than that, change in design forward or not, Bright Memory: Infinite is a hell of an experience and a worthy successor to Bright Memory. I just wish it was longer in terms of everything as it does feel more like an appetizer than a main course.