Capcom Fighting Collection by developer and publisher Capcom—Microsoft Xbox Series X|S review written by Nick with a copy provided by the publisher. 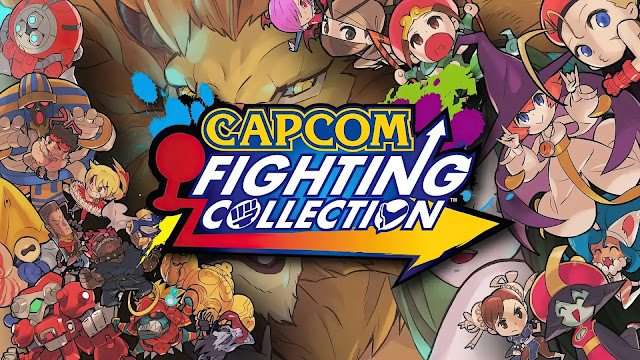 Capcom Fighting Collection is simply one of the best video game compilations I have played in a long time. One could quibble that it is a little Dark Stalkers heavy, but the mix of familiar and new with lots of extras makes this a thoroughly enjoyable release.

First, the collection of games:

●     Vampire Savior: The Lord of Vampire

That’s a pretty robust list, and while I was familiar with several of the titles, there were some new ones to me as well. Of course, the first thing to note is that half of that list is made up for the excellent Darkstalkers titles. These always felt like a slightly floatier Street Fighter series, with some similar mechanics all wrapped up in a gothic theme. Vampires, werewolves, mummies and more make up the colorful cast. 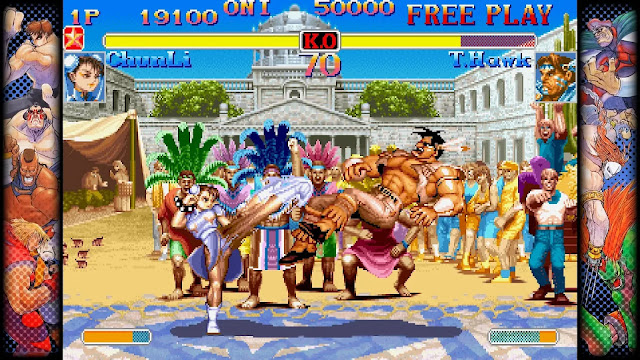 While I had played a few of these titles heavily back in the day, two of them were Japanese-only titles (Darkstalkers’ Revenge and Vampire Savior 2: The Lord of Vampire) that I had never played before. Admittedly, I wasn’t getting much out of the cut scenes sprinkled in between the fights, as I couldn’t read them – but I seldom played old school fighting games expecting narrative depth.

I was there for the combat.

To that end, the Darkstalkers title holds up really well today. Some of the games showed more evolution than others. For example, the differences between Darkstalkers: The Night Warriors and Night Warriors: Darkstalkers’ Revenge are rather minimal. Still good stuff, but perhaps not all that different from one another.

Then when you get into Vampire Savior 1 & 2 as well as Hunter 2, the style of the visuals shifts a bit. Whether it’s the characters and their designs (like Q Bee) felt fresh. The graphics and music were excellent for the times, but of course all of it is dated by modern standards. That said, the environments were more engaging here than the prior two games I discussed. It’s odd to use terms like ‘Gothic’ and colorful together, but those are the adjectives that come to mind. Character designs (such as the brightly colored Red Riding Hood inspired character) pop against the often gray / brown / dingy backgrounds. 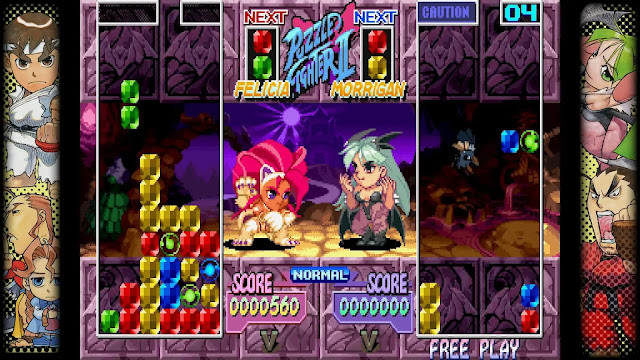 Hyper Street Fighter II: The Anniversary Edition likely needs little to no introduction. The Street Fighter II game (and it’s numerous spin-offs) were hugely popular in the arcades when I was a teenager, and I dropped a lot of quarters into those cabinets while I was sucking down Big Gulps at my local 7-11. Classic combat, brisk pacing, familiar characters – probably the biggest hit of nostalgia for me in the entire package.

Cyberbots: Fullmetal Madness was a game I had no context on, having never played it. Immediately it felt a little different because you pick a character – but all that does is play out the story for you differently. The combat has nothing to do with the character, but the type of mech you choose. There’s different classes and subclasses of mechs that act as your actual combatants. There’s a sort of clunky simplicity to the combat, which uses fewer buttons than some of the games, and giant metal-covered machines probably should feel a bit less graceful than an expert martial artist.

Throughout combat there’s an interesting sort of tension that gets applied where you can damage the machine and it has implications such as cleaving off your opponent’s arm, weakening their attack. It sort of reminded me of the Samurai Showdown titles where you could get disarmed (but more literally) and working from a limited position in combat until you retrieve and reconnect it. 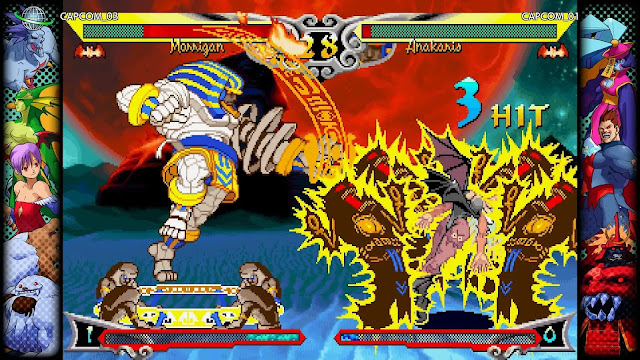 Super Gem Fighter Minimix is an odd one, and probably my least favorite of the titles. This sort of thing is subjective of course, but a simplified, clunkier version of streetfighter where the focus is more on gathering gems to boost up your character than outright fighting your opponent is just sort of an odd premise. It’s cute, it just always struck me as kind of unfocused. As cool as this game is, calling it a ‘fighting’ game is a bit of a stretch, but at least the Street Fighter theme gives them a good excuse to include it, even if it’s really more of a puzzle game.

Super Puzzle Fight II Turbo has long been one of my favorite titles. I’ve always been a sucker for action / puzzle games such as Tetris or Columns, and this one is just addicting. The premise is simple enough – you drop colored gems onto other similarly colored gems to create larger blocks of gems that you can eventually match away to perform ‘attacks’ on your opponent in a visualization of Street Fighter. It’s a little hard to explain, but highly addicting and as much fun as I remember.

Red Earth is an odd duck, but a weirdly enjoyable one that I would have likely sunk oodles of time in had I played it when I was younger. At first I saw four characters to choose from and thought there was not going to be much meat on these bones. However, this fantasy title has some lightweight RPG elements (experience, leveling up, gaining new abilities) mixed with some different endings. They mostly revolve around how many continues are needed to win, but there’s some choices baked in there too. I honestly had never heard of this title before, but I think I spent as much (if not more) time with this than any of the others. 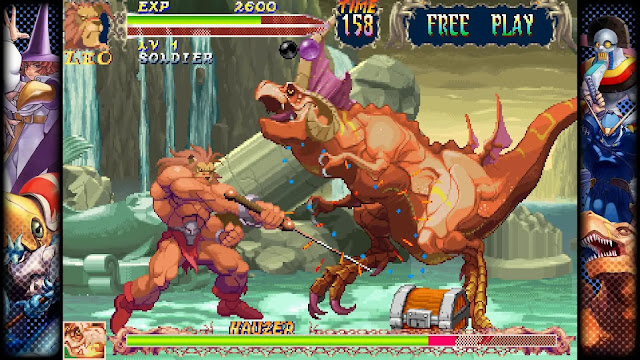 Still, the collection is about more than just the ten games. There’s quite a few options baked in here as well, from online modes, to a variety of settings that can make the games as hard or easy as you like, quick saves for those who need to leave before they’ve finished their session and a virtual museum with materials from across the ten titles such as music and artwork. In this day and age people are expecting more out of ‘collections’, and I would say by and large the packaging here does not disappoint.

Capcom Fighting Collection is a fantastic value for those who enjoy fighting games and want to play some of the best to ever come out. There’s traditional titles like Darkstalkers and Street Fighter, some unique takes on the genre with Cyberbots and Red Earth and even a fighting themed puzzle game squeezed in there for good measure. It’s perhaps a bit Darkstalkers heavy for some, but I appreciated the mix of familiar titles and games I had never played before.