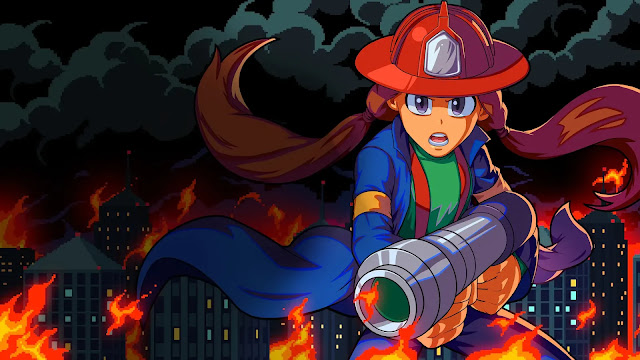 Firegirl: Hack 'n Splash Rescue DX by Dejima and Thunderful Publishing is the latest version to be released of this 2.5D platformer roguelike. Set in a world where fire demons are being led by a Fire Lord and causing chaos by burninating everything in sight that would make even Trogdor proud, you're here to stop them with the titular protagonist Firegirl.

Firegirl is the kind of title that makes me think that it would have had a perfect home on the PlayStation Vita a few years back and caught my interest when Jim reviewed it for the PC. Never too heavy on the mechanics, there's still a fair amount under the hood as you'll be running, jumping, blasting water and using water to blast off all while exploring various areas to save survivors caught in the destructive fiery path of the demons currently setting the city ablaze.

What I appreciated from the beginning is that Firegirl doesn't overcomplicate itself which is great especially for a roguelike, or perhaps in this case, roguelite which in either case are designed to make you fail. Your controls themselves are fairly simple. By using the right trigger, you can shoot water forward. The harder you press, the further the water will shoot and this can be easily upgraded as time moves on. Going more vertically, Firegirl can jump, but, Firegirl can also use the water pressure of her hose in order to fly upwards and then across to make it across larger gaps in the terrain, or, to tackle enemies from above. Finally, Firegirl has an axe to break down doors and debris that are in the way of rescuing survivors and pets that are trapped in the burning buildings. 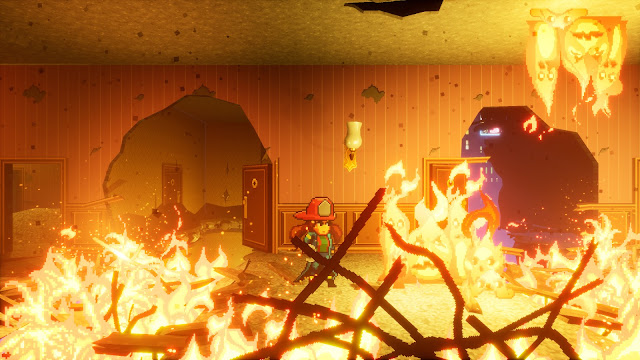 Once you've gotten your feet sufficiently wet by putting out the fires in your typical run of the mill apartment complexes though, you'll then find yourself running across a train, through a forest and through an extensive luxurious plaza which each have their own quirks. Just make sure to learn from your mistakes and check out your surroundings though as Firegirl's adventure is still a rogue-like / lite and it's not afraid to take you out if you're too overconfident.

While the initial mentioned goal of saving survivors is a simple one, it's never quite that easy. For starters, everything is on fire and running into the flames or the demon's flames will hurt you. Starting off with four hearts, you'll eventually be able to acquire more but in the meantime you'll have to be careful as there's a fair amount on the line. If you fall while on duty, you'll get a meager pay from the city but have to pay hospital bills. If you only rescue a percentage of the people, you only get money from the city but don't pay hospital bills. If you succeed? It's payday!

Like in real life, payday is the best day of the week. It comes into your bank account and did you hear that whooshing noise? Yes? That's the sound of it leaving. Much in the same way, most of the money that you'll get from the city and "fans" of your work will help to pay for upgrades. For Firegirl herself, you'll be able to get a few armor pieces before worrying about your hearts. Also up for sale is a new lighter axe which allows you to really move instead of having to stop every time you need to break open a door. 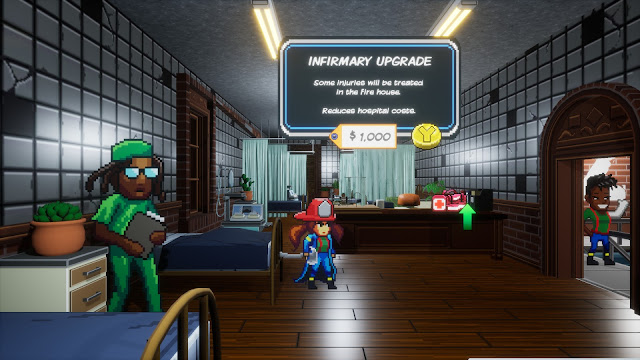 Aside from these direct upgrades which can be found in a shop across the street from the Firehouse that acts as your hub, there are a few others which will eventually become available within the Firehouse itself. Direct upgrades which can affect your performance are upgrades to Firegirl’s water tank for better spray and jump range as well as being able to hold more water in general. While useful, you'll need a bit of help to pay for these upgrades, by buying other upgrades. These other upgrades come in the form of bringing down the cost of all upgrades, increase the amount of money that you can get from the city, and finally, getting money from the above mentioned “fans”.

Fans are perhaps the most interesting element to your income which directly affects your cash flow. Starting off with none, you’ll soon be getting hundreds to thousands of them as you rescue survivors, cats and cuddly looking bears in the burning forest. These fans are where your real money will come in and will only give you money if as mentioned above, you rescue everyone that’s required AND make it out safely. If you don’t, you get nothing from them and by mid to late story, that’ll be the difference in receiving 2-6k from the city, or 36-40k on top of the 2-6k from the city to pay for some fairly expensive upgrades.

While there is a fair amount of rinse and repeat, which is to be expected in a rogue which constantly adds more every time you dive into it, it all comes to a climax once you manage to collect 12 of the 13 Fire Tomes. While mentioned a few times over the course of the story, finding them is the tricky part as it’s random whether one will even show up in the stage that you are doing which can add a bit of artificial padding. While I did enjoy the increasing challenges, having that progression locked by luck I found to be a bit annoying especially as I neared a point of having unlocked every single upgrade. 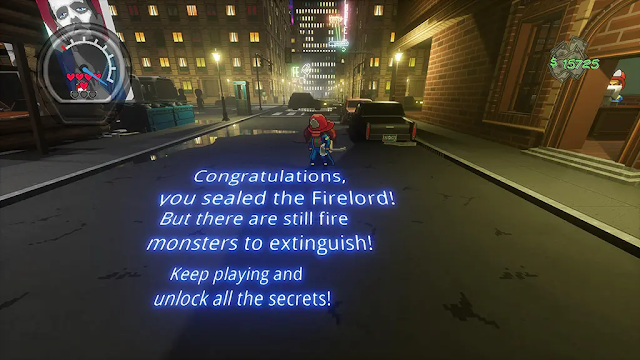 Once that’s done though, Firegirl gives it one more stellar go against the only boss fight of the adventure, the Fire Lord himself. And you know what? It was totally worth it! Once that’s done though and the credits roll, there’s still plenty that can be done for ingame unlockables that may not have been acquired and plenty of PSN trophies that will probably still be waiting for you to unlock them.

Sadly not everything on this journey was perfect while I played off of the PS5. I found myself quite a few times having Firegirl, both the character and the game, freeze on me making me have to close it, re-launch it and then re-do the stage that I was already close to finishing, or a new one, all over again. There was also another glitch where I found myself completely upside down making me have to do the same thing as trying to finish the forest stage while also zoomed out was just impossible. So while I would have liked to score this higher, the issues that I would run into, especially when grabbing a Fire Tome and having the game crash, keeps it lower than it should be.

Overall though, Firegirl: Hack 'n Splash Rescue DX is a fun little rogue-like / lite that can easily net you half a dozen hours to complete the main story before sticking around for more. With easy to pick up controls, especially with the PS5’s locking shoulders which makes shooting water that much more precise, if you’ve been looking for a bit of a challenge but not one that will cause you to rage quit, this could be the one for you.