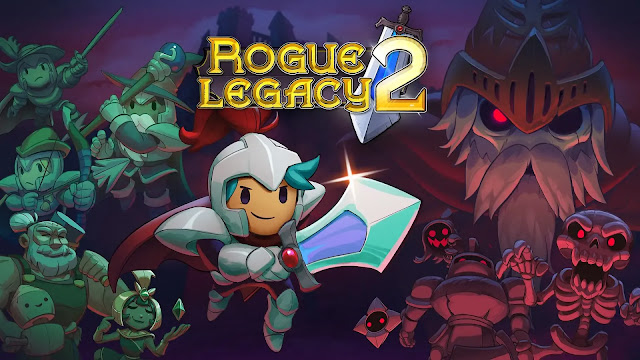 Rogue Legacy 2 by developer and publisher Cellar Door Games—Microsoft Xbox Series X|S review written by Nick with a copy provided by the publisher.

Having first released nearly a decade ago now, Rogue Legacy is now the ancestor that has passed along some of what it was, while yielding something unique to its next generation. The original Rogue Legacy had that addictive ‘one more run’ gameplay mixed with a handful of different roguelike elements. Rogue Legacy 2 takes a lot of those same fundamentals, mixes them up a bit and manages to create something that somehow feels both familiar yet fresh in an experience that is difficult to put down.

You start off a simple knight, venturing into a tower where you learn the basics of Rogue Legacy 2. The same vibrant visuals as the original are here, just a bit more punched up in terms of animations on the screen and variety. The presentation is just rock solid, with music that matches the graphics beautifully. There’s a lot going on at times visually, and that’s part of the challenge as you try to navigate spikes, jumps, projectiles and enemies. 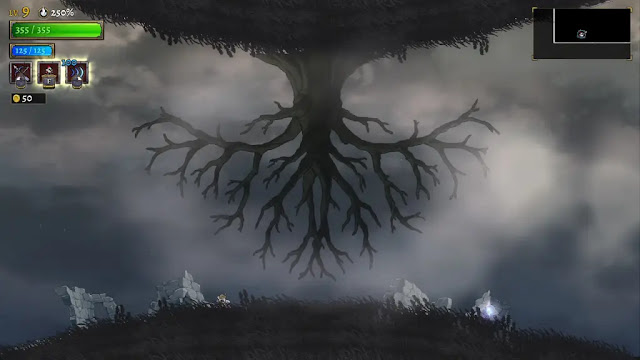 The core gameplay is still run, jump, attack – but there’s a lot of small twists added. You can unlock new abilities by undergoing certain trails sprinkled along the way, and man – some of these are hard. But eventually you’ll learn the ability to read messages left behind, or dash in the air and more. The best part is, these abilities carry over when you die. In fact, one of the things that can be most hit-and-miss with me and roguelikes is whether or not they are too punitive. I’m fine dying a lot, but I don’t like the feeling that I am no longer progressing. Rogue Legacy 2 does a great job of making almost every run feel at least slightly fruitful.

This comes in a couple of different flavors. For one, as you fight your way through the tower, you earn gold. When you inevitably die, you pick from one of three ancestors who have various traits and abilities and classes (more on that in a bit) and then you go to your castle, where you spend gold to unlock new classes, better stats, some in-game perks, or just purchase and make things in the shops outside your castle as well. These bite-sized progressions seldom make a big difference on a single run, but their cumulative impact can be felt over several.

There are some other elements that can persist, such as unlocking pizza routes (I laughed when I discovered this), or spending a percentage of your gold each time to lock down the map of the tower and prevent it from getting procedurally generated after you die, and some gems you can buy that grant you particular boons along the way as well. 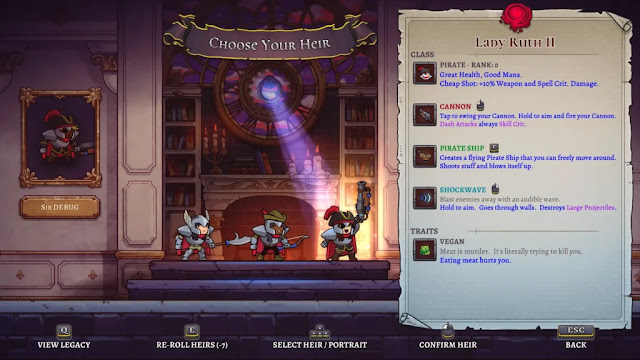 Like the original title, Rogue Legacy 2 has a lot of abilities and powers to discover. I think my absolute favorite (at least to laugh at – it was stupidly challenging and you were never going to win with this run) was a character wielding a peace sign. You could knock enemies back with it – but you couldn’t kill them. But it had a massive gold find modifier that made exploration fruitful, but combat borderline pointless. There are a variety of traits and weapons that can be found on randomly generated characters, and this also helps to keep runs fresh as you may not always have your preferred class available.

Classes are a great wrinkle in Rogue Legacy 2, because they are fundamentally the same with jumping, attacking and a special skill. Some of the classes are more closely aligned to one another (like melee classes such as Barbarian or Valkyrie) than others (Mages and Rangers are slower, more thoughtful classes as you try to figure out how to eliminate enemies from range). You can even unlock an ability to earn experience towards classes, and as you use them more, they grow more powerful. Again, you’ll die – but that sense of progression persists.

However, beating Rogue Legacy 2 is going to take a lot of work. As I mentioned above, there’s a hecticness to the gameplay that often keeps you from getting to strategize your best approach. There are some baked in puzzles and some interesting enemy placements that will reward thoughtful approaches – but there are times when you enter the room and are almost immediate besieged by flying daggers, projectiles that can go through walls and enemies that will dash at you as soon as you are on their plane. Sprinkle in some jumping and some environmental hazards such as spikes, and you will have your hands full. 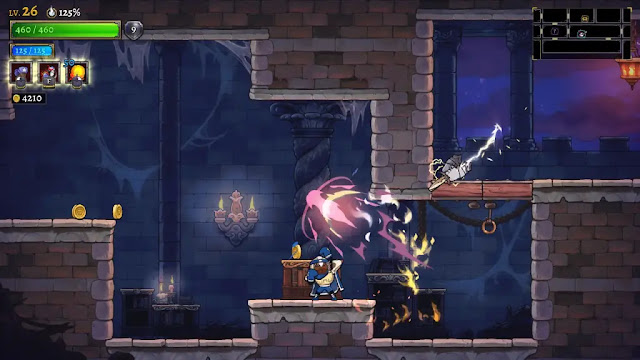 Thankfully, for those looking to progress but perhaps lacking the twitchy hand-eye coordination needed to best some of the areas, there is a ‘House Rules’ option that lets you apply some cheats to the gameplay. You can make enemies hit more weakly, or have less health. You can negate most bodycheck damage (but keep in mind weapon swings and projectiles will still damage you) and more. The biggest game breaker is the ability to fly (as opposed to having to run and jump) – but even that has a caveat as getting hit while in flight will cause you to fall to the ground, making it even more important that you avoid projectiles and don’t get lazy while soaring around.

Rogue Legacy 2 is a delightful mix of action-platforming with enough progression elements baked in to keep the many deaths from getting too frustrating. Unlocking new areas of my tower or discovering new traits was enjoyable, as was trying out new class / weapon / ability combinations with each new generation.

Rogue Legacy 2 is a worthy successor to its ancestor.