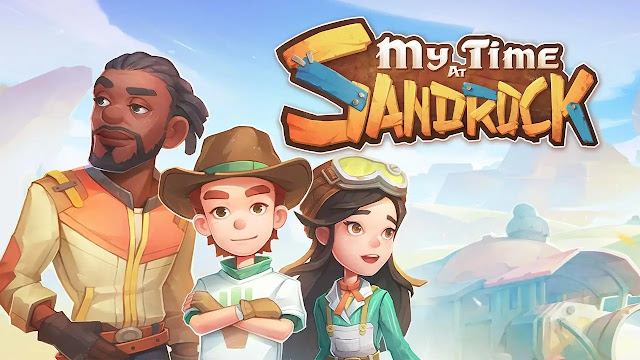 At long last, the eagerly-awaited sequel of My Time at Portia comes My Time at Sandrock and I'm excited to finally review it. This game had a long and tumultuous delay due to licensing issues. Released in Early Access is the successor to My Time at Portia where I have sunk over 400 hours into. Sandrock like Portia is part of the Free Cities Alliance which explains the appearance of a particular character from the first game. It is a sandbox RPG game and life simulation, thus I was all over it. Plus, I think it rates really high for me. 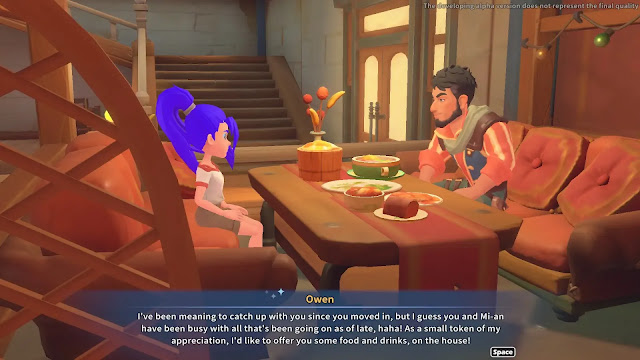 My Time at Sandrock is a wonderful life sim and RPG game that begins with a novice builder answering the call to aid of the fledgling town. The notable first improvement of the game is the customization options in the character menu. Players are able to adjust the length of their hair and have several more options than in the previous game. I immediately went for purple hair because purple is the best color.

The second most notable change in Sandrock is the scenery. Unlike Portia where trees grow aplenty, in Sandrock it is bad practice to chop down trees. Immediately this strikes me as a game that wants to show the cause and effect of human interaction and the environment. Gameplay-wise, this requires players to rely on salvaging old broken-down vehicles and items for parts. So far, the game has a great message but it continues to improve throughout gameplay.

Like Portia before it, players are sent tasks to build various items that help the town prosper. As they fulfill these tasks, players can pick up additional jobs from the commerce board or from other characters. There is mine hunting, research disks to analyze, town meetings, and even pet interaction like we’ve come to expect, but each element has improved dramatically from the first game. 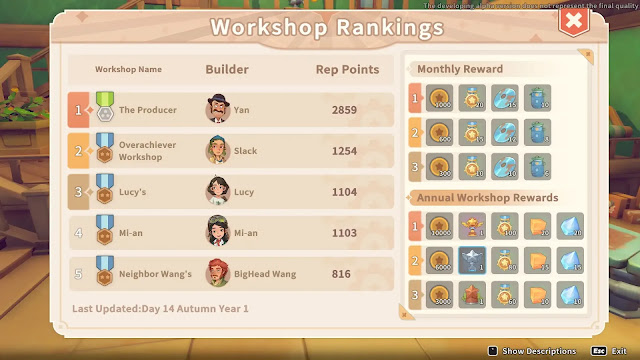 First, let’s talk about some of the quality of life changes that make Sandrock a massive improvement from its predecessor.

●     After picking up missions, players often go to their crafting bench to make whatever item is needed. While this is an aspect available in Portia, Sandrock shows the items needed for commissions but also displays how many items you own and you can craft. This is true even if the items are in storage containers.

●     The assembly station is critical for building a variety of items needed for the town. Sandrock has made building those items easier by giving players a cycle button, allowing us to switch to components that we already have. No more hunting for where components go!

●     The combat is fairly basic but looks more satisfying. Players break an enemy’s bar to interrupt their attacks. And while on the topic of combat, players also have an innate healing ability making it easier to survive encounters.

●     There are more character customization options than in the previous game and it looks better graphically.

●     In the mines, the ore is separated from the ground and into nodes, making materials easier to obtain. Additionally, players don’t need to dig as far down in order to find artifact pieces or other materials. But that’s not all! Players are finally able to mine while the scanner is active! It even remains on for a bit of time before shutting off.

●     Farming is better streamlined in Sandrock. Players get an all-in-one tool that shows all of your seeds, fertilizer, and water availability. 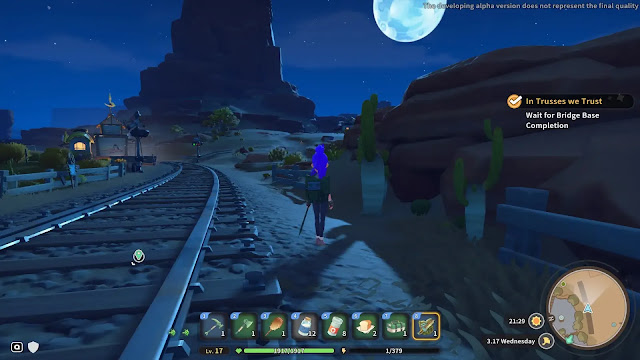 There is plenty more quality of life changes in Sandrock that could be listed but this gives people an idea about the game improvements. Overall, these changes are excellent, particularly the assembly station material placement! I don’t know if I could ever go back to Portia because of this change alone!

The combat in Sandrock is not a blockbuster hit, but it is visually entertaining. Sandrock’s combat system is rather simplistic but flashy. The gameplay focuses more on the other aspects than it does on combat, but honestly, this doesn’t take away from my enjoyment of the game. Combat doesn’t need to be intense for a game to be a hit.

Regardless, players get to choose between a couple of different weapon types but fundamentally it doesn’t change the combat difficulty. That said, there is a skill tree where players allocate points to improve their maximum HP or increase the damage dealt by weapon type. Distributing points in specific weapon knowledge allows players to combo their attacks. Depending on the type of weapon, most of them give the ability to combo five hits on an enemy, which is oddly satisfying. 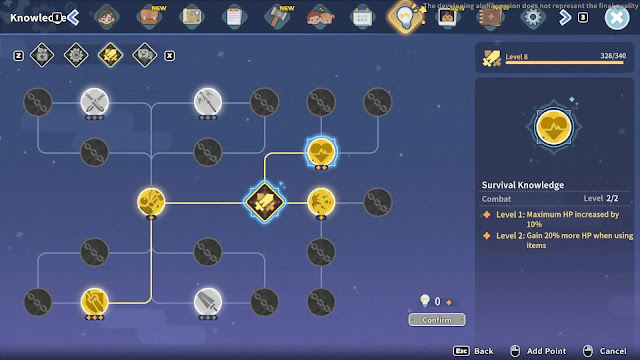 My Time at Sandrock adds a new element to the core gameplay loop which introduces building maintenance. Each machine still needs topping up with fuel, and also has to be regularly swept of sand. In the desert, players encounter strong sandstorms. To continue their work, players equip protective headgear. It also means that the crafting machines will clog up with sand particles. If the sand builds up too much, the machines will stop working. As such, players craft a feather duster to periodically wipe away the sand.

What also sets Sandrock apart from its predecessor is the requirement for water. The desert doesn’t have many water sources and the large pond in the town is the primary source of water. Machines that players use to craft objects require water to run, meaning they have to keep an eye on their consumption. Thankfully, crafting dew collectors is key to a builder's survival. Otherwise, purchase some at the water tower maintained by Burgess. The skill tree has available abilities like water conservation which also helps to conserve water! 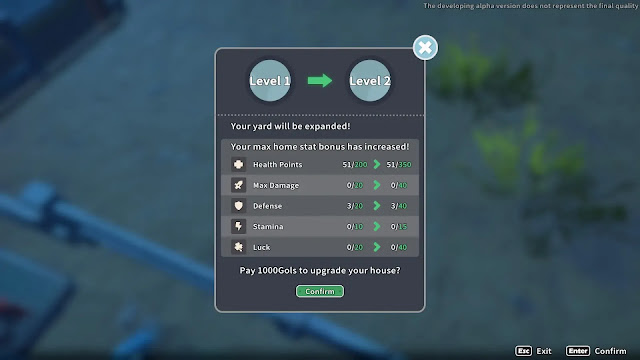 Sandrock does a lot more than Portia did in terms of its story progression. It feels much faster because there is less downtime between story events. Where Portia’s mission to craft a bridge felt like it took forever to complete, Sandrock’s objectives seem easier to fulfill. Perhaps this is due to the ability to mine specific ore nodes which makes it simpler to stock up on materials. Or maybe I felt it was faster due to having the ability to get a basic supply shipment earlier in the game. It just felt like I didn’t *need* to run into the mines every day to collect materials.

On top of the game’s cadence, I found that I related to and liked more of the townsfolk than I did in Portia. The Church of Light members care about their fellow townsfolk in Sandrock. For example, quite early in gameplay, Burgess visits your workshop to do a quick survey on your mental health. Adding this acknowledgment in a relaxing RPG game like Sandrock made me smile and I respected the Church of Light more.

But this wasn’t the only aspect of character engagement that hooked me into the story. I enjoyed listening to Cooper babble on about whatever was on his mind. Even the dialogue options let players tell him to get to the point or keep going. As a chatterbox myself, this character amused me because I was half expecting my character to pass out from boredom. 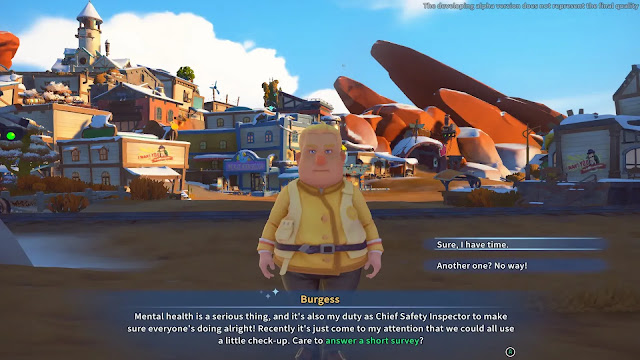 Another thing I love about the character interaction and story progression is the helpful rival. When you arrive in Sandrock, another person has also answered the call for aid. Mi-an is a fellow builder that is kind-spirited and rather friendly. Unlike what’s-his-face from Portia, the drive to complete commissions was more of a friendly rivalry as opposed to all on war. I didn’t really like the egotistical manner of that character from Portia. Mi-an is much more interesting. Players even assist her in a critical investigation later in the story, which also makes me feel like I'm a part of the town.

My Time at Sandrock has a number of unique mini-games and events that players experience. One of the first events that players can participate in is the experiments with Dr. Fang. On specific days, players can head over to the medical clinic and try one of Dr. Fang’s concoctions. Some of these experiments go well while others do not. I think my character ingested a minor poison at one point, but thankfully it didn’t affect much in the way of gameplay. Regardless, this event was amusing.

Later, we get to play wack-a-mole at the arcade with one of the townsfolk. Not only was this event fun, but participation in the event harkened back to the concept of mental health. All work and no play make for stressed individuals. This event isn’t a throwaway concept about how protecting one's mental health is key to a healthy life, but a reminder. In this way, I praise Sandrock for this inclusion. And if that isn’t enough, wait until you try Yakmel racing! I had too much fun with that event. Seriously. 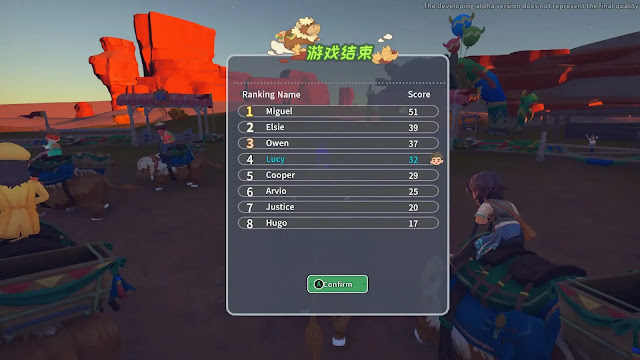 Early access titles are rife with issues. As such, I expect there would be minor grievances throughout my run of the game. Presumably, these will be rectified through the early access phase but here are some of the issues I encountered:

●     When on horseback, the animal tends to get stuck at the top of the stairs. Horse-riding is quite smooth in Portia, so I hope this is rectified quickly.

●     The longer you play the game, the more it loses stability. So, be sure to restart the game after a couple of hours. And remember to save often.

●     Out in the desert, there were some rocks that were missing their textures. They appeared as 2D purple shapes.

●     One of the missions doesn’t clearly show where to go. It displays the mine entrance, not the meetup point before arriving at the mine.

●     Every now and then, a popup box or dialogue would appear with unreadable text. Usually, I would see a string of characters, presumably a dialect of Chinese. I’m hoping that all text displays in the proper language selected by the user in the future!

●     Certain navigation aspects on the controller are not well optimized. While this isn’t game-breaking, controller navigation needs a bit of love. That said, playing Sandrock on keyboard and mouse is fantastic, so don’t hold this point against the game! 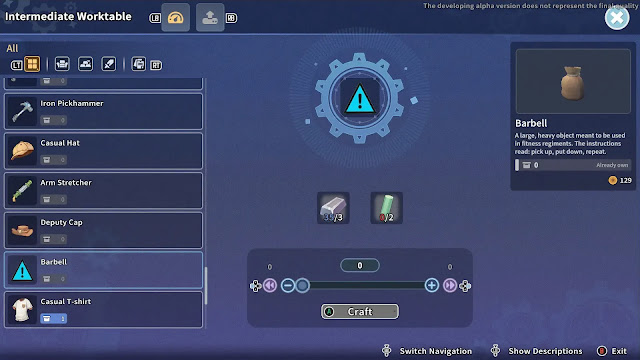 My Time At Sandrock is a much better game than its predecessor. I felt that I was much more invested in the story, the characters, and the events. Even though it felt like we were doing more to maintain our workshop, I didn’t feel bogged down with any aspect of the game. In fact, I love this game so much that I already have about 80 hours of playtime! The graphics are much cleaner, many gameplay aspects are greatly improved, and I’m much more invested in the world than I was with Portia. All we have to do is wait on the multiplayer feature and it'll be mostly perfect!

Fans of My Time At Portia need not look any further than purchasing My Time At Sandrock. This game builds upon a solid foundation and is much better for it. Special attention was paid to a vibrant and realistic world that is environmentally conscientious, includes diverse characters, and showcases positive mental health messaging.

Players familiar with the previous title will enjoy almost every aspect of Sandrock to a point where they will easily lose track of the time. Because Sandrock impressed me, even in the Early Access stage, it’s fair to say that it is game of the year material!