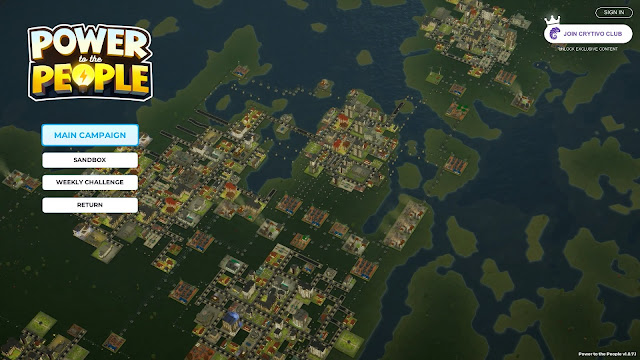 Power to the People by developer Hermes Interactive and publisher Crytivo—PC (Steam) review written by Susan N. with a copy provided by the publisher.

Power to the People is a management simulation game that lets players focus on maintaining a functioning power grid. Players don’t need to worry about building up a city as it increases in size progressively. This allows players to be challenged organically. Players are given a few different power sources, a tech tree, and adds natural disasters to keep players on their toes. It is a fun game to play but doesn't offer much in replayability.

Other management simulators are where players have to split their attention between traffic, health care, schooling, pollution, and other aspects of city management. Power to the People focuses solely on maintaining and stabilizing a power grid. Should players fall below 50% power distribution, they automatically fail the campaign map and will have to begin again. In order to keep power consistent, players have a variety of options like wind power or diesel power. Additionally, players have access to a tech tree that allows players to upgrade the amount of voltage distributed through the power lines. Players can also increase the power storage capacity. They can also create ad campaigns to boost the city’s morale when power efficiency isn’t high.

For players who like to be challenged, there are two modes to choose from. First, there is the regular mode which passes daytime hours fairly quickly and pauses at midnight. Players are then able to make any changes or add buildings to succeed. The other mode does not have a pause option which requires players to think quickly on their feet. While the day moves at a steady rate, players have the option to speed up the process even further. 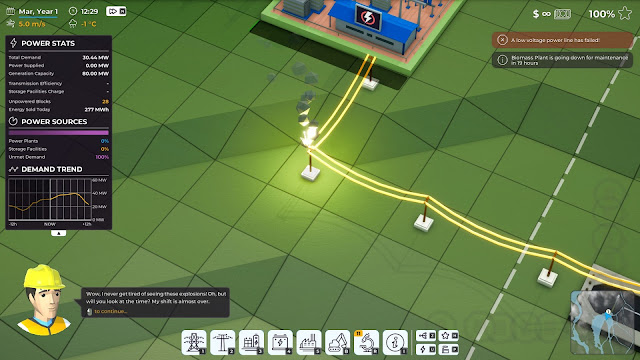 There are a couple of challenges beyond budgeting between massive spikes in power consumption. First, a unique feature of Power to the People is the fact that power plants will periodically undergo maintenance. This challenges players to have power storage facilities or redundancies to pick up the slack. In early gameplay, I found myself struggling to have the cash to keep the cities afloat because of maintenance. To compare an element of this title to Cities: Skylines, when you build multiple generators at once, they will often go into maintenance mode at the same time. In Cities people will generally die at the rate you erected the residential buildings. Thus, some of the strategy lies in staggering the building of multiple generators.

Another unique feature of the game is the fact that natural disasters will occur while you are managing the power. This often causes issues if your power lines or your generators are struck by lightning. In fact, the giant ‘boom’ sound causes players to frantically look for the striking point. Nonetheless, players must focus on maintaining and stabilizing the power to complete the campaign objectives to move on.

Players have to deal with setting up an effective power grid, but they must also watch out for potential incoming problems. This means that players must plan accordingly. What is readily apparent is that players need to be mindful of where they put their power lines as there is no refund for demolishing them. As such, Power to the People has a wonderful core gameplay loop. However, I’m not sure about its replay potential for people who enjoy titles in this genre. 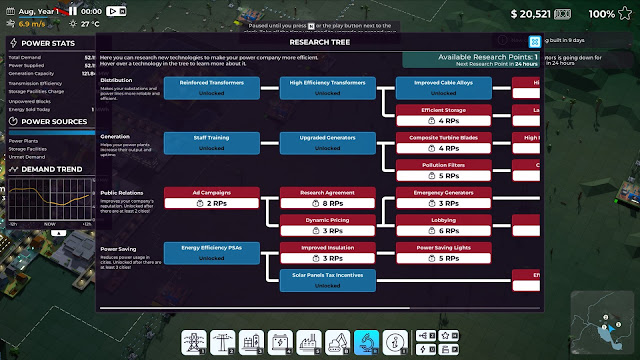 As with any management game, there are a number of inclusions with respect to the UI that assist the player in campaign success. Notably, on the left of the screen lies a graph that shows the upward or downward trend of power needed. If that isn’t enough of an indication to boost power production, on the top right of the screen will be notifications like ‘10 days until generator maintenance’. Another one might state ‘14 days until a new city.’ These indicators help players determine when to boost their power production. Alternatively, they can add power storage facilities to handle the load for a period of time.

One of the other important factors to note is the various overlays that players can enable. An important overlay to look at is the power line usage overlay. It shows how much power is running through the lines. This allows players to determine if any of the lines will overload and it's critical to head off any issues. There is also a Satisfaction overlay that shows how many of the citizens are happy with the distribution of power. Another useful overlay is the NIMBY overlay (Not In My BackYard) which shows the radius that pollution (noise or environmental) will bother citizens. Finally, there is the power demand overlay which shows how much power each building requires to function at a hundred percent capacity.

Power to the People does a great job of giving players a lot of information through graphs and popup windows. 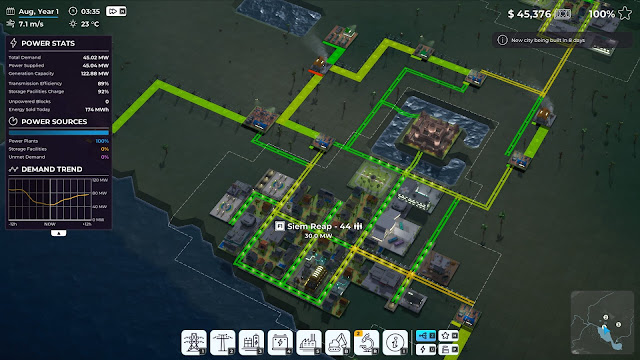 There are elements of the game that I dislike. For one thing, the game can be fairly tedious. In the easy mode of the game, players wait for the day to pass before expanding. If not for that, then the day passage is often chalked up to waiting for an influx of cash. This is clearly something that is more important in the early part of gameplay.

Because the focus on the game is to provide power, there isn’t much to do other than wait. Yes, one could argue that that is what the harder version of the game is for. I still feel like the gameplay loop may lose its luster over time.

Otherwise, the game has a lot of wonderful features that I appreciate. The graph that shows projected power usage on the left of the screen is incredibly useful. Also, the ability to see when a new city erects helps players strategize their next move. Finally, I like the overall concept. Power to the People isn’t focused on everything of city management. It focuses on one aspect that people often take for granted. While the game doesn’t seem like it would be enjoyable after one playthrough, it is a fantastic title for those who want a focused objective. 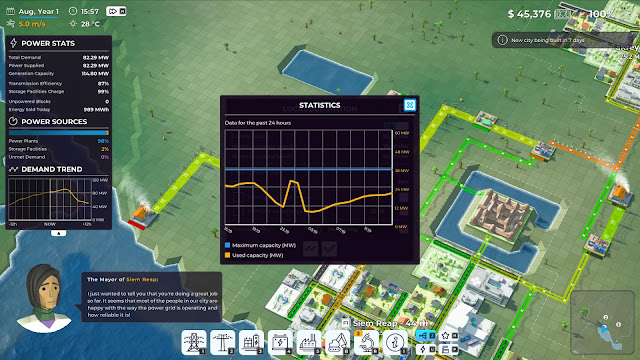 Overall, I really enjoyed Power to the People. It’s a fun and relaxing simulation game that tackles city management in a different way than others in the genre. It runs incredibly well despite the low poly graphics style. Power to the People has a nice aesthetic that players of all ages can enjoy.

That said, there was at least one thing that bothered me about the gameplay. Power lines don’t refund you any money! Only buildings will offer a refund, meaning players have to be mindful of power line placement. While this isn’t a problem, I felt that the extra cash would have helped my gameplay. 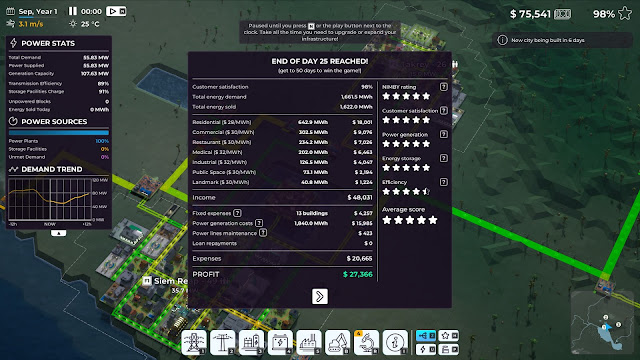 “Power to the People is a relaxing game and I found myself rather pleased with it. It’s a game that challenges people at a level that they feel comfortable with. That said, while the game is solid, I feel as though there isn’t a lot of replayability. Additionally, the tech tree adds flavor and assistance to the player, but it’s a feature that management simulation games possess making it common place in this genre. Regardless, if management simulation games are your style, this is a great entry level title to pick up. It helps that it isn’t expensive either!”