So I generally have an unwritten rule in which I don't do horror. I'm a chicken shit and things that go bump in the night keep me up at night with a night light. It's just not my cup of tea but every now and then something catches my eye and I get a sprout of bravery. The Medium, by the Bloober Team which have done both the Observer: System Redux recently covered by Nick and the Blair Witch covered by Izzy, is what I decided to be brave on and in some ways, mistakes were made but they were worth it even if I've had a few sleepless nights because of it.

Taking the role of Marianne, The Medium starts off with her talking to someone off screen making it fairly easy to get invested as it feels like she's talking to you about events leading up to this point in her life. Recently deceased, it fell to her to prepare her foster father for a viewing as she made her way back to the funeral home that he ran. Getting a bit of a taste for the mechanics involved, Marianne will soon get a phone call starting this horror show off for real.

Making her way up to a government resort named Niwa at the behest of someone on the other line of a telephone, it soon becomes clear that this won't be a vacation as the resort is run down and in ruins with vegetation having started to reclaim it. With the potential that whoever called no longer being present in the world of the living, Marianne heads in to find the voice from the other end of the telephone line with answers to her condition that she never thought she would find. 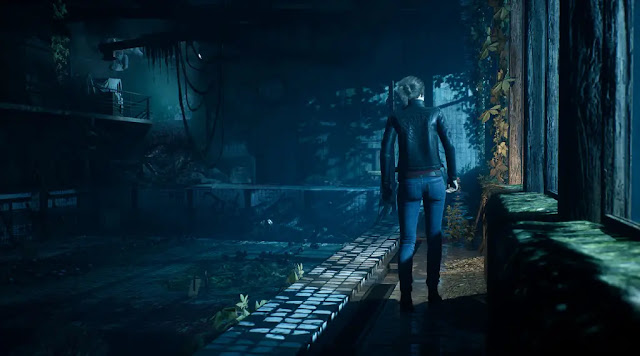 There's a lot that I would like to say about The Medium but I'll start with the first thought. Wow. Graphically the environments that you'll be walking Marianne through are detailed making it really easy to want to explore and find out what secrets it's hiding even if it's haunted as hell. Mechanically the controls are basic enough with you moving through the environment and checking out points of potential interest but it's Marianne's ability that steals the show.

On a general principle, we know that mediums have a sort of power in order to sense the departed or supernatural. It comes in a few flavours from basic senses to outright communication with the beings no longer from or from this world to start off with. Taking it to another level, Marianne depending on the power of the forces involved will quite literally exist both in this world and the world beyond simultaneously. She can move through both walking, touching and affecting her environment either through either realm.

While this would be in a sense nothing new to the worlds that we explore, Marianne's adventure takes it a step further as you quite literally move through both at the same time needing to check both surroundings simultaneously for clues or hints of what's required in order to move forward. Appearance wise they couldn't be more different from one another so there's a bit of an adjustment the first few times, but eventually it becomes natural enough to be looking and exploring both without realizing you're looking at two whole separate sets of visuals. 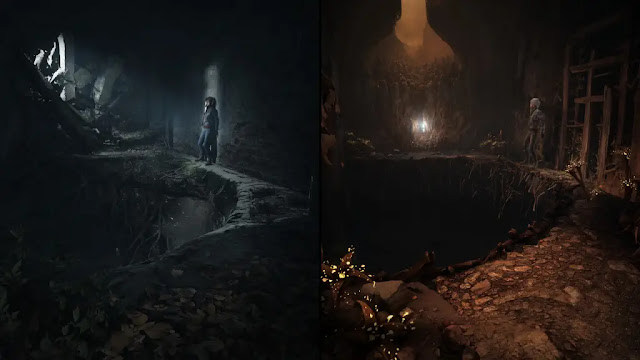 From there, the rest boils down to puzzle solving assisted by some fairly well written and voiced dialog. From Marianne herself to others that she'll meet and others who will forever remain disembodied voices, each character lends itself to helping build you into the immersion that, if like me, wi have you jump a few feet off the couch at times on a scare that you really didn't see coming. This is only helped, and worsened for me, as the ambient noises and haunting tracks were glued to my ears with some pretty hefty headphones. The opening screens before the main menu do say for best experience use headphones and they weren't lying.

Not to simply settle in for the same style of gameplay over the course of the dozen or so hours that The Medium can take, and avoiding a fair amount of spoilers, there is going to be some going back and forth between the real world and the spirit world alongside the split screening. While in one world or the other, you’ll still be affecting things in the other but while in the real world for example, Marianne is a lot more vulnerable than she would be in the spirit world with some of her abilities which will also cross over through the split screening. 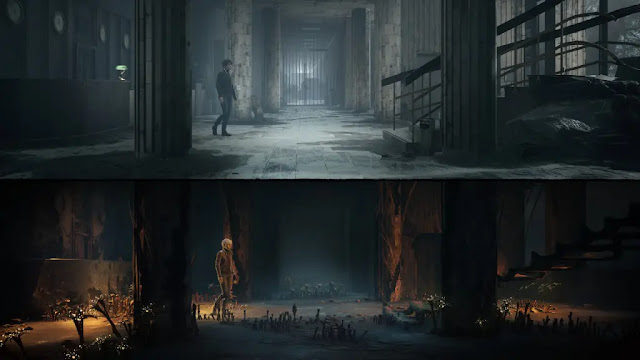 On a final note, it’s rare to find nothing wrong with an experience. The writing, the ambient noises, the music, the dialog, and the interaction with the world are all spot on and playing on an Xbox Series X with a 4K television really helps to sell the visuals. If I had an issue or two it may be that at times certain objects were not quite as responsive due to the angle that Marianne would be standing at or that I did hit a glitch once or twice causing me to restart from the previous autosave because something stuck. Otherwise? This was a fantastic experience.

While I don’t generally sit down to horror, or horror like experiences, the Bloober Team with their atmospheric and psychological horror The Medium had me hooked from start to finish. With a very well paced story and solid mechanics that let you explore the run down resort that Marianne finds herself in, it was really hard to put down the controller as the secrets that often lay right around the corner just begged to be answered. Score: 9 / 10