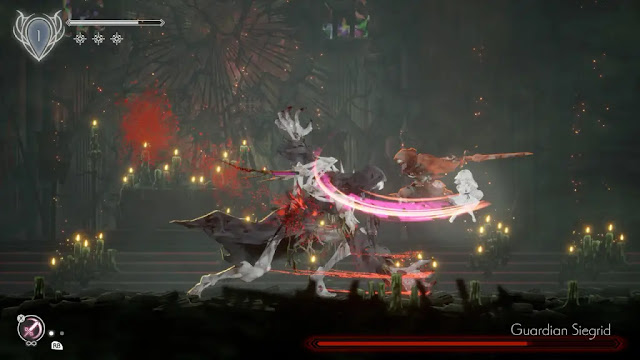 ENDER LILIES: Quietus of the Knights by developers Live Wire | Adglobe and publisher Binary Haze Interactive is one of the latest Metroidvanias to hit Early Access. Acting as an example of exactly what to do, Ender Lilies can easily stand beside some of the better releases in the past few years such as Hollow Knight, Guacamelee! 2 and Salt and Sanctuary and it isn't even finished yet.

Our tale starts off with our protagonist Lily waking up in a crypt and being met by a spirit who both offers you his sword and to fight for you. This immediately had me thinking of a few things and brought back some nostalgia to a less popular Castlevania on the PS2, The Curse of Darkness as well as Nights of Azure where you have spirits lending you a hand in the fighting. The difference here though is that Lily herself does not fight. She can run, jump, dive out of the way and harness powers to double jump and pass under water. But she herself? Lily only commands the spirits at her disposal.

This honestly could have gone one of two ways. On one hand, it could have been a brilliant idea and simply not work, or, it could work as well as it sounded and make the adventure that much more for it. So going the second route, spirits come in two main formats. The first are those that can be used infinitely while the second have limited usage. With a total of six in two groups of three that can be quickly swapped between, mixing and matching to suit your playstyle and even having the same spirit in both loadouts is easy.

Where things become a little less easy is that these spirits need to be defeated in combat before Lily is able to harness their power. Set in a dystopian world which has been all of the rage for the past few years especially when looking at Souls-like and Soulsborne entries, and Lily’s adventure fits right into that atmospheric mold even if the gameplay does not. If Lily falls in combat, she simply wakes up from the previous safe place that was visited. This could potentially change moving forward in which a portion of the accumulated experience is lost and must be re-collected which would make this a Soulslike, but for the moment, it’s strictly a Metroidvania. 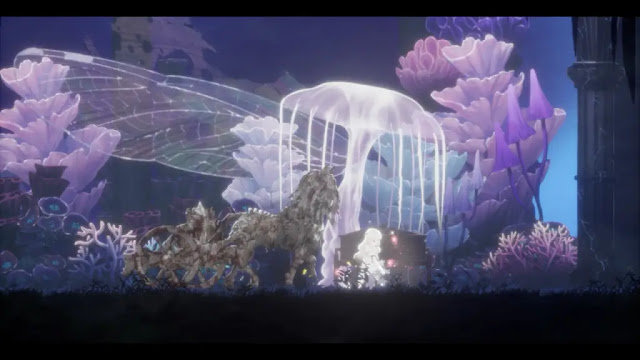 The reason for the tangent above is that Ender Lilies while not a Soulsborne feels like one and on that note channels a bit of Code Vein above the rest for the design style of enemies. Plagued with a blight that has turned everything mad, enemies are designed with dark color palettes which incorporate glowing red elements. Fighting through these enemies to figure out both who she is and what happened to everything, and Lily among the grunts will come across both Mid-bosses and main bosses. Both of these once defeated will become spirits that Lily can use to move ever forward with both their combat prowess and the special abilities that can come with some of them such as being able to double jump, break through elements in the ground and create an air bubble to move underwater.

This leads into the last two things that Ender Lilies has really nailed down in terms of design. Boss fights and the music behind them. The musical scores are just amazing to sit down and listen to with the variety of range that they have and only help to amp up the boss fights as the music changes as the fight goes on. While Mid-Bosses are never really anything more than stepping stones, real bosses go through essentially three phases. The first shift is a subtle one as there may be one extra move thrown into the mix and the music may not shift but by the third phase, the appearance, the music and the difficulty are all thrown up a notch and what may have seemed like an easy fight moments ago is now an actual fight for you life.

It’s brilliant and even after dying multiple times to some bosses, I still kept coming back for more. It’s more than the GitGud syndrome as Ender Lilies isn’t THAT hard, but, it takes some time to make adjustments as new moves mean different approaches and those will take some time to learn unless you are already that good at it all. Each of these fights also felt unique and not a carbon copy / copy & paste meaning you never really knew what you were in for when walking through to get the fight started. 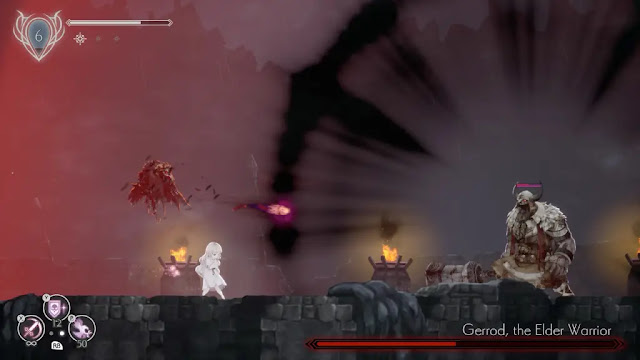 Lastly, between these epic fights there is going to be a ton of exploration to be had and here too was well done. Like any Metroidvania, there are some things that you’ll notice immediately and know that you cannot pull off while others you may try a few things and either succeed or know that you’ll have to come back. It’s here that I found one of my favorite features. As you explore further from the starting point, you’ll be uncovering a map with points that let you know roughly which parts of that segment lead outwards which roughly lets you plan your approach. A bonus to that though is that the shading of those squares on the map lets you know if you’ve collected everything that can be, or if there’s still something left to find. Knowing this from the very beginning helps tremendously as a few times I had to change directions because I simply couldn’t make it any further.

Now, while ENDER LILIES: Quietus of the Knights is an Early Access title and amazing so far, there were a few small hiccups here and there but they were mostly easy things to ignore as it’s clear that they are items on a current to-do list. An example of this would be that the audio tracks for cutscenes after defeating major bosses skip in and out as well as break the frame rates of the animation. If it killed the application that would be one thing, but it’s a small thing to sit through as moments after you’re back out on the road with Lily and her spirits to find the next path forwards.

All in all, with only four of the listed ten chapters currently available before seeing the dreaded this is as far as the Early Access version currently goes, ENDER LILIES: Quietus of the Knights is shaping up to be an incredible experience. With a so far well balanced combat system, incredible music accompaniment and some crazy multi-stage fun boss fights, fans of the style will have plenty to look forward to as development continues to bring the full version to both the PC and the consoles both old and new.